The hepcidin-ferroportin axis is known to play the essential role on iron homeostasis in human. The binding of hepcidin to ferroportin (FPN) on the membranes of iron-exporting cells induces the ubiquitination of FPN and thereby decreases the delivery of iron to plasma. Low hepcidin with high FPN was well established in patients with ineffective erythropoiesis, e.g. beta-thalassemia major and myelodysplastic syndrome. On the other hand, studies showed increased hepcidin accompanied with decreased FPN in patients with some cancers. Further, anemia in multiple myeloma and Hodgkin’s lymphoma were reported to be associated with high hepcidin levels (Blood 2008;112:4292). Here, we investigated the function of the hepcidin-ferroportin axis in childhood acute lymphoblastic leukemia (ALL) survivors who completed chemotherapy.

Thirty-three children, aged ≤18 years with ALL and completing TPOG-ALL-2013 protocol before June 30, 2020, were enrolled (ALL-off Gr). According to the treatment protocol, they had been classified as standard-risk (SR) in 20, high-risk (HR) in 12 and very-high-risk (VHR) in 1, respectively. Thirty-eight healthy siblings were assigned as the normal controls (normal Gr) after exclusion of acute illness and iron deficiency. Twenty newly-diagnosed ALL children (ALL-Dx Gr) who did not have sepsis at diagnosis (Dx), and 13 patients with beta-thalassemia major (TM Gr) who received regular transfusion were also enrolled. Serum iron, total iron-binding capacity, ferritin, hepcidin and FPN were collected at Dx in ALL-Dx Gr and at 6-month follow-up after completion of chemotherapy in ALL-off Gr. Selected biochemical assays were checked in normal Gr and TM Gr on the day of routine RBC transfusion. Hepcidin and FPN levels of peripheral blood were measured using ELISA kits (DRG, EIA-5782 for hepcidin & Elabscience, E-EL-H2355 for FPN, respectively).

The clinical features and biochemical data of all patients are shown in Table 1. The hepcidin and FPN of normal Gr were comparable with those of reference papers. The low hepcidin, high FPN and relatively low hepcidin/ferritin of TM Gr were in consistent with those of published reports. There were no significant differences of age (P =.243) and gender (P =.899) between ALL-off Gr and normal Gr. The ferritin and transferrin saturation between ALL-Dx and ALL-off Grs showed statistical difference (P <.001 and P =.02, respectively). In figure 1, the hepcidin and FPN levels of ALL-Dx Gr were significantly higher than those of the normal Gr (P <.001). The trends remained but did not reach statistical significances between ALL-off and normal Grs. None of ALL-off Gr had mutation of HFE C282Y/H63D, HJV C119F or SLC40A1 C326S. Further, in ALL-off Gr, 6 patients had abnormal ferritin levels (>300 ng/mL; median, 871.55; range, 351.6-959.0)(high-ferritin). MRI scans of liver and heart from the 6 high-ferritin patients did not show any evidence of iron overload. In Figure 2, hepcidin levels were significantly higher in ALL-off patients with high-ferritin or receiving cumulative RBC transfusions >10 units. And ALL-off patients with high-ferritin, RBC transfusions >10 units or receiving HR/VHR treatment regimens had significantly higher FPN levels. Multivariate analysis demonstrated only high-ferritin predicted significantly higher hepcidin (P =.02) and FPN (P <.001) levels in ALL-off Gr.

The dysregulation of hepcidin-ferroportin axis showed high hepcidin and uncontrolled FPN hyperactivity at Dx of childhood ALL which may point to the impaired down-regulation of FPN by hepcidin. Our findings imply the impaired mechanism may not be fully recovered in ALL survivors after completing chemotherapy, especially those with ferritin >300 ng/mL, HR/VHR groups or receiving higher RBC transfusions. The routine monitoring of the axis function could facilitates the early detection of iron overload in liver and heart. 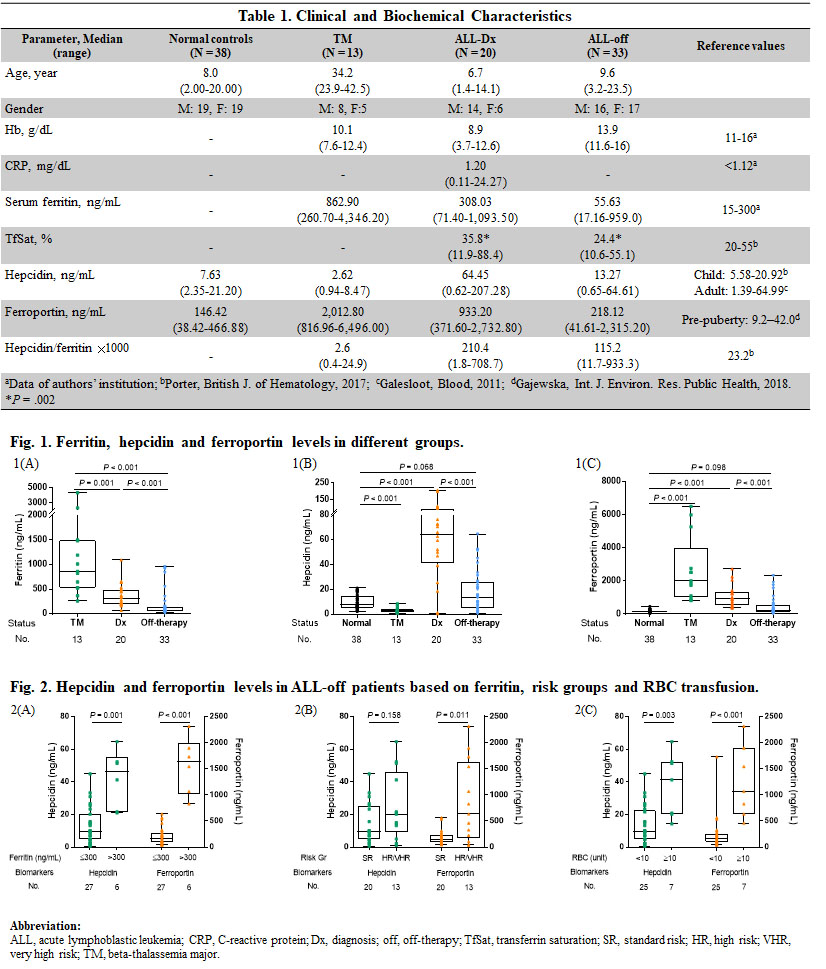