The multiple-dose pharmacokinetics and pharmacodynamics (PK/PD) of DISC-0974 was first evaluated in healthy NHPs in which regulation of iron metabolism is primarily controlled by BMP/SMAD regulation of hepcidin synthesis. Dose levels were selected to modulate the pharmacodynamic response (transferrin saturation [TSAT]) but to be either below saturation (0.6 mg/kg), or to saturate the TSAT response (3 and 60 mg/kg). As expected from the mechanism of action, hepcidin concentrations decreased following DISC‑0974 administration with return to baseline that was exposure dependent. The decrease in hepcidin was associated with increased TSAT, which DISC-0974 modulated in a dose-dependent manner. At 0.6 mg/kg, the TSAT response was maintained below saturation (~65%) after the first dose; saturation increased following subsequent doses, consistent with higher DISC-0974 serum concentrations. At the 3.0 and 60 mg/kg doses TSAT saturation (>85%) was achieved within 5 days post first dose and remained elevated through the end of the study, also consistent with the serum concentrations of DISC-0974.

In vivo efficacy of DISC-0974 was evaluated in an NHP model of inflammation-induced (IL-6) high-hepcidin to establish whether inhibition of BMP/SMAD signaling could effectively control hepcidin increases generated by inflammatory signals. In this study, monkeys were challenged with 6×104 IU IL‑6/kg on Day 1 and on Day 4. Groups of N=3 received 0 (vehicle), 0.6 or 6 mg/kg DISC-0974. On Day 11 all groups received a second challenge of 6×104 IU IL-6/kg. TSAT, hepcidin-25 and DISC-0974 concentrations were determined. DISC-0974 was effective in preventing IL-6-induced hepcidin increase in a dose-dependent manner in this model (Figure 1).

In summary, in healthy NHPs, administration of DISC-0974 causes reduction in hepcidin levels leading to release of stored iron from macrophages of the reticuloendothelial system, making iron available for erythropoiesis as demonstrated by the dose-dependent modulation of TSAT. DISC-0974 is also effective in preventing hepcidin increases caused by IL-6, which is generally regarded at the classical cytokine stimulator of hepcidin synthesis. Given the similarity of the mechanism of hepcidin regulation between NHPs and humans, DISC-0974 is anticipated to provide a similar effect in the treatment of anemia of inflammation in humans by lowering cytokine-induced increases in hepcidin and improving iron availability for erythropoiesis. 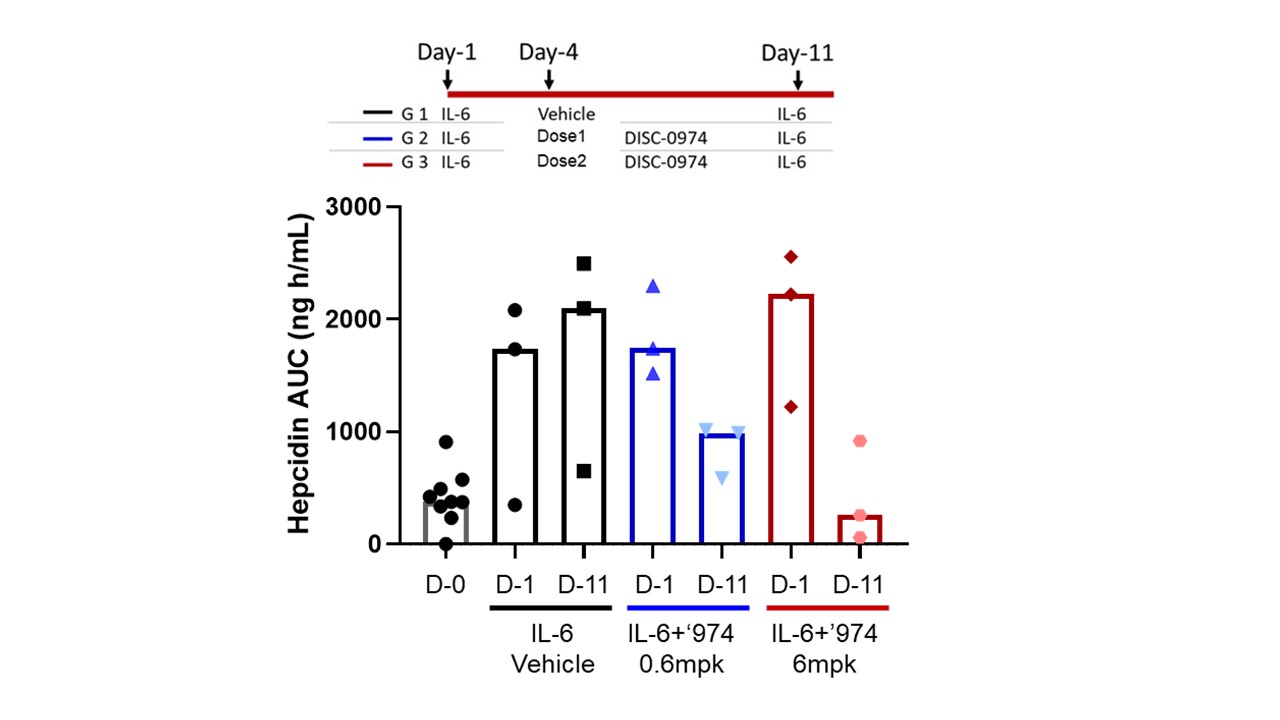