Background: Most IPSS low and int1 (lower) risk MDS patients with isolated del(5q) develop RBC TD or need treatment for symptomatic anemia early after diagnosis (median time to transfusion/treatment of 20 months, López Cadenas et al abstract 3180 ASH, 2016). Lenalidomide (LEN) is a reference treatment in MDS-del(5q) but approved in many countries only when RBC-TD occurs. LEN directly targets the del(5q) clone improving anemia and quality of life. Limited data also suggest a role of LEN in non-TD patients with del(5q) (Oliva et al Cancer Med 2015), but no randomized trial has assessed the efficacy and tolerance of early LEN treatment in this MDS subset.

Material: The Sintra-Rev clinical trial is a phase III European multicenter study in low-risk MDS-del(5q) patients with anemia (Hb<12g/dL), without TD. Patients were randomized in a double-blind design to LEN (5mg/day continuously) vs placebo (2:1 randomization) for 2 years of treatment and 2y of follow-up. The primary endpoint was the time to TD, secondary endpoints included erythroid (HI-E) and cytogenetic response (CyR) (all according to IWG 2006 criteria), overall survival (OS), event free survival (EFS), time to AML and mutational analysis (TP53 and other myeloid mutations). Here, we report results of the interim analysis after completion of the treatment phase in all patients (March 2020).

Results: Main clinical characteristics of the 61 patients (ITT population) included (Feb-2010 to Feb-2018) are summarized in Table 1: 82% females, median age 72 years (range 37-89), median time since diagnosis 3.6 months, median Hb at inclusion 9.8 g/dL (7.1 - 11.7) g/dL and 93% patients had isolated del(5q). Four patients were excluded due either to screening failure (1 pat) or failure to complete at least 12w of treatment (3 pat). Fifty-seven patients were included in the ITT evaluable population for efficacy and 59 for safety (2 patients did not receive any drug).

Fifty-eight patients developed at least one adverse event (AE) during the trial (no differences between the LEN and placebo arm), related to the drug 86.8% in the LEN and 33.3% in the placebo arm, respectively (p<0.001). Hematological toxicity occurred in 40 patients in the LEN arm (50% grades 3/4) and only 4 patients in the placebo arm (25% grade 3/4). At least one SAE was seen in 31.6% of the LEN patients compared to 4.8% in the placebo arm (p=0.022), not related to the drug. Nineteen serious AE were reported in 13 patients, 4 of them (2nd neoplasia, pulmonary embolism, febrile neutropenia and blurred vision) potentially related with the study drug, with no related deaths.

Conclusions: In this interim analysis we confirm that low dose LEN (5 mg) in anemic non-TD low risk MDS del(5q) patients prolongs the period of time to TD (75.7 mo vs 25.9 mo), improves Hb levels (72.5% of ER) and induces clonal responses (70% complete CyR), ie potentially more responses than in historical series of MDS del(5q) treated with LEN at time of TD, with a manageable safety profile, and no increased progression rate. Longer follow up will be required to assess the effect of early treatment with LEN, and particularly the effect of the early reduction of the del(5q) clone size, on long-term outcomes. 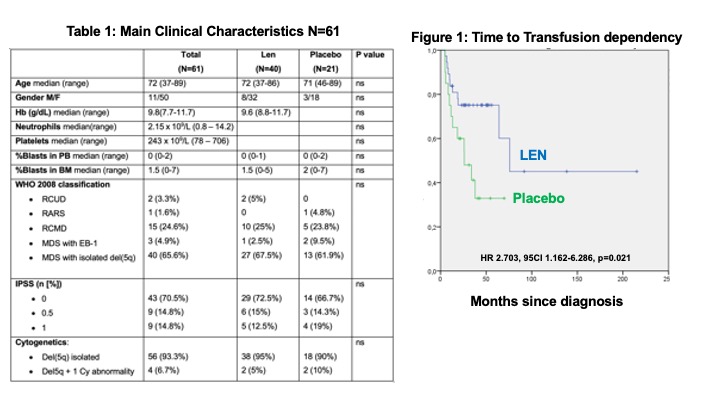 OffLabel Disclosure: LEN IN ANEMIC BUT NOT TD PATIENTS WITH LOW RISK MDS AND DEL(5Q)