537 DNA Methylation Analysis before and during Treatment with Azacitidine Plus Pevonedistat or Azacitidine Alone in Patients with MDS, CMML, and AML Previously Untreated with Hypomethylating Agents

Background: Clinical responses to hypomethylating agents (HMA) occur in the minority of patients with myelodysplastic syndromes (MDS) and related disorders and require months of treatment. Robust biomarkers of HMA response would have great clinical utility but remain elusive. Combinations of HMA and novel agents may improve response rates and latency and be associated with distinct biomarkers. Predictive baseline DNA methylation (DNAm) profiles have yet to be identified in MDS, although responders show more global hypomethylation after response occurs. DNAm changes shortly after treatment may add predictive power as they reflect additional factors including effective cellular exposure and the rate of DNAm recovery between treatment cycles. To determine if DNAm profiling at baseline and early during treatment can improve our ability to predict response, we examined targeted DNAm profiles in samples from patients with higher-risk MDS (HR-MDS), chronic myelomonocytic leukemia (CMML), and low-blast count acute myeloid leukemia (LB-AML), previously untreated with HMA who were enrolled in the Pevonedistat-2001 (P-2001) Phase 2 study of azacitidine (AZA) with or without pevonedistat (PEV).

Methods: Targeted DNAm was quantified using bisulfite padlock probes (BSPP) at ~141,000 unique regions known to contain differentially methylated CpG sites. BSPP sequencing was performed on 130 genetically and clinically annotated bone marrow mononuclear cell DNA samples collected at screening and Cycle 2 Day 22±3 (C2D22). Data from 15 samples were removed due to low CpG coverage resulting in 115 samples with >10X coverage of 322,387 CpGs each. There were 27 patients with paired samples, 30 with screening only, and 31 with C2D22 only (Table 1, Figure 1A). Responses for HR-MDS and CMML were categorized according to the IWG-2006 modified criteria and for LB-AML according to the IWG-2003 criteria. Differentially methylated CpGs were identified using the R package ‘DSS’ v2.35.0. Non-negative matrix factorization-based unsupervised clustering was performed using the Onco-GPS method within the Python ‘ccal’ package. Statistical analyses were carried out using R version 3.6.2.

Results: Differential DNAm analysis between screening and C2D22 for the 27 paired samples shows global demethylation after treatment in nearly all cases but is more pronounced in responders (mean change in global DNAm: response = -5.5%; non-response = -2.0%; t-test p < 0.001). There was no significant difference in demethylation between AZA and AZA+PEV treated groups (AZA: -5.3%; AZA+PEV: -4.1%; t-test p = 0.32). Patients who attained a complete response (CR) in the AZA+PEV arm tended to have more demethylated CpGs than those with a CR in the AZA arm (Figure 1B. Mean number of demethylated CpGs in complete responders: AZA = 16,459; AZA+PEV = 24,731; t-test p = 0.396). In general, responding patients strictly defined by CR or partial response had steeper declines in mean DNAm levels (Figure 1C) than patients with other types of responses, but did not show an association between demethylation and time to response (TTR). Unsupervised clustering of the top 3% most variably methylated CpGs using Onco-GPS did not identify clusters associated with response at screening, but did resolve a cluster highly enriched for responders assessed at C2D22 (Figure 1D. Cluster B, Fisher’s exact test p = 0.011; odds-ratio 95% CI = 1.52–Inf). Analysis of the CpG sites that define Cluster B and creation of a formalized statistical predictor of response based on DNAm patterns is ongoing. 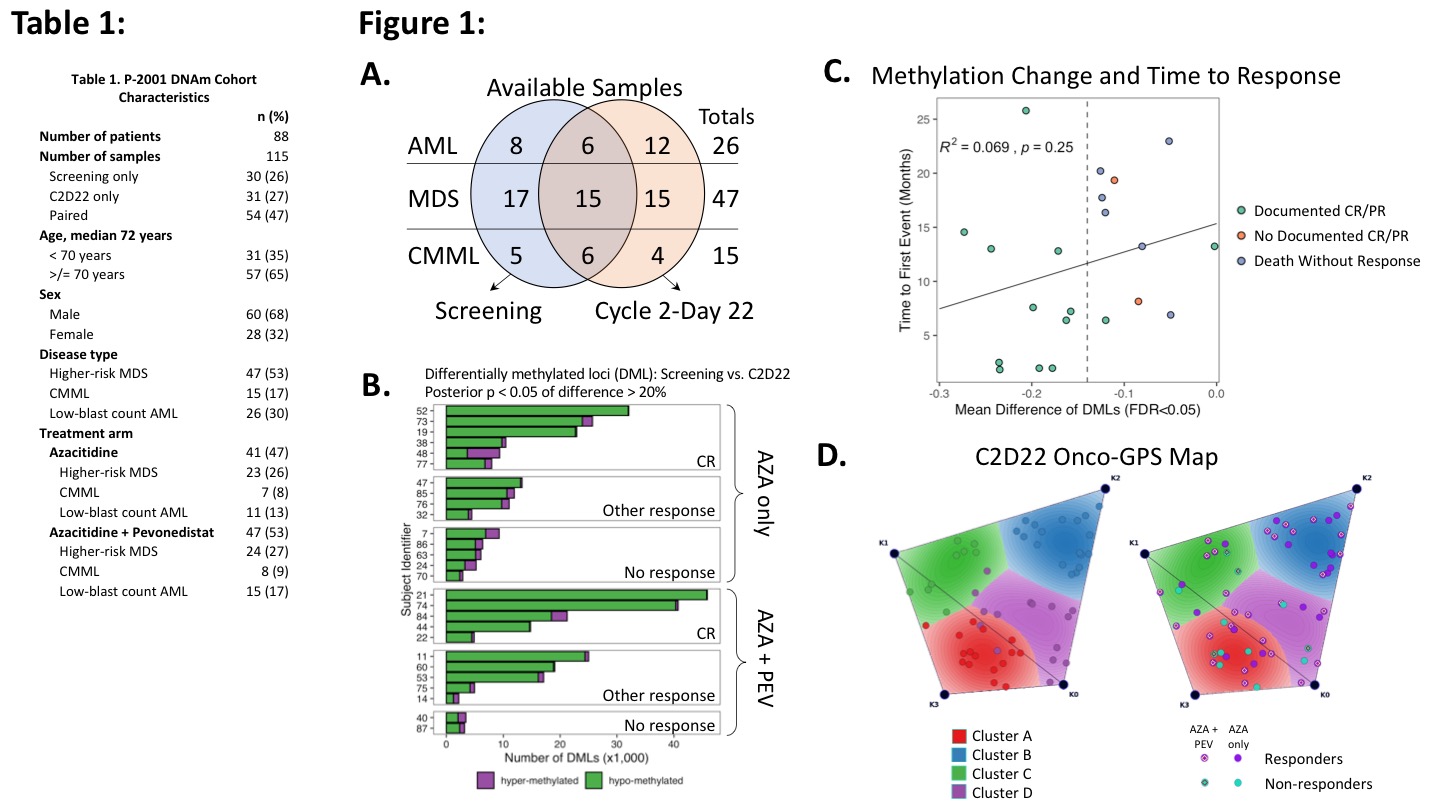