2577 Implication of Piga Genotype on Clinical Features of PNH

Somatic mutations of X-chromosomal PIGA gene in hematopoietic stem cells are the key molecular events in the pathogenesis of PNH. PIGA mutations lead to impaired biosynthesis of glycosylphosphoinositol (GPI)-anchor. Resultant lack of GPI-anchored proteins (GPI-AP) leads to a clonal expansion of PNH clone and increased sensitivity of PNH red cells (RBCs) to complement-mediated hemolysis. Based on immunofluorescent staining, the severity of GPI-APs deficiency on the RBCs can be distinguished in: PNH type-1 (TI) with a normal expression; PNH type-2 (TII) with a partial reduction; and PNH type-3 (TIII) PNH with a total absence of CD55 and CD59.1 Fractions of these RBC types are believed to be a result of the molecular spectrum of PIGA mutations ranging from missense in various amino acids positions to truncations and locus deletions, which can be concurrent in some patients. Consequently, the presence of TII and TIII cells indicates the overall severity of PIGA defect and thus individual phenotypic subtypes can be defined as predominantly TII or TIII according to the dominant clonal defect. We hypothesize that PIGA genotype may shape PNH phenotype trajectory with regard to the severity of GPI-AP deficiency and clinical course. For instance, incomplete TII RBCs PNH phenotype should result in slower expansion due to incomplete selection advantage as compared to complete loss of PIGA function indicted by TIII RBCs, typical of hemolytic PNH. However, the process of “GPI-AP painting”, a passive transfer from normal to TIII RBC could result in the presence of pseudo TII RBCs with intermittent phenotype. Here, using deep targeted sequencing, we correlated PNH flow cytometric phenotype with the type of PIGA mutations. For improved resolution, our study focused on patients with large clones and hemolytic PNH.

Among 295 diagnosed patients who had a PNH clone (>0.5% of PNH granulocytes), we identified 60 (median age 37 years, range 5-84) who fulfilled the criteria for hemolytic PNH (PNH clone size >20% and LDH>x2.5 ULN), tested before complement blocker therapy. Whole blood DNA was subjected to multi-amplicon deep NGS using primers covering all exons of PIGA gene.2 Accordingly, 13/60 (21%) were classified as having TII and 47/60 (79%) TIII PNH. Overall, median granulocyte clone size was 71.5% (21.5-99) with no differences between TII/TIII subtypes (p=0.872) as well as it was for baseline characteristics such as sex ratio, blood counts and previous history of aplastic anemia.

A total of 137 PIGA mutations were found, 27 in TII and 110 in TIII dominant patients. (Fig.1A-B) Overall, >1 and >2 mutations (clonal mosaicism) were found in 85% and 57% of patients, respectively. In cases negative by NGS of PIGA gene (9/60, 89% TIII PNH), no mutations were found even after sorting to purity of GPI(+) cells. Frameshift (39%, n=54) and missense (30%, n=41) mutations were most common, followed by splice site (16%, n=22), non-sense (11%, n=15) and non frameshift insertion/deletion (4%, n=5). Although PIGA mutations are spread throughout the entire coding region, TIII patients harbouring non-frameshift hits had more often truncating mutations mapping within the first 200bps across the PIGA domain. We demonstrated that missense PIGA hits were enriched in TII PNH, while frameshift deletions in TIII dominant patients (p=.0021 and .0201, respectively- Fig.1C). Moreover, when only dominant clone was analyzed, missense and frameshift mutations were strong predictors of PNH RBC phenotype, defining TII RBC (p=.0002) and TIII RBC patients (p=.02), respectively. (Fig.1D-E) When patients harbouring 1 unique somatic hit were studied (16/60, 27%), missense mutations accounted only for 19% of cases. Indeed, in an internal cohort of 89 AA patients with small PNH granulocytes clones (<20%) missense mutations accounted for 43% of cases indicating incomplete immune privilege.

PIGA missense and truncating mutations dictate the susceptibility of PNH RBCs to complement. We show that while missense mutations may still lead to a deficient but not totally absent GPI-AP synthesis, truncating mutations seem to be responsible for an entirely disruptive phenotype, causing the complete absence of GPI-APs on RBC membrane surface. Sequencing of other genes in the GPI synthetic pathway (AbstractID# 139335) may help to identify other somatic hits explaining PNH phenotype of cases lacking PIGA. 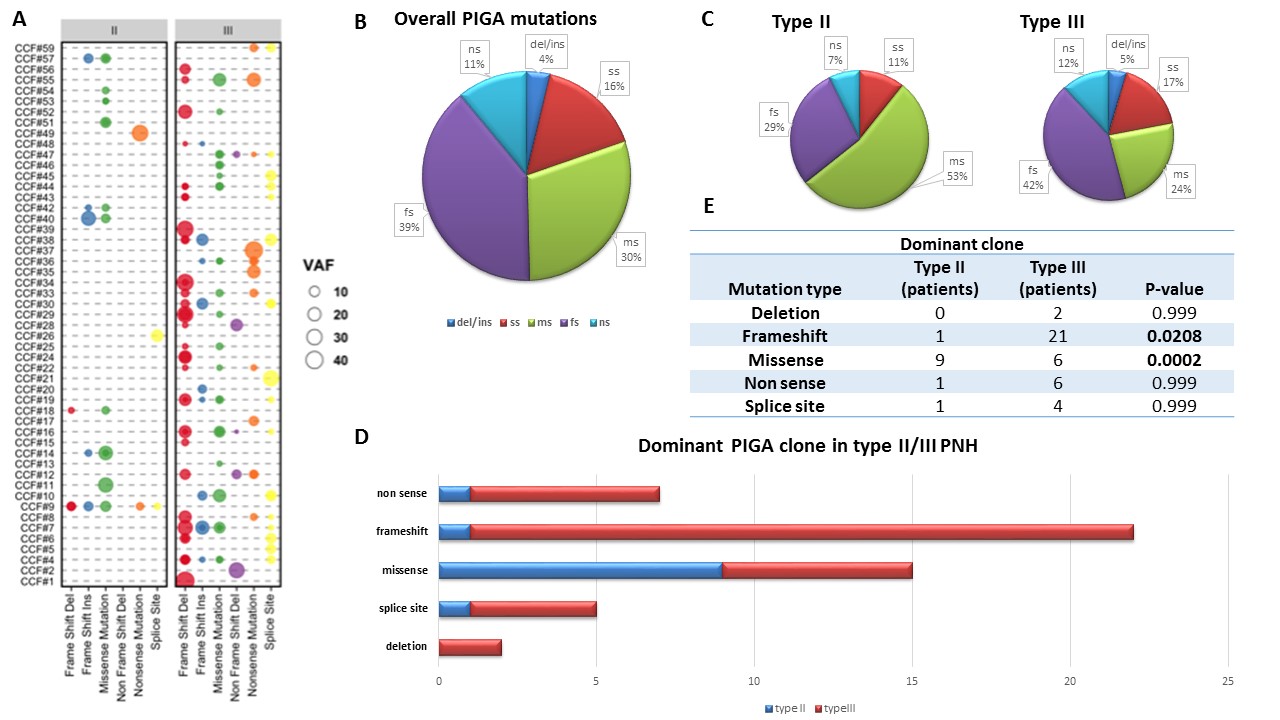