Methods: CD59- and CD59+ granulocytes and monocytes cells were sorted by FCM and analyzed by RNA sequencing in 5 PNH patients. We focus on the proliferation relative pathway-NF-κB pathway. The mRNAs which FPKM>10 and over 3 patients were chosen to search out the upstream regulation LncRNAs. Then the expression of LncRNAs were detected by qRT-PCR in 30 PNH patients. The highly expressed LncRNA FAM157C was screened out, and analyzed the correlation with clinical index. Finally, we knock-down FAM157C gene in the PIGA knocked out THP-1 cells by lentivirus transfection technique, and observe the cell proliferation, apoptosis to verify its function.

Results: Transcription analysis revealed that 742 upregulation LncRNAs and 3276 upregulation mRNAs were identified in CD59- cells (Figure A). The highly expressed NF-κB pathway (Figure B) mRNAs were analysed by co-expression, after that MALAT1, LINC01002, FAM157C, CTD-2530H12.2, XLOC-064331 and XLOC-106677 were concerned with the 8 mRNAs (Figure C). The results showed that the levels of MALAT1 and FAM157C in CD59- cells expression were significantly higher than that of the CD59+ cell in 30 PNH patients (p<0.05). The expression level of MALAT1 and FAM157C were positive correlation with LDH level and CD59- granulated and monocytes cells ratio (Figure D).

Conclusion: High expressed FAM157C was associated with hemolysis index in PNH, and knock-down it can decrease proliferation ability, induce the apoptosis and the cells were blocked in G0/G1 phase and S phase, indicating FAM157C may be involved in the proliferation of PNH clones.

Figure B: Scatter plot is a graphical representation of KEGG enrichment analysis results.

Figure C: Screening of mRNAs and LncRNAs from NF-κB pathway. 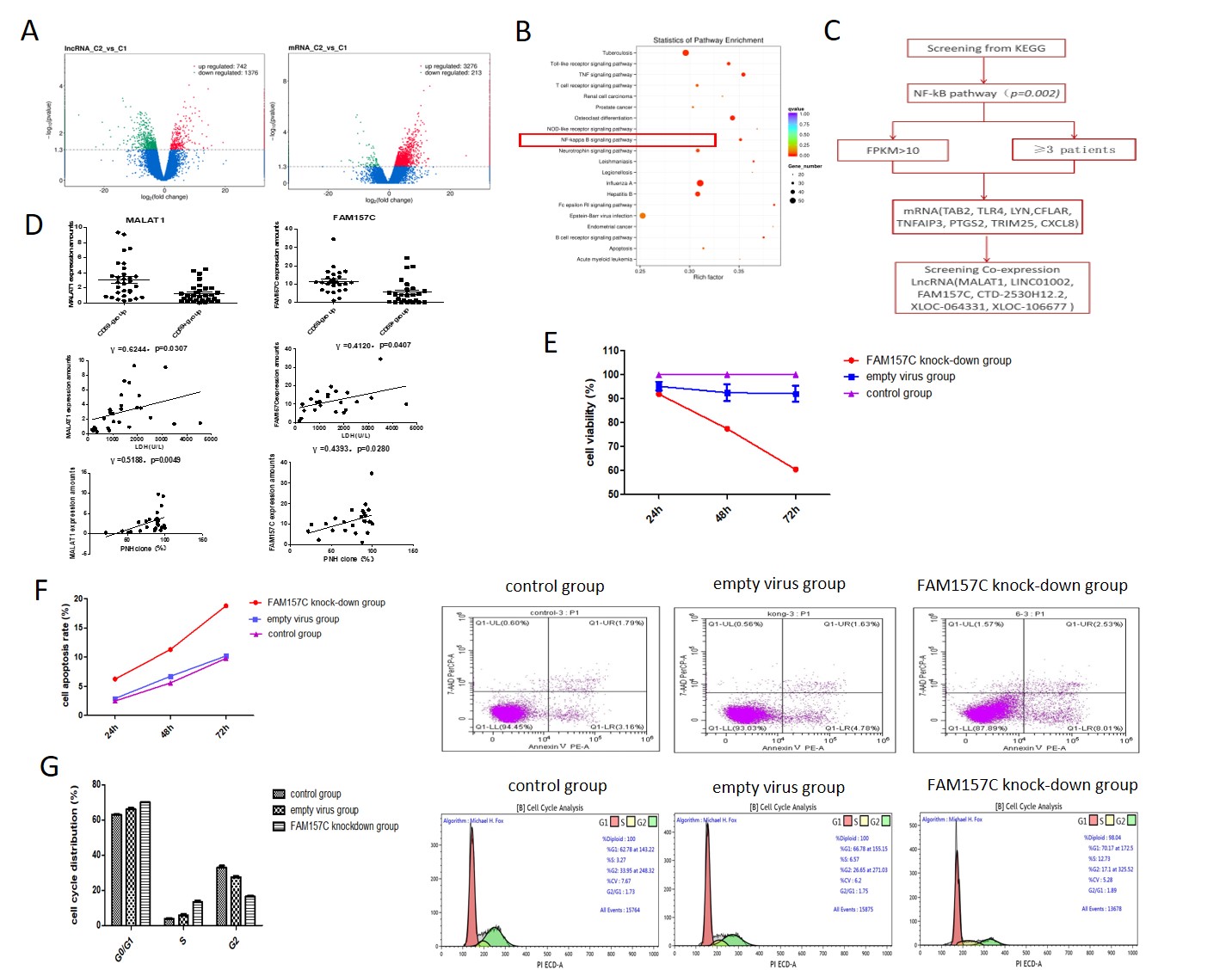