Studies combining Daratumumab with a proteasome inhibitor and/ or an immunomodulatory drug have shown to increase the duration and depth of response in patients with newly diagnosed multiple myeloma (NDMM). While assessment of minimal residual status (MRD) after different stages of treatment is increasingly being evaluated in clinical trials as sensitive measure of depth of response and improved survival, published data on its utility as a tool to select the optimal post-induction therapy are not yet available.

After induction, all subjects will undergo disease evaluation. Those who experience ≥very good partial response (VGPR) will undergo an assessment of MRD and will be classified as MRD(+) or MRD(-) as determined by next generation sequencing at 10-5 sensitivity (clonoSEQ®, Adaptive Biotechnologies), with further therapy guided by MRD-based algorithm (Figure). Those with <VGPR will be considered to have MRD(+) disease and will follow MRD(+) algorithm. This trial will allow us to gather preliminary data on use of MRD status to direct post-induction therapy. Based on MRD status post-induction, patients will be divided into 3 separate groups: Group A: MRD(-) will be offered lenalidomide maintenance or no further treatment at the discretion of the investigator; Group B: MRD(+) eligible for transplant, will undergo autologous stem cell transplant (ASCT). Post ASCT, those who remain MRD(+) will receive up to 12 cycles of KRd; Group C: MRD(+) group, not eligible for transplant will receive up to 12 additional cycles of KRd.

A minimax 2-stage design will be used to test the hypothesis that the CR or better rate is ≤ 50%. Twenty-three subjects will be enrolled in the first stage, and if at least 12 of the 23 subjects have a CR or better after induction therapy, an additional 16 subjects will be enrolled (a total of 39 patients). If at least 24 of 39 subjects have a CR or better, the null hypothesis will be rejected. Based on a one-sided alpha = 0.10 significance level, this sample size will provide 90% power to reject the null hypothesis, assuming the true CR or better rate is 70%. Bayesian based stopping rules (Grade 3+ cardiovascular/pulmonary-related toxicities or any Grade 5 events) were developed that will be utilized for safety monitoring during induction phase of the study.

Beyond the direct anti-MM plasma cell activity, the Dara + KRd combination has a potent effect on immune effector cells and overall inflammation. Correlative aims include assessing blood and bone marrow immune biomarkers at baseline and during treatment for association with patient outcome. Mononuclear cells, isolated from peripheral blood samples and bone marrow aspirate will be obtained for NK, NKT, B and T cell immunotyping (including expression of activating/ inhibitory molecules and maturation status), T cell (αβ and γδ) clonotyping and chemokine-profiling. Additionally, MRD testing will be done by next generation flow cytometry (MRD-NGF) at 10-6 sensitivity.

The study is actively recruiting at Levine Cancer Institute, Charlotte. At the time of submission, 8 subjects have enrolled and are in induction phase of treatment. 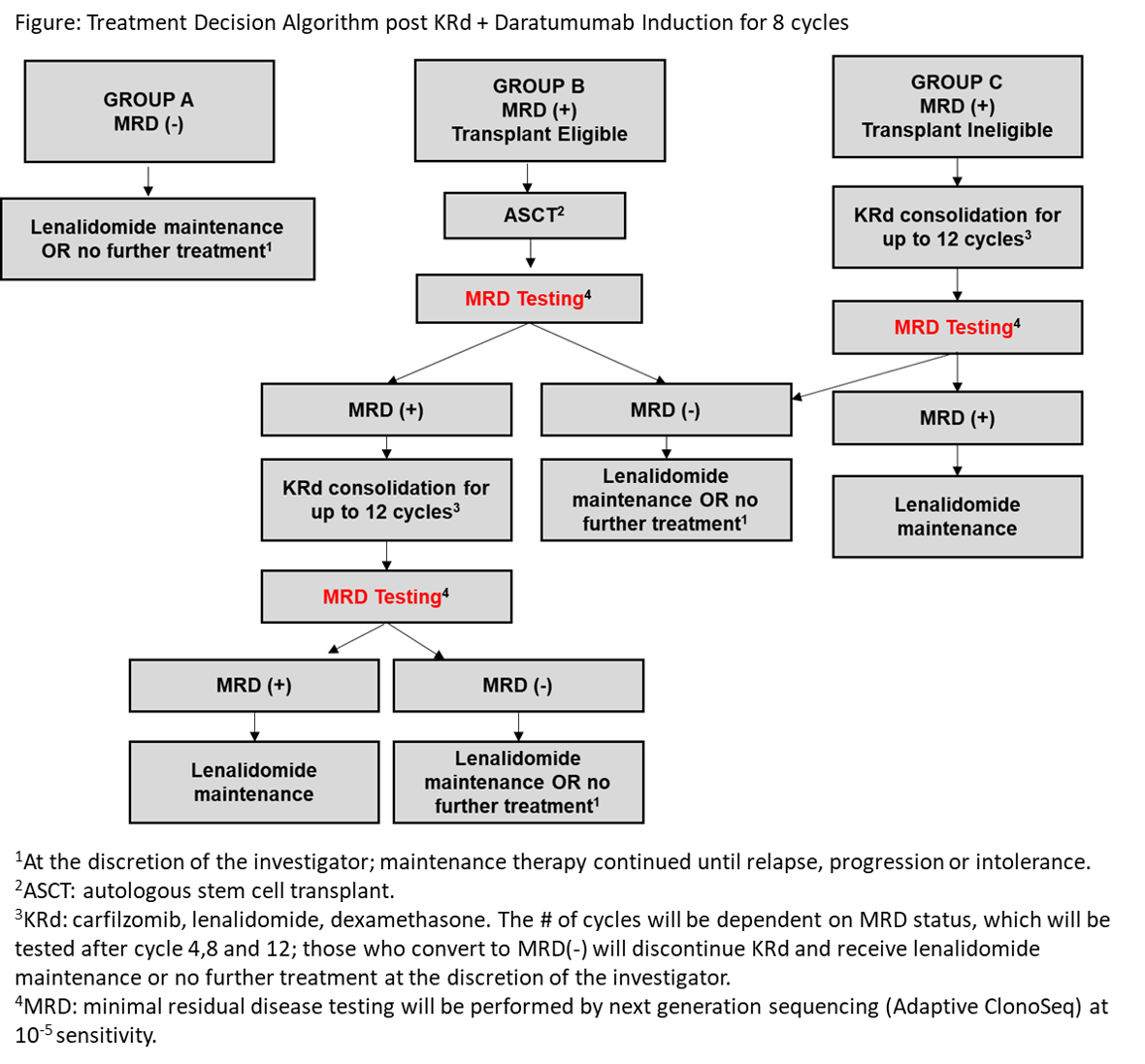