Background: Daratumumab-refractory multiple myeloma (MM) patients have limited treatment options and a dire prognosis. Daratumumab (Dara) targets the overexpressed myeloma antigen CD38, and its mechanism of resistance has been partially associated with downregulation of CD38 expression (Nijhof et al. Blood, 2016). Dara is a key agent in the relapsed setting and is being integrated into upfront treatment. In addition, isatuximab (Isa) has become the second FDA-approved anti-CD38 monoclonal antibody (mAb). Thus, when and how patients can be retreated with this important drug-class has become a critical question. We developed a platform for measuring drug efficacy ex vivo, including mAbs, termed Myeloma Drug Sensitivity Testing (My-DST) (Walker et al. Blood Advances, 2020). Here, we addressed whether My-DST could determine if retreatment with the anti-CD38 mAbs Dara and Isa can be effective in patients that had previously developed Dara-resistance.

Methods: Bone marrow aspirates were obtained from the hematologic tissue bank (HTB) from patients at the University of Colorado Blood Cancer Program after informed consent and IRB approval. Mononuclear cells (MNCs) were isolated by Ficoll density gradient centrifugation, cells incubated for 48 h with 20 nM Dara, Isa and untreated controls in triplicate wells. Flow cytometry was performed on a BD FACSCelesta. To identify the viable MM population, samples were stained with fluorophore-conjugated mAbs to CD38, CD138, CD45, CD19, CD56 and CD46. Stained samples were washed and resuspended in Live/Dead dye Near-IR. Results were analyzed through FlowJo and Graphpad Prism software.

Results: My-DST for Dara (20 nM) cytotoxicity has been performed in 67 patients, 52 of which were Dara-naïve and 15 of which were clinically Dara-refractory. Of Dara-naïve patients, 38/52 (73%) showed >20% reduction in viable MM cells whereas only 3/15 (20%) of the Dara-refractory patients showed >20% decrease (Fig 1A). Provocatively, the patients that showed potential “re-sensitization” had been off Dara for >12 months, and there was a significant correlation between response to Dara and months off treatment (r= -0.5096, p= 0.0457, Fig 1B). Furthermore, we evaluated two timepoints in one of the responders (HTB1749), and the later sample (HTB1749.3) showed a deeper response, further supporting the correlation. Surprisingly, in Dara-refractory patients the median CD38 expression was not significantly different between the three ex vivo responders and those who did not respond (p = 0.439, Fig 1C). Isa was tested in seven of the Dara-refractory patient samples, showing >20% decrease in viable MM cells in five, of which three did not respond ex vivo to Dara (Fig 1D). Interestingly, the Isa responders were only off Dara treatment for an average of 7.5 months. We further investigated HTB1059.3 and HTB1749.2, which responded to Dara, and found that these patients had multiple distinct MM cell subpopulations with different levels of CD38 expression, with the subpopulation with higher CD38 MFI accounting for the decreased viability (Fig 1E-F). When we compared HTB1059.3 with a prior sample available, these differential populations were not present before Dara treatment (data not shown), indicating these subpopulations evolved after treatment. Likewise, the same phenomenon of subpopulations with differential CD38 expression was observed in the Dara-refractory patients who responded to Isa (Fig 1G-H).

Conclusion: These data support the possibility of retreatment with anti-CD38 mAbs in patients who once became refractory to Dara. Although our findings need to be confirmed with additional samples, they suggest that Isa may have efficacy earlier in this setting, supporting an approach to switch agents when retreating with this drug class. Anti-CD38 mAb sensitivity in the Dara-refractory population appears to be heavily influenced by the different CD38 expression levels on the heterogeneous MM cell subpopulations that emerge when a patient is off Dara for a period of time. Furthermore, My-DST with anti-CD38 mAbs may be applied to help guide the treatment approach in this population. Still, the presence of CD38-low subpopulations in these patients may represent resistant cells that shorten the remission times on retreatment. Thus, the combination drug partner choice will likely be critical to successfully optimizing depth and duration of response in Dara-refractory patients. 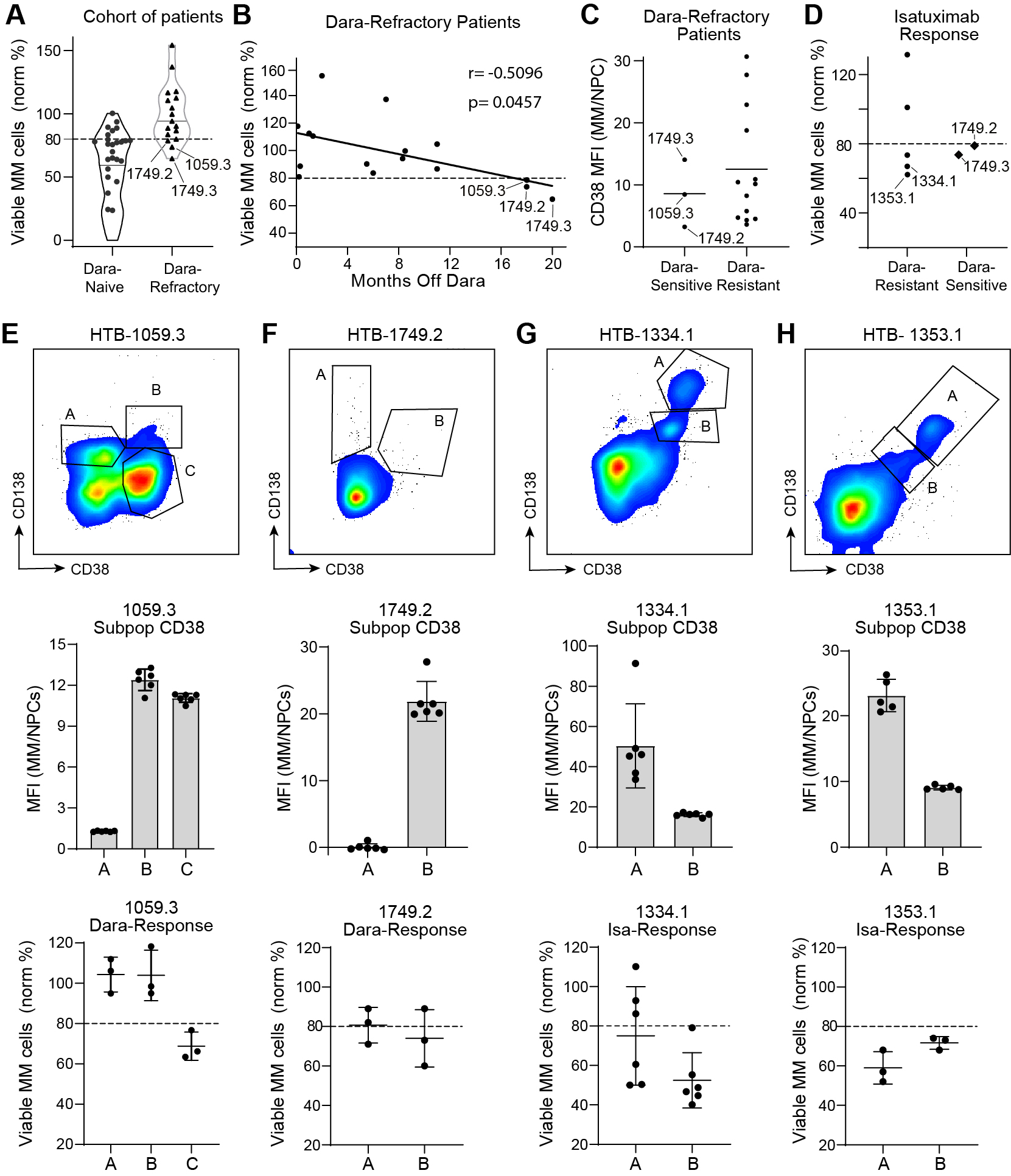