Results: As of July 6, 2020, 67 pts were enrolled, which included 45 pts (67%) with diffuse large B-cell lymphoma (DLBCL), 12 (18%) with follicular lymphoma (FL) and 4 (6%) with MCL. Pts were heavily pretreated, with a median (range) of 3.0 (1–6) prior lines of therapy for pts with DLBCL and 4.5 (1–18) for pts with FL; in total 6 pts had received prior CAR-T therapy. Over one-half of pts (37/67; 55%) were refractory to their most recent systemic therapy; 35/67 (52%) were refractory to their most recent anti-CD20 mAb therapy. At a median overall follow-up of 8.3 months, treatment is ongoing in 25 pts (37%); median follow-up is 8.3 months for pts with DLBCL and 8.8 months for pts with FL. Epcoritamab was well tolerated and there were no discontinuations due to treatment-related adverse events (AEs). The most common treatment-emergent AEs (TEAEs) were pyrexia (70%), local injection-site reactions (48%), and fatigue (45%). With increased doses, TEAEs of special interest were consistent with previous reports: CRS events were all grade 1/2 (58%) with no grade 3/4 CRS events, and limited neurotoxicity was observed (6%; grade 1: 3%; grade 3: 3%; all transient). There were no dose-limiting toxicities or febrile neutropenia events, and no deaths due to treatment-related AEs. Antitumor activity in evaluable pts with DLBCL and FL is shown in the Table. In 18 pts with DLBCL receiving epcoritamab ≥12 mg, overall response rate (ORR) was 66.7% with 6 pts achieving a complete response (CR). Of the 7 pts who received epcoritamab ≥48 mg (48-mg RP2D n=4; 60-mg n=3), all achieved a response, including CR in 2 pts (28.6%) with limited follow-up. All pts with DLBCL who were previously treated with CAR-T therapy achieved a response (4/4: 2 CR, 2 partial response [PR]). ORR was 100% for the 8 pts with FL receiving epcoritamab ≥0.76 mg, with 2 pts achieving a CR (PET scans were not mandatory and disease assessment by PET was not available in 4/6 pts who achieved a PR). Of the 4 pts with MCL, responses have been observed in 2 pts with blastoid variant MCL (1 CR; 1 PR). Data on duration of response are not yet mature. Longer follow-up data, including additional response evaluations at 48-mg dose and in pts with MCL, will be presented.

Conclusions: Epcoritamab, a novel SC bsAb, demonstrates a consistent and favorable safety profile, with no grade ≥3 CRS events and limited neurotoxicity, in support of outpatient administration. Emerging data with longer follow-up are highly encouraging, with substantial single-agent efficacy, including CR in heavily pretreated pts with FL, MCL, and DLBCL. 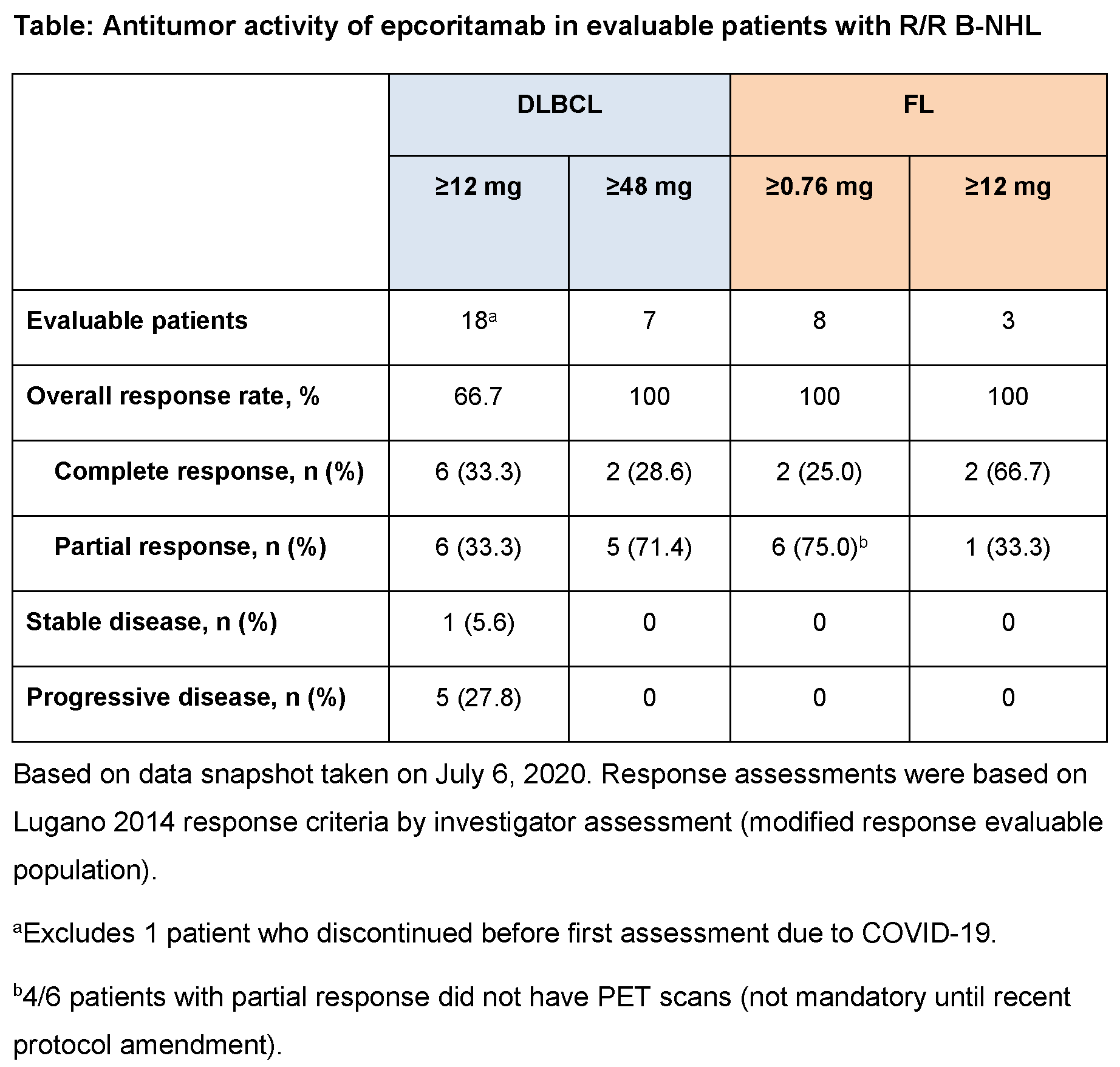