Methods The National Health Insurance Service (NHIS) database is a population-based cohort covering over 95% of the population across all regions of South Korea. We used the patient-level longitudinal NHIS database which included patients who first received a cancer code ([ICD 10: C]) under the age of 20 years from 2002-2017. The onset of cancer diagnosis was defined as the time of the earliest diagnosis in patients who were prescribed any treatment excluding surgery within one month after the initial diagnosis. Claims codes for chemotherapeutic agents, radiotherapy, and transplantation were designated and analyzed in the database. For trajectory analysis, the total numbers of claimed diagnostic codes per year were used as the input variable of the group-based trajectory method. The separate trajectories were identified using the Proc Traj procedure in SAS 9.4.

To identify characteristics associated with survival differences between trajectory groups, baseline characteristics at diagnosis and treatments were analyzed (Table 2, 3). There were significant differences in age at time of diagnosis in three trajectory groups: in both cohorts, age at diagnosis was significantly younger in Group 3 of the lowest survival rates than other groups. For initial diagnosis, there were increasing trends of Lymphoid leukemia and brain tumors in Group 3 of both cohorts. For types of treatment, the proportions of patients who received only chemotherapy or radiotherapy decreased from Group 1 to Group 3. However, the proportions of patients who received combined treatment with any stem cell transplantation increased from Group 1 to Group 3. The follow-up periods were significantly lower in Group 3, which corresponded to the survival probabilities. Whereas the numbers of prescribed codes for any treatment were significantly higher in Group 3, indicating that patients in Group 3 received more frequent and condensed treatments within shorter periods than those in Group 2, and this relationship was also seen between Group 2 and Group 1.

Conclusions This study is the first trajectory analysis conducted in childhood cancer survivors using population-based longitudinal data. In this study, unlike previous trajectory analyses based on characteristics at the time of diagnosis, trajectories were classified based on the burden of diagnosis during periods, which resulted in differences in long-term mortality, and then the differences in characteristics between each group were analyzed. Our findings indicate that that long-term mortality is related to age at diagnosis and concentration of treatment relative to total follow-up duration rather than the absolute duration or intensity of treatment. 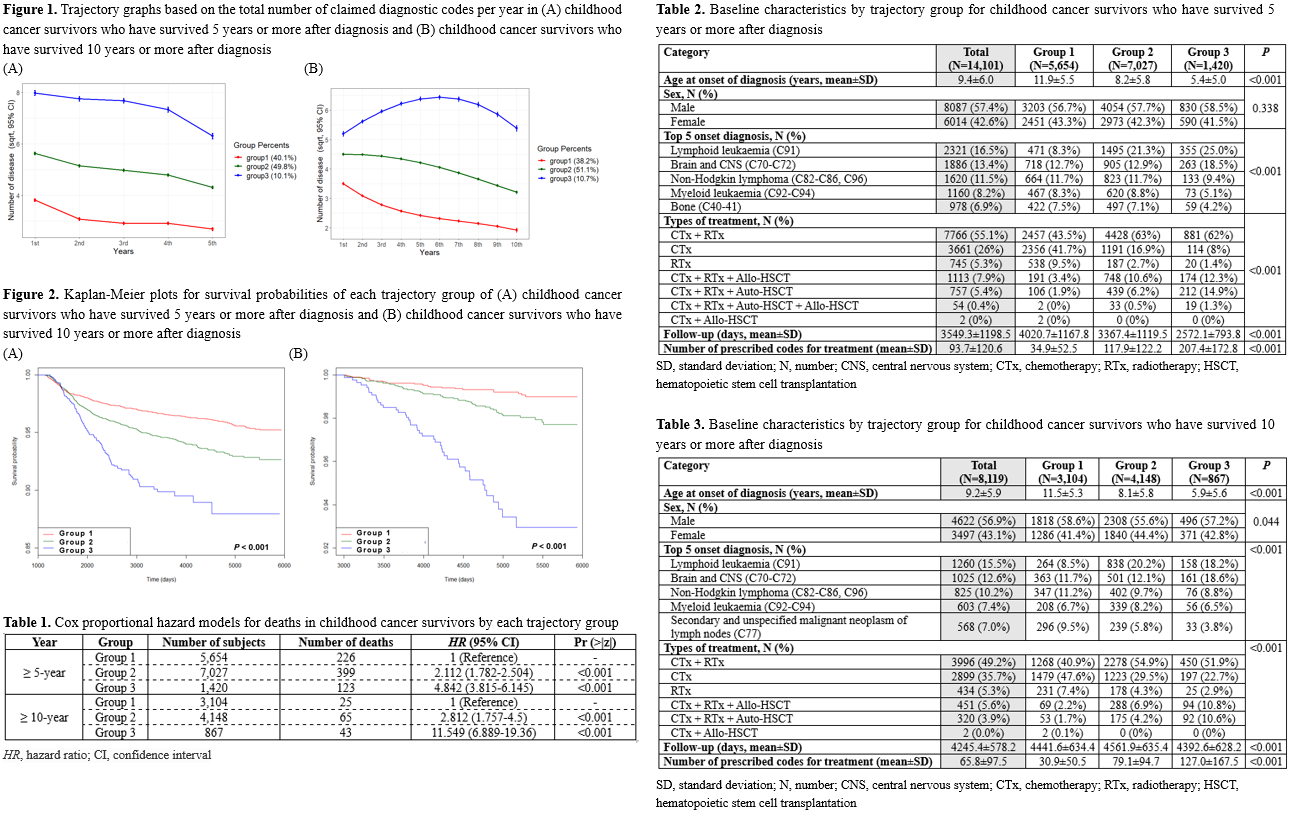