Methods: Individual patient-level data (IPD) with a median follow-up of 13.3 months were available for KarMMa (data cutoff January 14, 2020) while study-level data were available for MAMMOTH. Unanchored matching-adjusted indirect comparisons (MAICs) were conducted to compare efficacy outcomes from the 2 studies. These analyses were performed on data from 128 patients who received ide-cel (target dose 150, 300, or 450 × 106 CAR+ T cells) in KarMMa, and 249 patients who received CC therapies after progression on an anti-CD38 antibody in MAMMOTH. IPD from MAMMOTH were reconstructed based on published Kaplan–Meier curves for time-to-event outcomes. The most relevant differences in patient characteristics between the studies were identified for adjustment based on published literature and clinical expertise. These included the number of prior lines of treatment, proportion of patients refractory to specific prior treatments, and time since diagnosis. Propensity score models were used to weight the treated population from KarMMa to match the baseline characteristics of treated patients in MAMMOTH in order to predict outcomes for ide-cel in a population corresponding to those evaluated in MAMMOTH. The effective sample size (ESS) was calculated as a measure of the amount of overlap between the study populations included in the MAIC. Odds ratios (ORs) were calculated for ORR using weighted logistic regression models. Hazard ratios (HRs) were calculated for PFS and OS using weighted Cox proportional hazards models.

Results: Ide-cel was associated with a significantly higher ORR compared with CC in a population matched to the treated MAMMOTH population (OR 5.11, 95% confidence interval [CI] 2.92–8.94, P < 0.001) (Table 1). Similarly, ide-cel significantly extended PFS (HR 0.55, 95% CI 0.42–0.73, P < 0.001) and OS (HR 0.36, 95% CI 0.24–0.54, P < 0.001) versus CC. Results were generally consistent for patients in the ITT population and those who received the target dose of 450 × 106 CAR+ T cells who experienced efficacy gains exceeding those receiving lower target doses. In MAMMOTH, the individual CC regimens involving targeted therapies (carfilzomib, daratumumab, and elotuzumab) were associated with a median OS of between 8.3 and 12.7 months. The weighted median OS times for ide-cel are consistently longer than those associated with the individual CC regimens in MAMMOTH (Table 2), similar to the results for the overall treated population. Limitations of this inter-study comparison include a tighter window of OS evaluation in the ide-cel arm, which may have underestimated the true difference. More broadly, there is also a risk of bias given limited reporting on potential confounders. 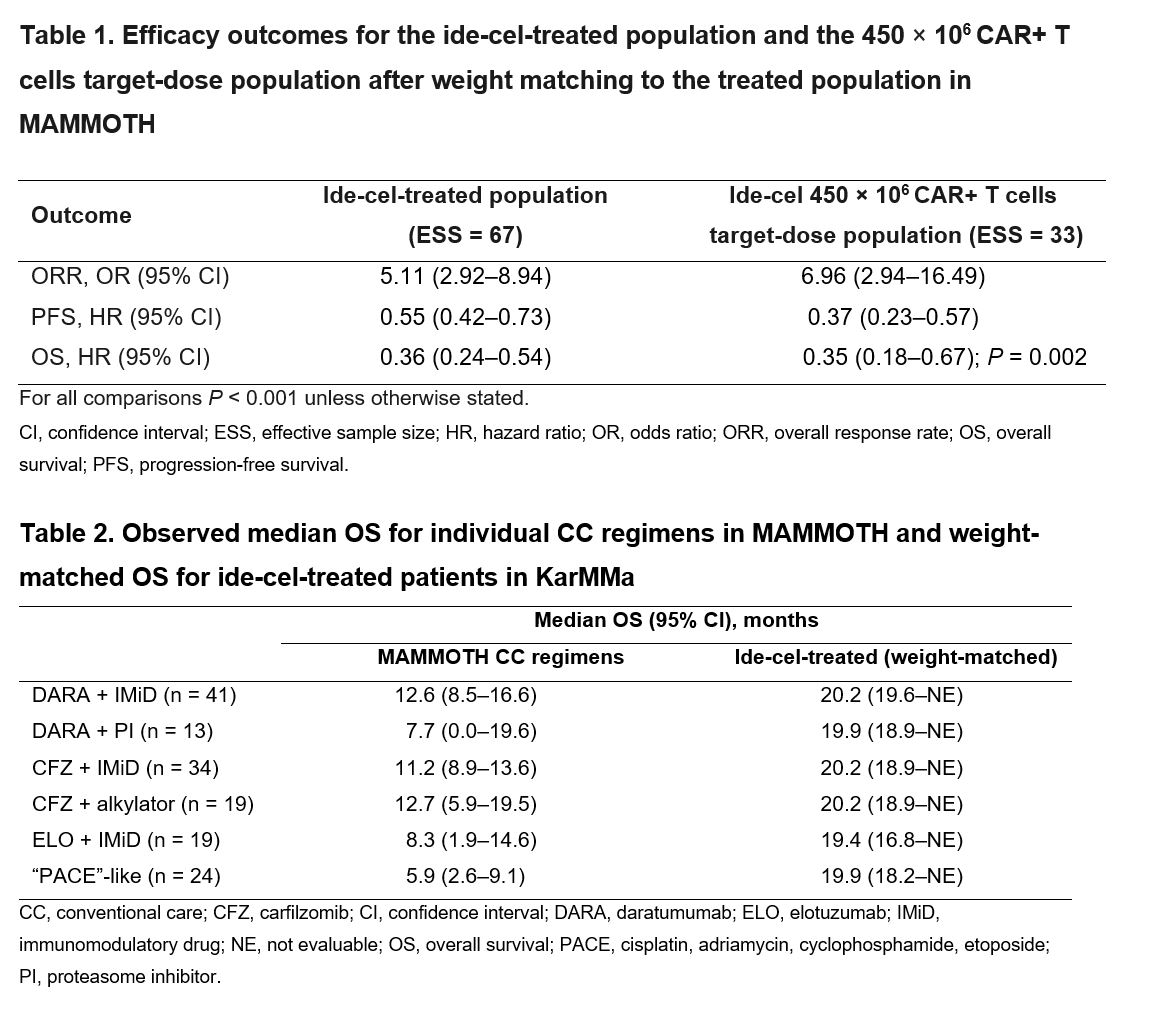