369 Evidence of Educational Bias in Cognitive Screening of Adults with Sickle Cell Disease: Comparison of Available Tools and Possible Strategies for Mitigation

Background: Cognitive impairment is a dreaded complication of sickle cell disease (SCD) that impacts quality of life, school performance and employment. In 2020, the American Society of Hematology issued a strong recommendation that clinicians supervising the care of adults with SCD conduct surveillance for cognitive impairment using simplified signaling questions (DeBaun, 2020). However, guidance on the optimal screening strategy is lacking and several available tools are biased by language and education. The Rowland Universal Dementia Assessment Scale (RUDAS) was specifically designed for cognitive screening in multicultural populations (Storey, 2004). In the general elderly population, RUDAS is less biased by education than the Montreal Cognitive Assessment (MoCA) (Naqvi, 2015).

Hypothesis: In adults with SCD, performance on the RUDAS is less influenced by educational attainment when compared to the MoCA. Our primary aim was to estimate the prevalence of suspected cognitive impairment using RUDAS and MoCA in adult SCD patients. The secondary aims were to examine for the presence of educational bias and to develop mitigation strategies in case of such a bias.

Results: Among the first 45 consecutive adult SCD patients undergoing routine cognitive screening, the median age was 39 (range 19-67). RUDAS and MoCA scores suggestive of mild cognitive impairment were found in 33/45 (73.3%) and 29/45 (64.4%) participants, respectively. There was a strong correlation between both tests (r=0.48, p=0.001). Both RUDAS and MoCA scores increased significantly with increasing level of education (r=0.36, p=0.015 and r=0.39, p=0.007, respectively), but were not significantly influenced by the HADS score. RUDAS and MoCA test items most biased by education were visuoconstructional tasks. Tasks assessing executive functioning and language were also biased in MoCA. Substituting the 3D visuospatial task of the RUDAS by a 2D task reduced the educational bias (r=0.20, p=0.045). Adding 1 point for highest level of education £ 12 years after kindergarten did significantly mitigate the effect of education on the RUDAS but only partially for the MoCA (r=0.23, p=0.131 and r=0.30, p=0.047).

Conclusions: Overall, these results suggest there is an educational bias in the neurocognitive screening of adult SCD patients using available tools such as the RUDAS and MoCA. Although RUDAS was less biased overall, visuospatial assessment remained biased. The task often considered more “culture-fair” is still subject to the impact of educational potential (Statucka, 2019). We provide different strategies to mitigate education bias when assessing with RUDAS. Thus, the RUDAS adjusted by the educational level allows to systematically identify SCD patients in need of comprehensive neurocognitive testing. Prospective validation is ongoing. 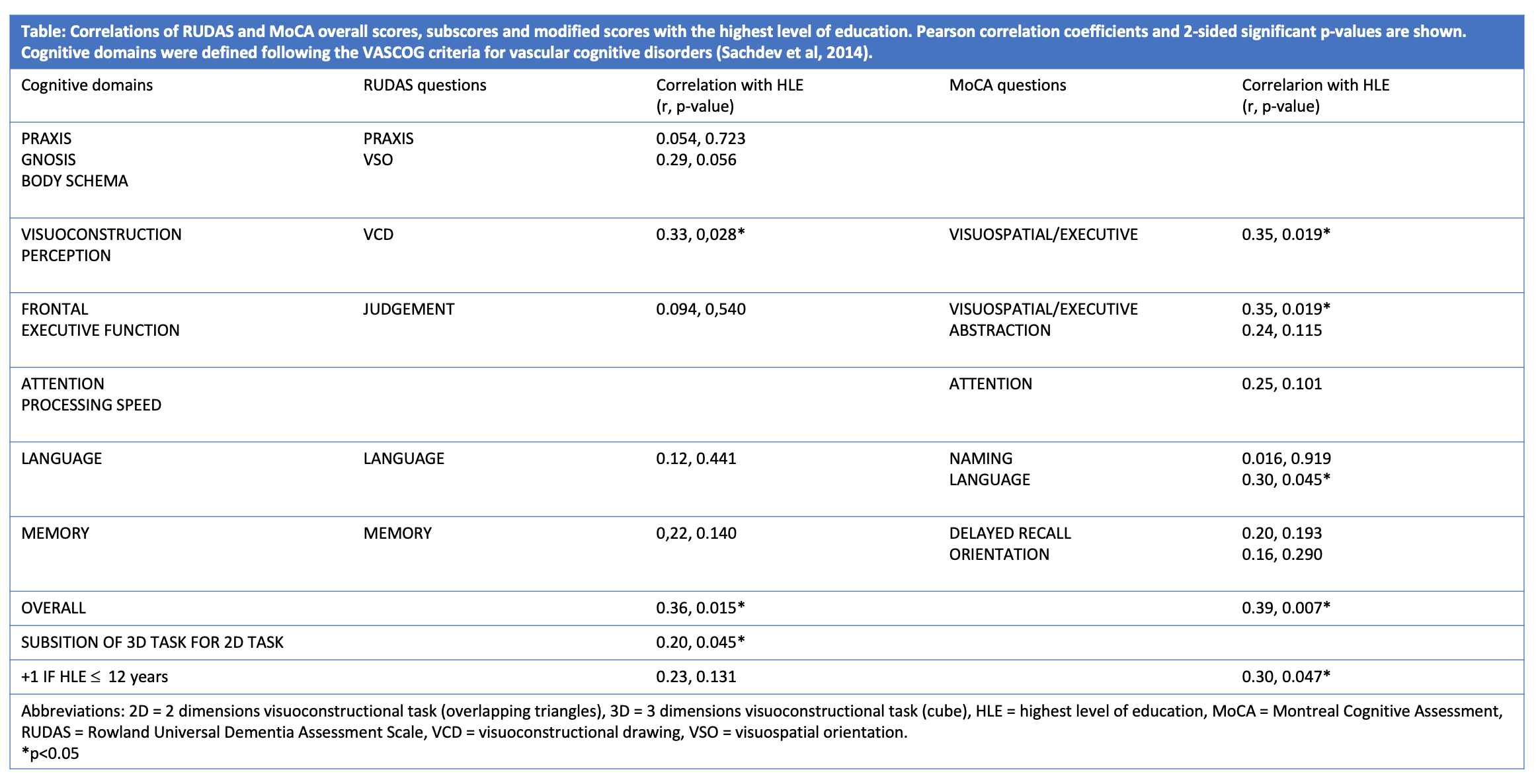