Introduction: Terminal complement inhibition with a C5 inhibitor (eculizumab or ravulizumab) is the standard of care for treatment of atypical hemolytic uremic syndrome (aHUS) and leads to rapid resolution of thrombotic microangiopathy and improvement in renal function. The ideal duration of complement inhibition in aHUS is not established. Indefinite therapy is standard, though recent studies suggest that many patients with aHUS may safely discontinue therapy. Here, we present the outcomes of a physician-directed eculizumab discontinuation and monitoring protocol in a prospective cohort of 32 patients with aHUS.

Methods: Consecutive patients with aHUS enrolled in the Hopkins Complement Associated Disease Registry between January 2014 and December 2019 who initiated eculizumab therapy during an acute episode of aHUS were included in the study. Patients starting eculizumab in the setting of renal transplant were excluded from the analysis. Physician directed discontinuation and monitoring was done according to the protocol outlined in Figure 1. We also evaluated relapse rate and renal outcomes and examined clinical and genetic risk factors for relapse.

Results: Thirty-two consecutive patients who initiated eculizumab therapy for acute aHUS. Median age at initial diagnosis of aHUS was 44 (IQR 25, 53.5) years, 78.1% were female, and complement gene variants were present in 59.0% (13 of 22 patients with sequencing data available). Of these 32 patients, 25 (78%) discontinued eculizumab therapy after a median duration on therapy of 2.37 (IQR 1.06, 9.70) months. Six (18%) patients continued receiving it and 1 patient died during the first episode of aHUS. Of the 25 patients that discontinued eculizumab, 18 (72%) discontinued under physician direction (17 per protocol due to TMA remission including two with no renal recovery and end stage renal disease, and 1 due to non-response and a metabolic TMA thought more likely). Seven (28%) patients interrupted or discontinued therapy due to non-adherence.

Conclusion: Eculizumab discontinuation with close monitoring is safe in the majority of patients with aHUS (with native kidneys), with low rates of TMA recurrence and nearly complete salvage with eculizumab retreatment in the event of a recurrence. CFH and MCP variants may be associated with higher risk of relapse, which needs to be evaluated in larger, multicenter studies. 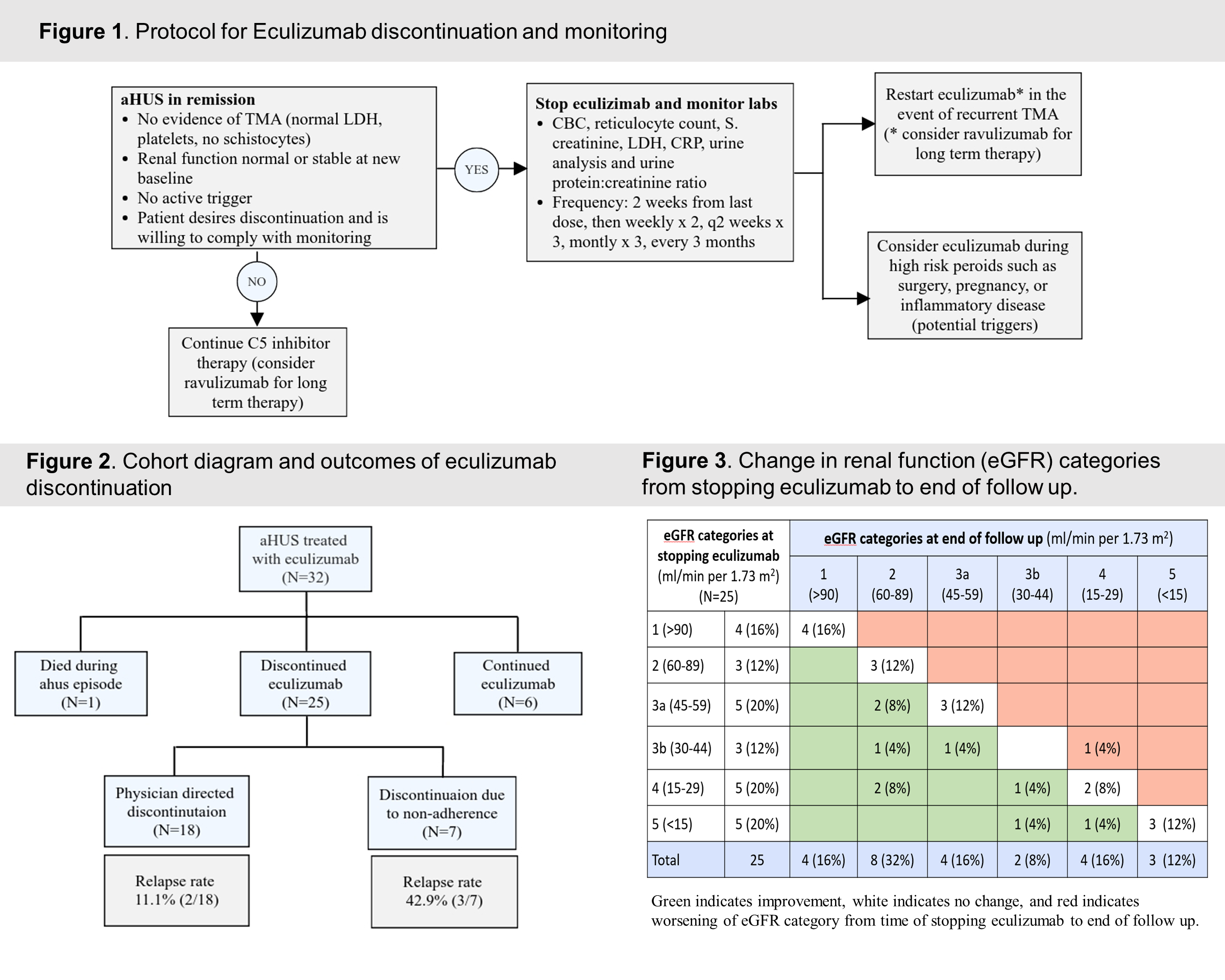