Introduction: CD74 is a type II transmembrane protein expressed on antigen-presenting cells and an MHC class II chaperone. It has been associated with tumor progression and metastasis in solid tumors, and its expression has been suggested to serve as a prognostic factor in many cancers, with higher relative expression associated with oncogenesis. As the expression of CD74 has been associated with response to bortezomib in multiple myeloma, we inquired whether such correlation might be seen in pediatric AML. We prospectively evaluated CD74 expression by difference from normal (ΔN) flow cytometry and correlated expression with clinical characteristics and outcome as part of Children’s Oncology Group protocol AAML1031 that randomized patients younger than 30 years of age with de novo AML to standard treatment with (Arm B) or without (Arm A) bortezomib. The addition of bortezomib to standard chemotherapy increased toxicity but did not improve survival. Given the association of CD74 with B-lymphoid neoplasms and bortezomib’s known efficacy in B-cell neoplasms and multiple myeloma, we hypothesized that within Arm B, the patients with CD74 expression would have a more favorable outcome.

Methods: In total, 1,139 newly diagnosed pediatric patients with de novo AML were randomized to standard chemotherapy (n=561, Arm A) or standard chemotherapy with bortezomib (n=578, Arm B). All patients received the identical chemotherapy backbone with either four intensive chemotherapy courses or three courses followed by allogeneic hematopoietic stem cell transplantation for high-risk patients. To qualify for this correlative study, 991 patients satisfied 2 criteria: (1) submitting a bone marrow aspirate for ΔN at diagnosis and (2) providing consent for correlative biology studies. All diagnostic specimens were centrally and prospectively evaluated for the expression of CD74 by ΔN. AML was considered to be CD74-positive if the MFI was more than two times above background autofluorescence and more than 40% of the leukemia was above background autofluorescence.

Conclusions: These data demonstrate that CD74 expression is associated with more favorable disease characteristics and survival. Patients receiving bortezomib that were CD74-positive showed a superior response to therapy compared to patients who did not express CD74, by both OS and EFS, suggesting that CD74-positive childhood AML patients stand to benefit from bortezomib therapy. Bortezomib may induce a mechanistic response in CD74-positive AMLs similar to that in bortezomib-treated B-cell neoplasms and/or multiple myeloma, where bortezomib has proven to be beneficial. 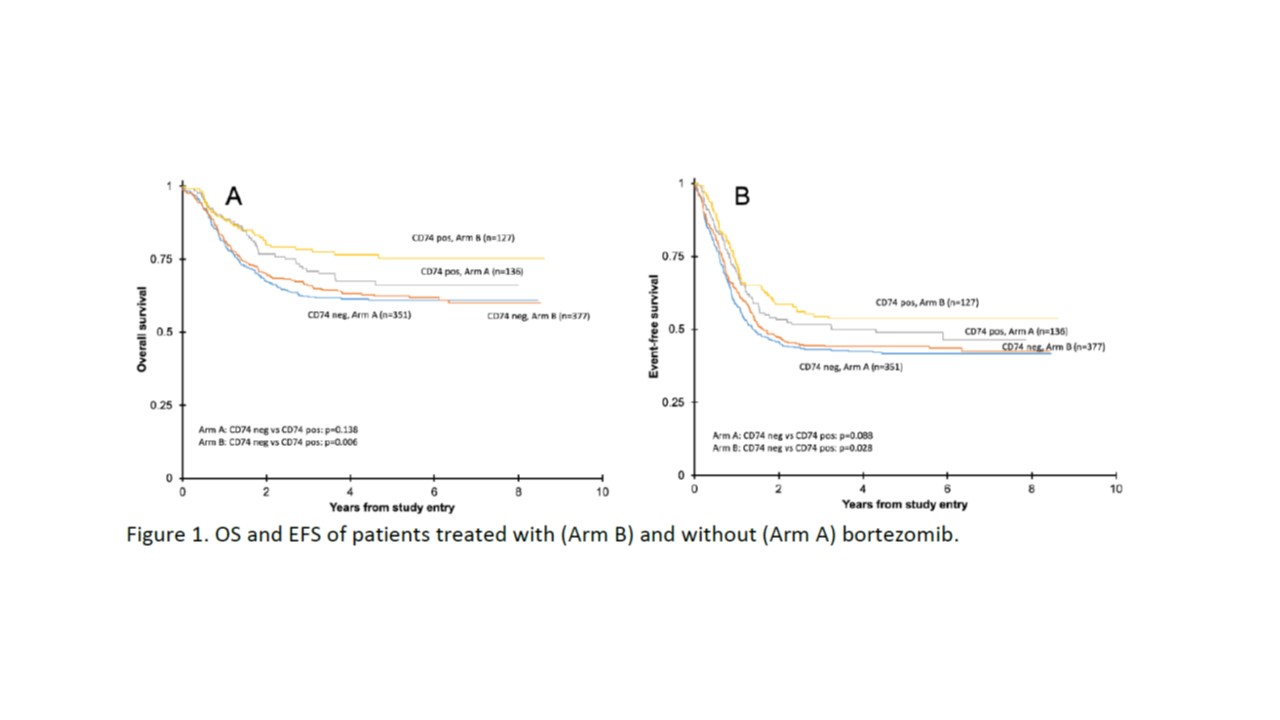 Disclosures: Cooper: Celgene: Other: Spouse was an employee of Celgene (through August 2019). Pollard: Syndax Pharmaceuticals: Membership on an entity's Board of Directors or advisory committees.