Although autologous CAR-T therapy targeting CD19+ B-cell has proven efficacy in hematological malignancies. The challenges such as undesirable waiting time, possible manufacturing failures and high cost, remain to be solved. In addition, antigen-loss/downregulation leads to treatment failure after single-target CAR-T therapy. To tackle these issues, we developed a universal CD19/CD22-targeting CAR-T cell with the TRAC region and CD52 gene disrupted using CRISPR/Cas9 technology. Pre-clinical data demonstrated the safety of CRISPR gene editing and the anti-leukemia ability of CTA101.

CTA101 was manufactured by electroporation of ribonucleoprotein complexes (RNP) comprising Cas9 loaded with sgRNA targeting TRAC and CD52 followed by lentiviral transduction of the CAR transgene. All products were expanded above 100-folds after 10-12 days manufacturing (Fig.1a). CAR expression was detected by FCM staining, ranging from 40~80% (Fig.1b). The frequency of editing as determined by flow cytometry was consistently above 85% (88%-97%) for TRAC and above 65% (68%-83%) for CD52 (Fig.1c, 1d).

QPCR assays identified no detectable rearrangements occurred with the simultaneous editing of four loci: TRAC and CD52 (TRAC-CD52) during the manufacture process. Residual Cas9 protein was quantified during the manufacturing process, showing declining levels that were 0.195 fg/cell (detection limit of sensitive ELISA) in the final product.

As of August 5th 2020, 8 adult pts were screened, and 6 adult pts were enrolled. All of 6 patients received one infusion of CTA101 (DL1: 3 pts; DL2: 3 pts), with no more than 8 days between enrollment and infusion. The median age of 6 pts was 49 years (range, 26 to 56), the median prior lines of therapies were 5 (range, 2 to 8), and the median marrow blast percentage was 52% (range, 1 to 82). 3 pts had hyperleukocytosis prior to enrollment with difficulties in apheresis for autologous CAR-T, 1 relapsed after autologous CD22 CAR-T, and 3 had high-risk genomic lesions (Table 1).

All 6 pts were available for evaluation of safety and efficacy. No DLTs, GvHD, ICANS and death occurred to date. All pts experienced CRS (3 G1, 2 G2, 1 G3), and the G3 CRS recovered within 7 days with one dose of tocilizumab and glucocorticoids. Other common AEs were prolonged cytopenia (3 G3), virus reactivation/infections (CMV 1 G2, 2 G3; ADV 1 G1), bacterial pneumonia (1 G3), and fungal sepsis (1 G3). The majority of events recovered to date. No replication competent lentivirus (RCL) has been detected.

Expansion had been observed in all pts and peaked from D10 to D14 (Fig.4). The correlation among dose level, donor difference, tumor burden and degree of expansion could not be identified. The median duration of persistence was 42 days. The lowest peak expansion was detected by qPCR in the pt without response and whose T lymphocyte recovered within D7, while FCM did not detect CTA101 expansion in the pt. 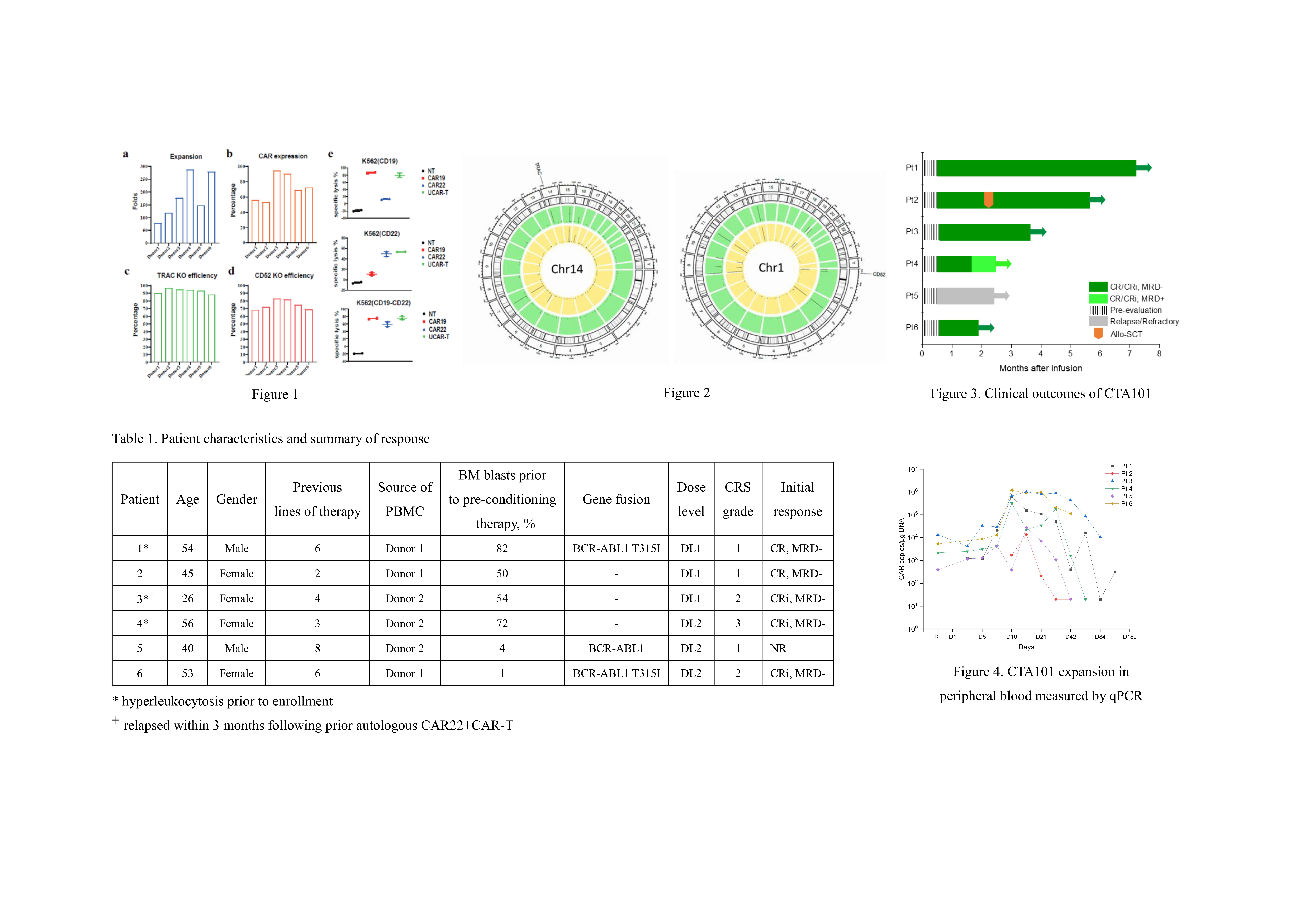