Background: Patients with B cell acute lymphoblastic leukemia (B-ALL) relapsed after allogenic hematopoietic stem cell transplantation(alloHSCT) have poor prognosis and the median survival after relapse was 4 - 5.5 months, estimated 2-year post-relapse survival rates were 10 - 16%. Donor lymphocyte infusion (DLI) have shown limited success in the setting of relapse by a mere increase in median survival by 6 months and a significant risk of acute and chronic graft-versus-host disease (GVHD) and additional risk of marrow aplasia. The donor chimeric antigen receptor-T cell (CAR-T) for CD19 is a promising treatment for relapsed and refractory B-ALL, but the effectiveness and safety of donor-derived CD19 CAR-T cell infusion for relapsed B-ALL after alloHSCT have not been determined.

Methods: Between July 2017 and Nov 2018, 10 adult patients with B-ALL relapsed (4 patients were hematologic relapsed, 3 patients were extramedullary relapse, the other 3 patients were bone marrow MRD-positive, Table) after alloHSCT were enrolled, including 9 sibling-matched stem cell transplantation and 1 haploidentical transplantation. About 100 - 200 ml venous blood form each donor was obtained and the T cells were separated. Then donor’s T cells were infected with lentivirus carrying CD19 CAR plasmid which containing CD19 scfv (HI-19 clone) and 4-1BB-CD3ζ signaling domains to generate CAR-T cells. ALL the 10 Patients received FAC (fludarabine: 25-30mg/m2/d*3, cyclophosphamide:350mg/m2/d*2, cytosine arabinoside:100mg/m2/d*4) pretreatment and then a total of 5.01 × 106/kg (range, 3.39 - 6.53 × 106/kg) donor T cells including donor-derived anti-CD19 CAR-T cell (1.82 × 106/kg, (range, 1.26 - 4.67 × 106/kg)) was infused on 2 or 3 consecutive days for each patient. The levels of cytokines including IL-1,IL-2R,IL-6,IL-8,IL-10 and the percentage of the donor anti-CD19 CAR-T cells were monitored serially . Clinical manifest and the severity of cytokine release syndrome (CRS) were recorded and evaluated. The bone marrow examination was performed every 2 weeks after CAR T-cell infusion to assess the response for the first 2 months and then was performed every 1–3 months including bone marrow smear, MRD detection by flow cytometry, fusion gene detection by quantitative real-time polymerase chain reaction (qPCR), donor chimera rate by short tandem repeat(STR).

Results: The median transduction efficiency of the final donor-derived CD19 CAR-T cells was 35.8%(range 25 - 70.6%). The peak of donor-derived anti-CD19 CAR-T cell expansion in the recipients was about 7 - 14days after infusion and then decreased rapidly. The serum cytokines levels varied differently: the serum IL-6 and IL-2R levels increased overtly and reached the peak during day 5 - day 7 in most of the patients, whereas the serum levels of IL-1, IL-8 and IL-10 did not vary obviously. one patient experienced Grade 3 CRS, 4 patients experienced Grade 2 CRS and the other 5 patients only experienced Grade 1 CRS. Four patients showed encephalopathy and 2 patients received glucocorticoid treatment. All the 10 patients achieved MRD negative remission and complete donor chimerism within 14days to 42days after donor’s CAR-T cells infusion. No patients developed acute or chronic graft-versus-host disease (GVHD). After a median follow-up of 20.6 months (range, 13.4-30.3), 5 patients (including all the 3 patients with extramedullary relapse) relapsed with leukemia cells CD19-dim and 4 of them died due to disease progression. Only one patient received a successful secondary alloHSCT from a haplo-identical donor. The other 5 patients showed persistent complete donor chimerism with MRD negative remission(Figure). The estimated 2-year overall survival and leukemia-free survival were 68.6% and 48.0%, 2.5-year OS and LFS were 51.4% and 48.0%.

Conclusion: Donor-derived CD19 CAR-T cell infusion seems to be an effective and safe treatment for B-ALL relapsed after alloHSCT, especially for those without extramedullary disease, which may be confirmed with more clinical studies. 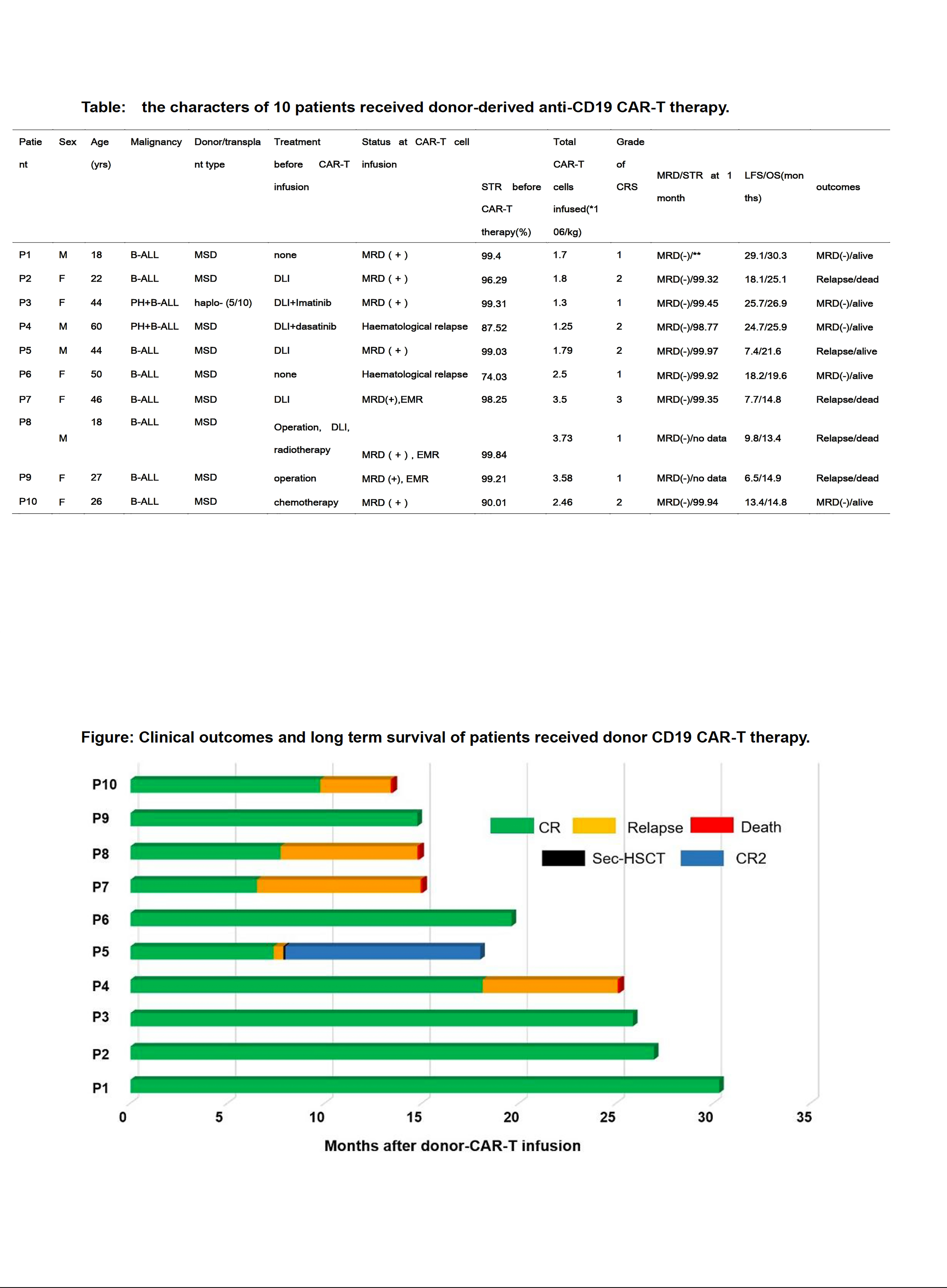