Clonal hematopoiesis (CH) in apparently healthy individuals has been investigated on the basis of either recurrent driver mutations or copy number alterations (CNAs). However, previous studies have not evaluated both alterations together at a comparable sensitivity. Thus, the combined landscape of CH with regard to both lesions, their co-occurring patterns, and their effects on clinical outcomes have not been fully elucidated.

To address this issue, we enrolled a total of 10,612 subjects from the BioBank Japan (BBJ), for whom blood-derived DNA and SNP-array data as well as a standard health record were available. All the subjects were over 60 years old and had no history of malignancy at the time of DNA sampling. Their samples were analyzed using deep sequencing and SNPs-array to detect CH-related mutations in 23 driver genes and CNAs, respectively.

Focusing on specific alterations, we found a number of significantly co-occurring combinations of mutations and CNAs, including DNMT3A mutation and 2pUPD/del(2p) (n=14, OR=4.99, q=0.02), TET2 mutation and 4qUPD/del(4q) (n=16, OR=9.10, q<0.001), JAK2 mutation and 9pUPD (n=13, OR: 231, q<0.001), and TP53 mutation and 17pUPD/del(17p) (n=8, OR=88.0, q<0.001) (Figure). Also commonly identified in myeloid neoplasms (MNs), bi-allelic involvement of driver genes in these combinations in CH might represent positive selection in early myeloid leukemogenesis. By contrast, other combinations commonly observed in myeloid neoplasms such as CBL/11qUPD, NRAS/1pUPD, or EZH2/7qLOH were rarely seen in CH, probably because these combinations are more related to progression to MNs rather than selected for CH.

Next, we evaluated correlations between CH and clinical parameters. We evaluated risk factors of CH in multivariate analysis; besides the strongest effects of age, we found that male sex independently predicted +15, del(20q), +21, and ASXL1 and PPM1D mutations, and tobacco smoking predicted ASXL1 mutations. We also observed significant associations between CH-related lesions and blood counts: JAK2 mutations with higher platelet counts (P < 0.001), PPM1D mutations and del(20q) with lower hemoglobin levels (P < 0.01), and CBL mutations with higher hemoglobin levels (P < 0.01), suggesting a unique role of each lesion in hematopoiesis.

Combined analysis of gene mutations and CNAs in CH disclosed associations between mutations and CNAs commonly seen in MNs such as those involving DNMT3A, TET2, JAK2, and TP53, suggesting the role of biallelic alteration in these genes even in early myeloid leukemogenesis. There were combined effects of CH-related mutations and CNAs on both hematological malignancies and cardiovascular diseases. 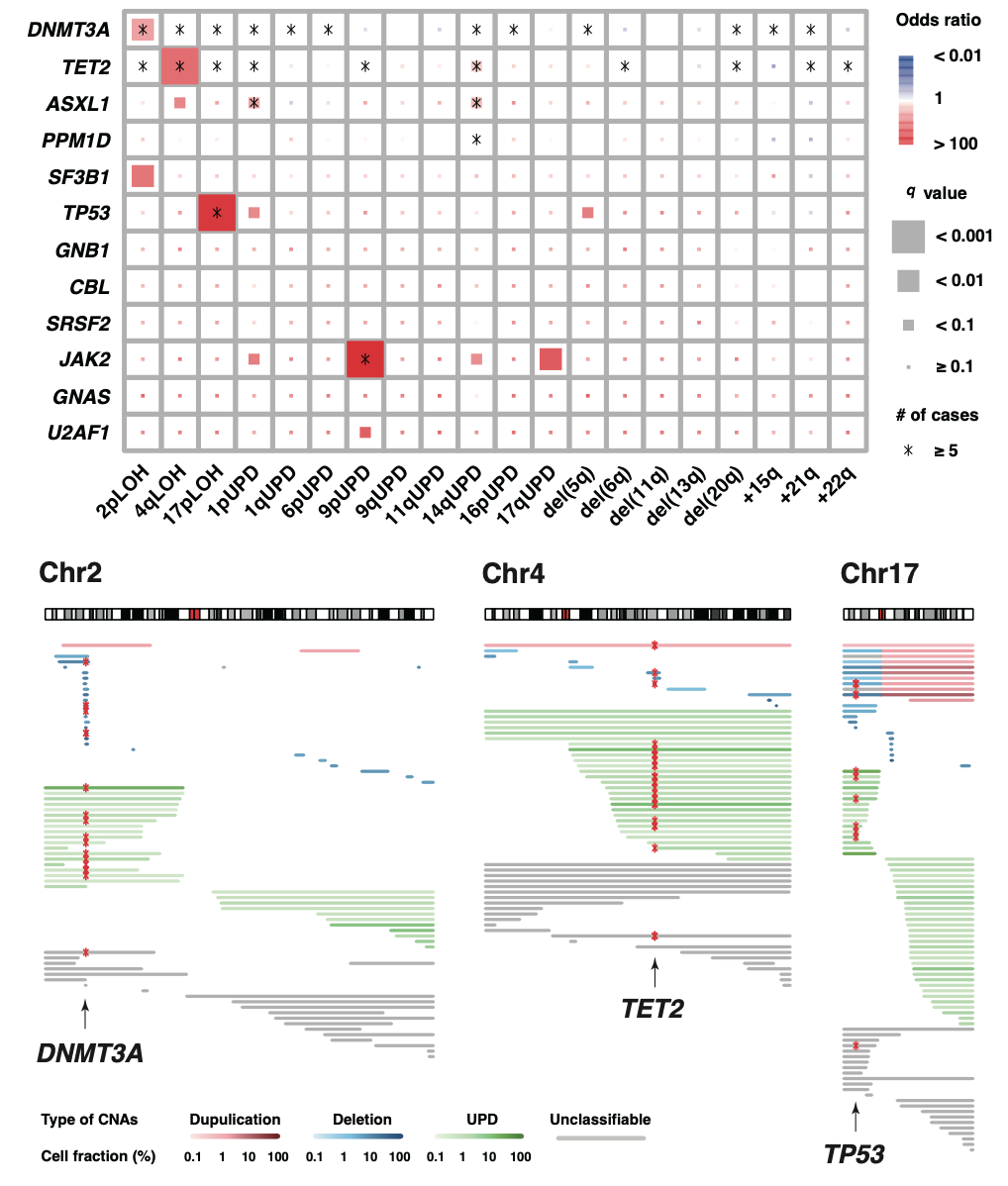