Background: Current standard of care for most patients (pts) with relapsed/refractory (RR) classical Hodgkin lymphoma (cHL) is systemic salvage chemotherapy followed by autologous stem cell transplant (ASCT). Given the treatment-related toxicities associated with ASCT and the expanding novel therapeutic options, it is desirable to identify pts with RR disease who may be cured by less toxic treatment approaches. We aimed to assess outcomes, evaluate treatment-related toxicities, and identify baseline characteristics for pts with RR cHL who were treated with radiation-based therapy as the initial salvage approach.

Methods: We conducted a multicenter, retrospective study of pts with RR cHL who did not undergo consolidative ASCT as part of their first salvage therapy and instead were treated with either RT alone or in combination with systemic therapy. Pts who received systemic therapy as first salvage but did not proceed to ASCT and then received a RT-based salvage regimen were also included. We defined relapse as recurrence of disease after achievement of complete response (CR) and primary refractory disease as failure to achieve CR in response to frontline therapy. Responses were based on treating physician assessment using Revised Response Criteria for Malignant Lymphoma (Cheson et al, JCO 2014). Kaplan Meier survival analyses were performed using STATA 15.0 software. Toxicities were recorded using NCI Common Terminology Criteria for Adverse Events (CTCAE) v.5.

Results: We identified 22 pts from 5 U.S centers with RR cHL who were treated between January 2009 and August 2019 with salvage RT alone or in combination with systemic therapy without consolidative ASCT. The pts’ characteristics are summarized in Table 1. Both pts with relapsed (68%) and refractory (32%) disease were included. All pts with relapsed disease (N = 15) had localized relapse (stage I or II) and 67% had relapsed > 12 months after completion of frontline therapy. Three pts who received frontline RT had relapsed outside their prior RT volumes. The most common reason for not pursuing ASCT was that the relapsed or residual disease was localized (38%). Other reasons cited included age (11%), comorbidities (11%), and pt preference (11%).

Pts with relapsed disease were more likely than pts with primary refractory disease to receive RT combined with systemic therapy as a salvage (60% vs 15%, p = 0.01). Out of 13, patients who received combined systemic therapy with RT, 77% (N = 10) received brentuximab vedotin (BV) and 23% received multi-agent chemotherapy. Median duration of BV treatment was 6 cycles. Four pts received multi-agent systemic salvage chemotherapy as first salvage but did not proceed to ASCT and then went on to receive a RT containing salvage regimen

In terms of toxicity, there were no deaths or hospitalizations attributed to complications from salvage therapy. The most common toxicities reported were cytopenias in 32% (N = 7) and peripheral neuropathy in 27% (N = 6). Only 3 pts experienced grade 3/4 adverse events. Systemic salvage therapy was discontinued in 3 pts due to toxicity. No long-term toxicities of RT were reported, but longer follow-up is needed.

Conclusions: To the best of our knowledge, this is the first study to evaluate outcomes for patients with RR cHL in the United States who received RT-based salvage regimens without consolidative ASCT. In our study population of pts with localized relapse or refractory disease, 81% of pts achieved CR after this non-transplant approach and 5-year PFS was 68%. Our data provides evidence that RT alone or in combination with systemic therapy can be an effective and potentially less toxic treatment strategy for carefully selected pts. Further evaluation, including with prospective studies and long-term follow-up, is needed to corroborate these findings as well as to examine potential late effects. 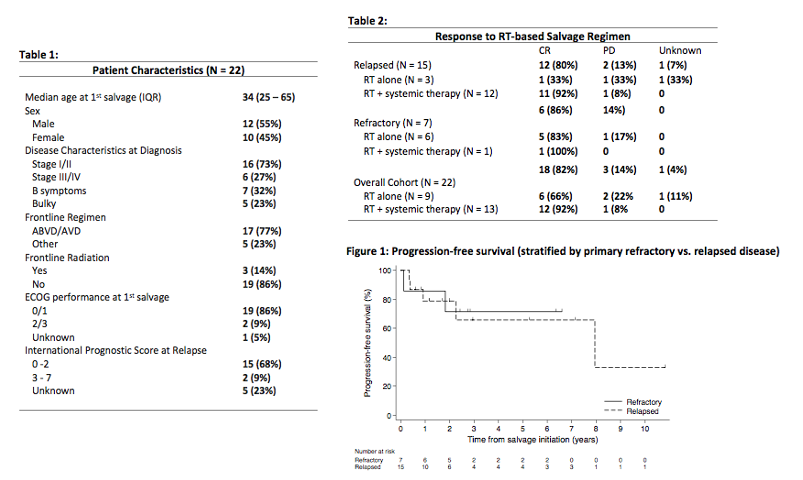