Background: By age 30, over 50% of sickle cell disease (SCD) patients have suffered a cerebral infarct. In response to anemia and the reduction in oxygen-carrying capacity, cerebral blood flow (CBF) increases to match metabolic demand. Increased velocity of CBF in major cerebral arteries is a strong risk factor for stroke in SCD children and adolescents. Despite generally increased CBF, silent cerebral infarcts (SCI) can still occur in patients receiving optimal transfusions. This suggests that the increased CBF does not meet metabolic demand and that vasodilatory response is compromised.

Methods: Functional brain imaging performed as part of routine care in adult (≥18) SCD patients (any phenotype) at the University Health Network Comprehensive Sickle Cell Center (Toronto, Canada) between 2017 and 2018 were reviewed. Patients with known cerebral vasculopathy were excluded. CVR was calculated as the change in CBF measured as the blood oxygenation level dependent (BOLD)-MRI signal, in response to a standard vasoactive stimulus of CO2 (delivered by RespirActTM). To calculate the dynamic (tau) and steady-state CVR (amplitude) components of the BOLD signal response, the PET CO2 waveform was convolved with an exponential decay function. The tau corresponding to the best fit between the convolved CO2 and BOLD signal was defined as the speed of vascular response. The slope of the regression between the convolved CO2 and BOLD signal was defined as amplitude.
CVR, amplitude and tau were normalized voxel-wise relative to the mean and standard deviation of the same metric in the corresponding voxels of a previously generated atlas of 42 healthy controls (Z scores). These Z scores were averaged over the vascular territories of the brain for both grey (GM) and white matter (WM). Fisher exact and Pearson correlations were performed to identify possible associations between CVR metrics and SCD comorbid conditions, laboratory parameters, and use of disease-modifying therapy. Associations with univariate P <0.20 were included in the multiple linear regression model. Multi-collinearity was assessed.

Conclusions: All three measures of cerebrovascular health (CVR, amplitude and tau) in SCD patients were abnormal compared to normal controls. Hematocrit appears to be the strongest independent predictor of these measures. The protocol we applied for measuring CVR provides a standardized reproducible vasodilatory stimulus, enabling comparison against a population of healthy individuals for more accurate assessment of CVR in individual subjects. Furthermore, the stimulus protocol produces rapid changes in arterial CO2 levels within one breath that can be used to measure the speed of response of the vasculature representing a novel metric of vascular performance postulated to represent vessel compliance and functional endothelial integrity. These findings show that CVR methodology represents a promising tool to assess disease state, stroke risk, and therapeutic efficacy in sickle cell patients and merits further investigation. 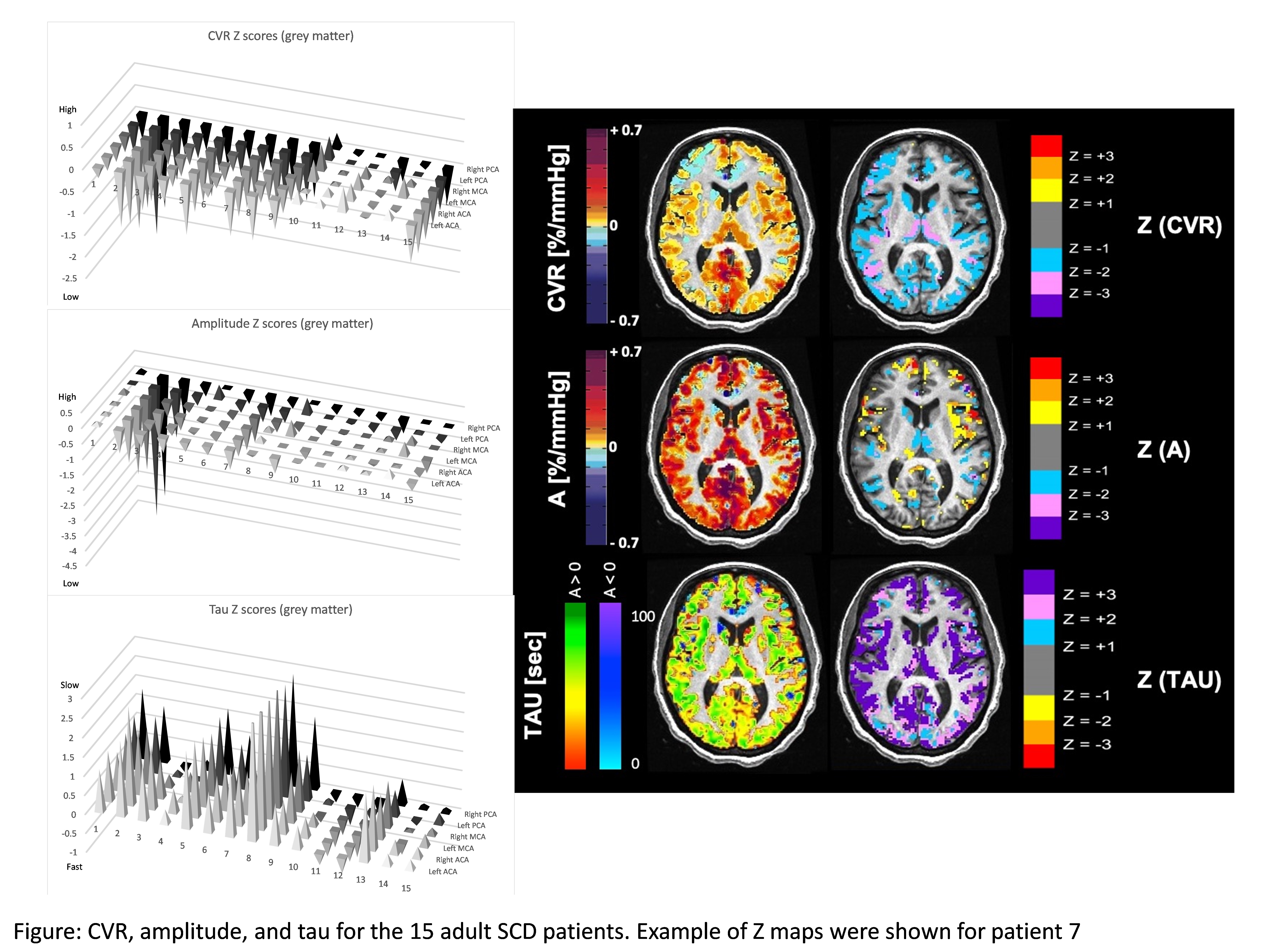