Immune checkpoint (IC) inhibitors (ICI) is a promising group of agents with potential effect in myelodysplastic syndrome (MDS). However, there is not enough data on the pattern of IC expression in MDS bone marrow, though this can guide future therapies with ICI.

In lymphoid populations we observed an extremely high percentage of PD-1 positive lymphocytes (10.5 ± 8.0% of all nucleated cells), including PD-1 positive CD4 lymphocytes (6.3 ± 3.7%) and CD8 lymphocytes (4.7 ± 3.5%). Interestingly, on average 63 ± 34% of all lymphocytes were PD-1 positive (Figure 1A), which indicates an extreme degree of T-cell exhaustion and significant exploitation of the PD-1 system by a malignant tumor. Among the PD-1 ligands PD-1L predominated, however it was present only on a small percentage of myeloid precursors (2.2 ± 0.39% of nucleated cells), but most of the PD-1L ligand expression was observed on granulocytes in the process of their differentiation from myeloid precursors (5.8 ± 4.1% of nucleated cells), and in some patients the proportion of such granulocytes reached more than 20%. Moreover, on the cells of the monocytic series, PD-1L is practically not expressed, but CD80 is expressed, a ligand for CTLA4 (1.6 ± 0.7% of nucleated cells). Interestingly, despite the presence of expression of CD80 on monocytic and dendritic cells, the receptor for this ligand on T-lymphocytes was practically absent. The proportion of such cells was only 0.02 ± 0.01%, i.e. the expression of CD80 facilitates the activation of lymphocytes through interaction with CD28 rather than the suppression of the immune response through CD152. Thus, it can be suggested that CTLA4 does not have a clinically significant role in MDS.

At the same time, a certain number of TIM3 positive lymphocytes were observed, the proportion of which was 0.42 ± 0.16%, and the percentage of lymphocytes carrying this receptor was 3.6 ± 1.2% (Figure 1A). However, significantly greater TIM3 expression was detected on NK cells. The proportion of such cells was 1.3 ± 0.6% of all nucleated cells, while 30% of all NK cells carried the TIM3 receptor (Figure 1A). Only 0.1% of cells from early myeloid progenitors that expressed TIM3 receptor were detected during flow cytometry, while the proportion of TIM3 positive myeloid cells increased during maturation just in the same way as the PD-1L. Expression of Gal9 was negligible, as it is a protein secreted into the intercellular space. Only a small percentage is associated with cell membranes.

It was found that IC system plays a role in high-risk MDS. Moreover, the expression of ligands is mainly realized during maturation of blast cells into granulocytes, which are the main population expressing these inhibitory molecules. The leading role in the suppression of the T-cell response in MDS is played by the PD-1-PD-1L system, the CTLA4 system plays a minor role in our study cohort. The second most important system is GAL9-TIM3, effecting predominantly NK cells, while T cell are less affected. Thus, the data obtained justify the trials of dual blockade with anti-PD-1 and anti-TIM3 agents in high-risk MDS. 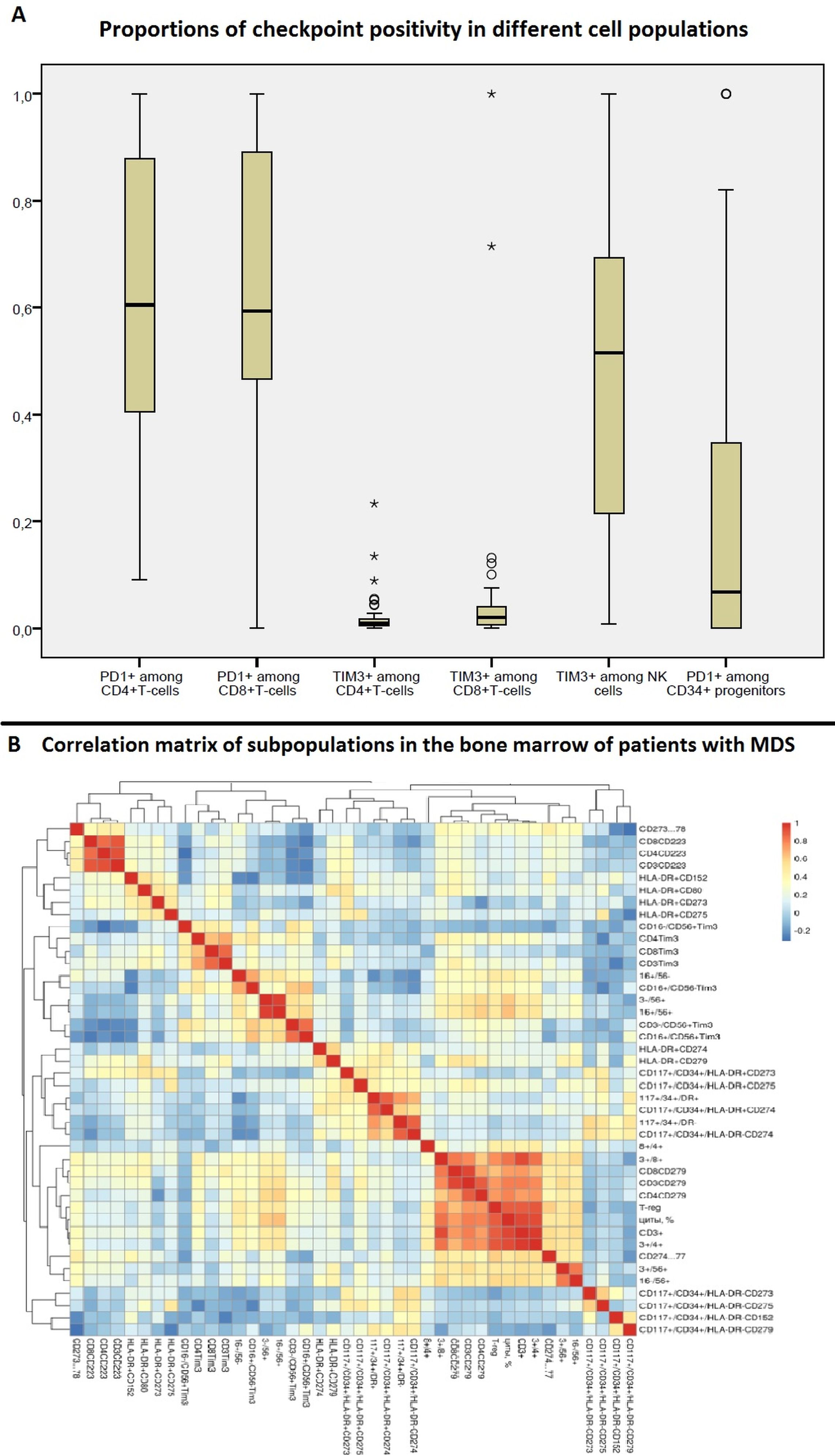