Background: Measurable residual disease (MRD) by multiparameter flow cytometry (MFC) is highly prognostic for relapse and overall survival (OS) in patients (pts) with acute lymphoblastic leukemia (ALL). However, many pts with apparent “MRD negativity” by MFC still relapse. These relapses are likely due to residual leukemia that is present below the level of detection of MFC (generally ~1x10-4). In light of the limitations of conventional MRD assays, we sought to evaluate the clinical impact of a highly sensitive next-generation sequencing (NGS)-based MRD assay that is capable of detecting residual leukemia at a level of 1x10-6.

Methods: We performed a retrospective study of 67 pts with previously untreated Philadelphia chromosome-negative ALL who received frontline therapy between 2/2012 and 7/2018 with a hyper-CVAD-based regimen (n=44) or a lower-intensity hyper-CVD-based regimen (n=23), which was usually combined with inotuzumab ozogamicin, and achieved complete remission (CR). Pts were selected for this study based on availability of banked samples at baseline and at sequential remission time points up to 4.5 months after start of therapy. Six-color MFC was performed as standard of care with an analytic sensitivity of 0.01% (1x10-4). Pretreatment genomic DNA derived from bone marrow was evaluated using a quantitative NGS MRD assay (Adaptive Biotechnologies Co., Seattle, WA) to identify dominant rearrangements within the B-cell receptor (IgH [VDJ and DJ], IgK and IgL). High throughput NGS of remission samples was subsequently performed to assess the target clonal rearrangements at an established analytic sensitivity of 0.0001% (1x10-6).

Results: The baseline characteristics of the study population are shown in Table 1. Twenty pts (30%) underwent allogeneic stem cell transplant (alloSCT) in first remission. In the entire cohort, 14 pts relapsed (21%), including 2 with CNS-only relapses. The median duration of follow-up for the entire cohort was 51 months.

Conclusion: Early assessment of MRD using an ultrasensitive NGS assay can identify pts with ALL who have a very low risk of relapse and excellent long-term survival. Prospective studies are warranted to assess whether de-intensification of therapy is feasible for this favorable-risk group of pts who rapidly achieve MRDneg remission. 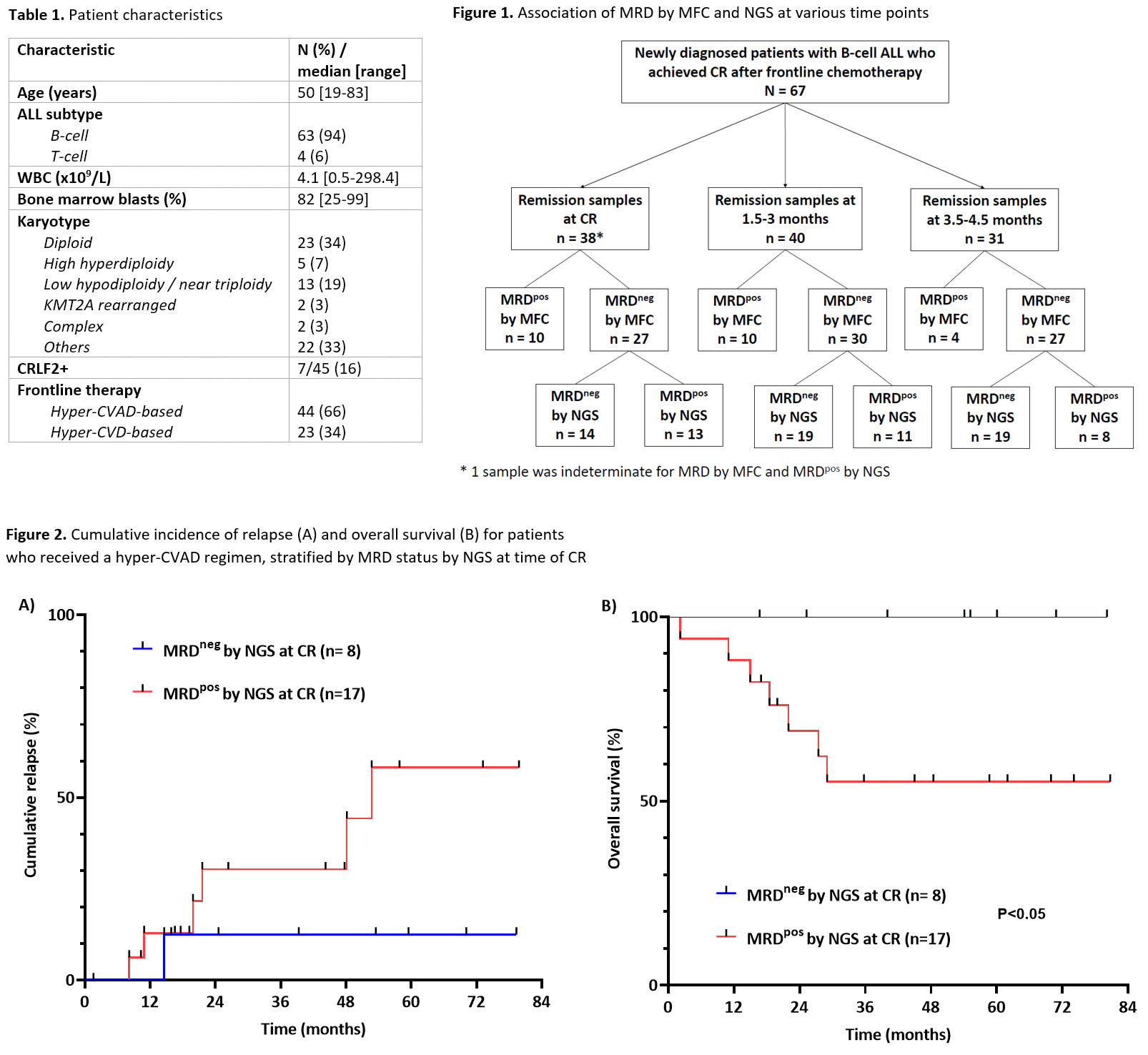