The risk of venous thromboembolism (VTE) is increased in patients with cancer and contributes to significant morbidity, treatment delays and mortality. The Khorana score is the most well-validated VTE risk prediction tool that guides use of prophylactic anticoagulation in patients with cancer. The Khorana score includes cancer type, body mass index (BMI), hemoglobin, platelet count and leukocyte count but not a prior history of VTE which may increase the risk of recurrent VTE. Scant published data have suggested that a personal history of VTE increases the risk of VTE recurrence by 2 to 7-fold after cancer diagnosis. In this study, we examine the impact of history of VTE on VTE recurrence in a large cohort of patients with cancer.

We performed a retrospective cohort study of patients diagnosed with cancer using aggregated de-identified data from electronic medical record of >300 major hospitals in US (IBM Watson Explorys). Patients with a personal history of VTE (deep vein thrombosis and/ or pulmonary embolism) more than one year prior to the diagnosis of cancer were included. Within this cohort, patients who developed recurrent VTE within 180 days of diagnosis of cancer were identified. The primary end-point was the incidence of cancer associated VTE (CVTE) in patients with prior history of VTE as compared to patients without history of VTE. Baseline characteristics including age, race, gender, BMI, prothrombotic mutations (Factor V Leiden, prothrombin gene 20210A mutation), antineoplastic agent use, cancer type and laboratory values (as included in Khorana risk score) were compared in all patients.

Our study highlights that a prior personal history of VTE >1 year before cancer diagnosis significantly increases the risk of cancer associated VTE independently, regardless of other established risk factors for VTE suggesting that this group of patients, especially those undergoing anti-cancer treatment may benefit from prophylactic anticoagulation. Increased incidence of FVL/ APC in patients with prior history of VTE and recurrent CVTE may reflect increased testing for prothrombotic mutations in this cohort. Our ongoing efforts include examining the effect of addition of history of VTE to the Khorana score. Finally, large prospective observational studies would be key to assess the impact of history of VTE on cancer thrombosis. 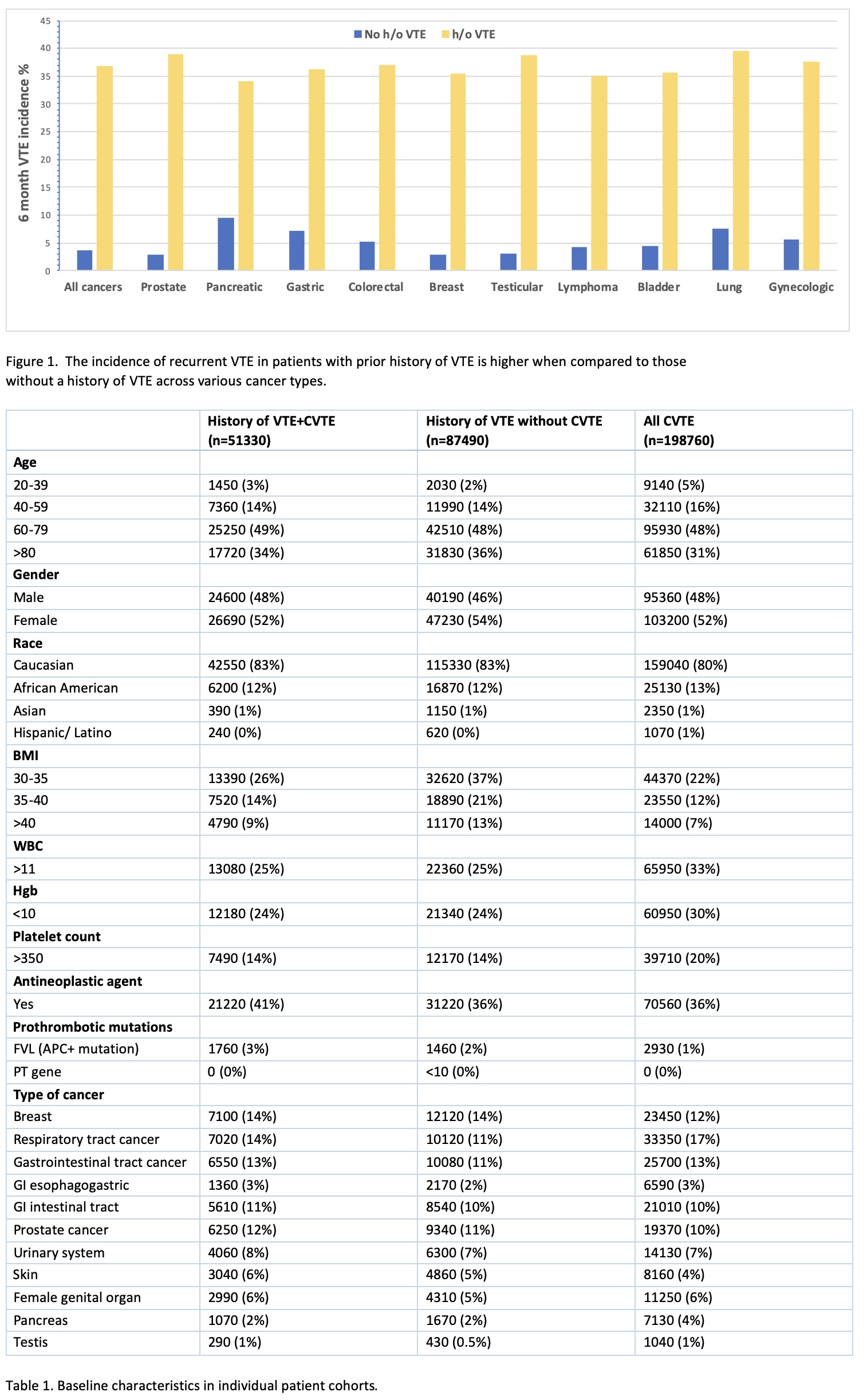 See more of: 331. Pathophysiology of Thrombosis I
See more of: Oral and Poster Abstracts
Previous Abstract | Next Abstract >>
*signifies non-member of ASH