Patients receiving the BTK inhibitor ibrutinib (ibr) for CLL rarely achieve complete remission (CR) with undetectable minimal residual disease (U-MRD) and their disease is managed with continuous ibr. Long-term therapy (Rx) with ibr results in a cumulative risk of AEs leading to Rx discontinuation. The risk of progression is highest in patients with complex karyotype and/or del(17p); some series suggest increased risk in patients with del(11q) or persistently elevated β2-microglobulin

The Bcl-2 inhibitor venetoclax (ven) is synergistic with ibr. The combination is well-tolerated and active in first-line (1L) and relapsed/refractory (R/R) patients with CLL. We hypothesized that adding ven to ibr in patients at high risk for CLL progression, who had been on ibr for more than 12 months (mo) would achieve U-MRD and allow treatment discontinuation.

We designed a phase II, investigator-initiated, response-adapted clinical trial with the addition of ven to ibr in patients (pts) with one or more high risk features for disease progression who had received at least 1y of ibr therapy (either as 1L therapy or for R/R disease). Pts had detectable disease at time of study entry without meeting IWCLL criteria for progression. High risk was defined as any of: del(17p); complex karyotype; del(11q); elevated β2-microglobulin; TP53 mutation. Ibr was continued at 140-420mg/d and standard dose-escalation of ven was performed to the target dose of 400mg/d. Rx with combined ibr and ven continued for a maximum duration of 2y. Pts had bone marrow evaluation for MRD measurement using 4 color flow cytometry (sensitivity 10-4) and CT scan for re-staging every 6mo. Pts in CR with U-MRD on two consecutive evaluations, 6mo apart, stopped ven, but could continue ibr at physician discretion. Pts not in CR with U-MRD at final re-staging after 2 years of combination therapy stopped ven and continued ibr. The primary endpoint is achievement of U-MRD after 12mo of combination Rx.

Forty-five pts have enrolled. Pre-treatment characteristics are shown in the table.

Twenty-three pts discontinued Rx (2 prior to first response assessment): 1 was found to be ineligible soon after commencing treatment; 1 developed metastatic melanoma; 1 developed metastatic lung Ca requiring chemotherapy after achieving U-MRD CR at 6mo. Of the remaining 20: 7 stopped prior to 24m (5 at 12m and 2 at 18m) after achieving U-MRD CR, per protocol; 13 completed 24m of therapy (MRD+ CR, n=3; U-MRD CR, n=4; U-MRD PR n=6). 3/11 patients with U-MRD CR continued ibrutinib per physician discretion. No pt came off study due to toxicity, no pt developed Richter Transformation and no pt died while on study. One pt had CLL progression after 18 months of combination Rx.

Treatment has been well-tolerated. There was no clinical or laboratory tumor lysis syndrome. Adverse events of all grades occurring in at least 20% of pts, regardless of attribution, were: diarrhea (n=26, 58%), neutropenia (n=17, 38%), non-melanoma skin cancer (n=14, 31%), nausea (n=13, 29%), fatigue (n=12, 27%). Grade 3 adverse events occurred in 20/45 pts (most common: neutropenia, n=8; hypertension, n=4; infections, n=4; thrombocytopenia, n=2). Grade 4 neutropenia occurred in 2 pts, grade 4 metastatic mucinous adenocarcinoma of the lung in 1 pt and myelodysplasia in 1 pt, who previously received chemoimmunotherapy. Ven was dose-reduced in 13/45 patients (to 300mg in 6 pts, 200mg in 5 pts and 100mg in 2 pt), most commonly due to neutropenia (n=7) or diarrhea (n=4). Ibr was dose-reduced in 6 pts to 140mg, most commonly due to bruising/bleeding (n=2) or neutropenia (n=2) and discontinued in 4 pts (due to AF in 2 patients, unexplained syncope in one patient and bleeding in one patient). These 4 patients continued venetoclax monotherapy on study.

Ven added to ibr in pts with high-risk CLL as consolidation was well tolerated and associated with a high likelihood of achieving U-MRD in BM and CR within 12 months of combination. This allowed Rx discontinuation in patients with high-risk CLL. Risk of disease progression during combination Rx was very low. Longer-term follow-up, including serial analysis of MRD in peripheral blood, will establish the durability of deep responses in the absence of continuous ibr Rx. 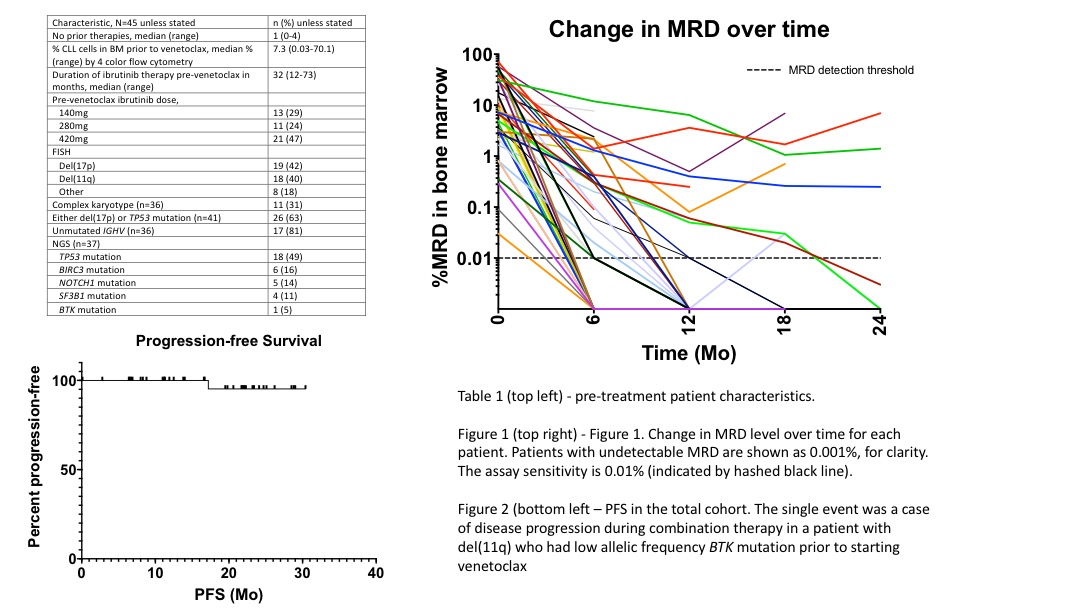