272 The Impact of Sorafenib on Phospho-FLT3 Inhibition and FLT3-ITD MRD after Chemotherapy: Correlative Studies from the Phase 2 Randomized Study of Sorafenib Versus Placebo in Combination with Intensive Chemotherapy in Previously Untreated Patients with FLT3-ITD Acute Myeloid Leukemia (ALLG AMLM16)

The Australasian Leukaemia and Lymphoma Group (ALLG) conducted a randomized trial (AMLM16) combining the FLT3 inhibitor sorafenib (SOR) or placebo (PBO) with intensive induction and consolidation chemotherapy, followed by 12 months of maintenance therapy in patients with FLT3-ITD mutant AML. The clinical results of the AMLM16 study are detailed in a companion abstract co-submitted to ASH 2020. We hypothesized that the optimal time to administer sorafenib would be d4-10 of induction in order to limit overlap with anthracyclines on d1-3 and to avoid high FLT3 ligand (FLT3L) levels beyond d10, which could abrogate FLT3 on-target activity and diminish the therapeutic index. Key objectives of the correlative studies were to correlate in vivo SOR activity on suppression of FLT3 phosphorylation (P-FLT3) using the plasma inhibitory assay (PIA) with relapse risk and to assess for the presence of FLT3-ITD measurable residual disease (MRD) after therapy.

Patients aged 18-65 years with newly diagnosed AML (excluding APML) were enrolled to a National Blood Cancer Registry; those with a FLT3-ITD mutant: wild-type allelic ratio (AR) ≥ 0.05 were eligible for enrolment to the AMLM16 study. Patients were randomized 2:1 to SOR or PBO 400mg orally bd on d4-10 of induction and each consolidation cycle in combination with intensive chemotherapy and for 12 months as maintenance monotherapy. Serum FLT3-L levels were measured by ELISA, SOR and its metabolites by mass spectrometry. SOR mediated inhibition of FLT3 was measured in serum samples using the PIA as previously described (Levis, Blood 2006) in which P-FLT3 inhibition to ≤15% baseline is defined as response. Quantitation of FLT3-ITD levels by NGS was performed at study screening and after each induction and consolidation chemotherapy cycle. Quantitation was by amplicon-based sequencing which detected ITDs >6 bp with a sensitivity of 0.001%: levels below and above this were termed measurable residual disease (MRD) negative and positive respectively. Prepared libraries were sequenced (Illumina) using 150 bp paired-end reads with a minimum coverage of 400,000 reads. Bioinformatics analysis was performed using getITD (Blätte, Leukemia, 2019).

Serial plasma samples to assess PIA were available for 63 patients (Fig A). Response to ≤15% on d10 (relative to d4) was observed in 88% of SOR patients, compared with 4.5% receiving PBO. The relapse risk was 32% and 62% among PIA responders and non-responders, respectively (Fig A). Among patients with PIA response to ≤15% by d10 (the last day of SOR/PBO), only 8.3% had evidence of a sustained PIA response by d15.

Reduction of FLT3-ITD to undetectable levels (VAF <0.001%) after induction, consolidation 1 and 2 was achieved in 43%, 63% and 77% of patients in the SOR arm and 32%, 59% and 75% in the PBO arm, respectively (Fig B, C). Patients with FLT3-ITD MRD detected or not detected after induction had a relapse risk of 54% vs 32%, respectively. Additional MRD results will be presented, along with serum SOR and metabolite levels. 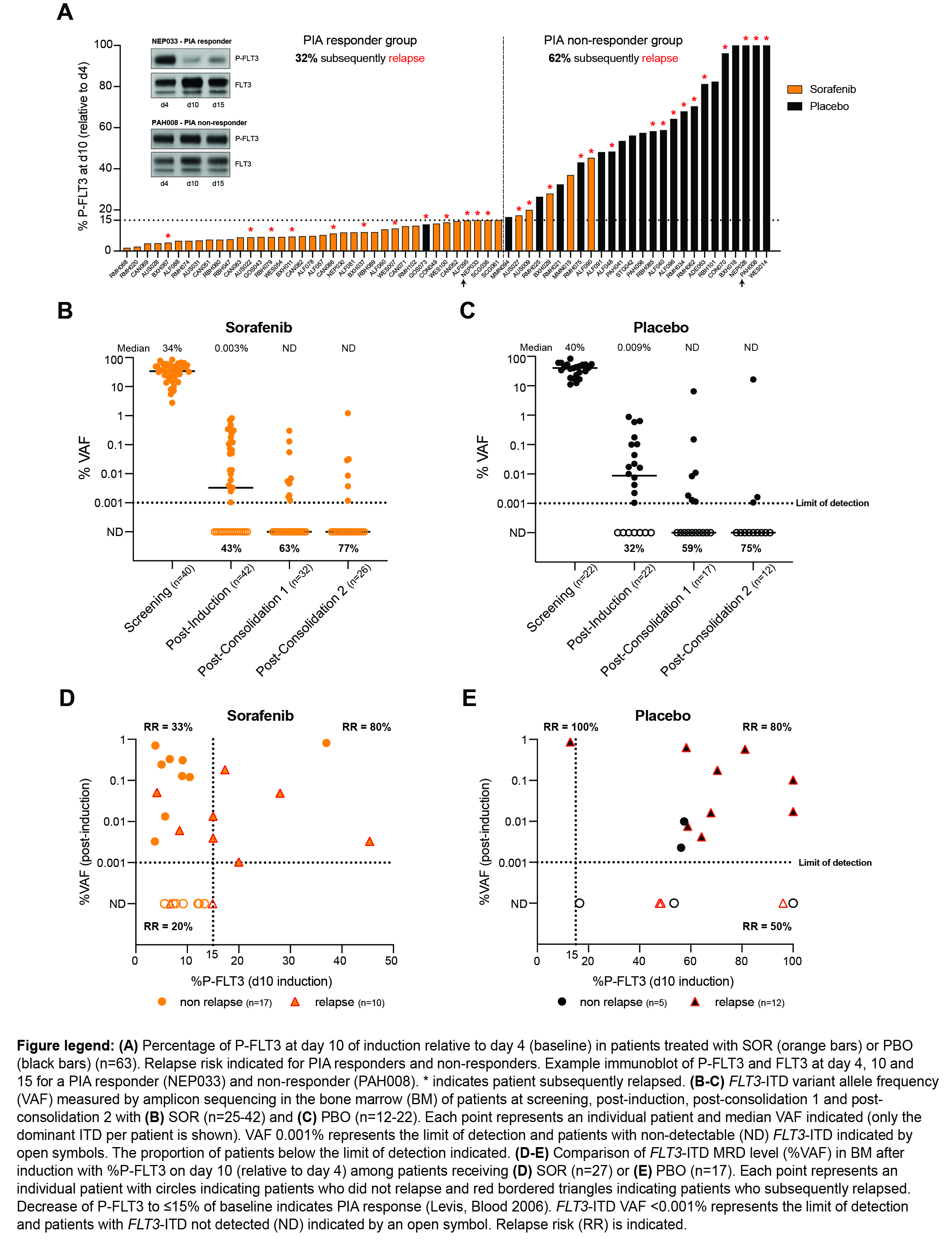