Background: Historically, the survival of adult patients with acute lymphoblastic leukemia (ALL) relapsing after allogeneic hematopoietic cell transplantation (HCT) was dismal, with fewer than 10% surviving long-term (Fielding et al Blood 2007). In the last five years, the availability of targeted immunotherapies including blinatumomab (blin), inotuzumab ozogamicin (IO), and chimeric antigen T-cell receptor (CART) therapy has expanded the opportunity for effective salvage of relapsed/refractory ALL. We hypothesized that the expanding therapeutic landscape has resulted in superior survival following post-HCT relapse in adult ALL in the targeted immunotherapy era.

Methods: We performed a retrospective analysis of adults receiving first allogeneic HCT for ALL between 2008-2019 at Stanford University; patients were stratified by time period of HCT: 2008-2013 (earlier era) vs 2014-2019 (recent immunotherapy era). Descriptive statistics characterized the study cohort; chi-square test was used to evaluate differences in characteristics and treatments based on time period transplanted. Kaplan Meier method was used to determine overall survival (OS); log-rank tested significance between time periods. Follow-up time of the earlier time period was truncated to 5.4 years to match maximum follow-up time of the more recent time period.

Results: Of the 285 adult ALL patients transplanted (N=119, 2008-2013; N=166, 2014-2019), 81 (28%) experienced disease relapse following HCT and represent the analytic cohort. Post-HCT relapse occurred in 39 (33%) transplanted between 2008-2013 and 42 (25%) transplanted between 2014-2019. The median time to relapse following HCT was 7.72 months (95% CI, 3.88-14.0), and did not significantly differ between time periods. Baseline patient and transplant characteristics were similar across the two time periods (Table 1); however, relative to the earlier time period, patients transplanted during the more recent time period were less likely to be transplanted with active disease (26% vs 2%), and more likely to receive cord blood as a stem cell source (0 vs 10%). The median overall survival (OS) for the entire cohort following post-HCT relapse was 9.93 months (95% CI, 7.07-12.73). However, the median OS from relapse was 7.99 months (95% CI, 3.30-11.6) for patients transplanted in the earlier era, while the median OS for patients relapsing in the recent era was 15.75 months (95% CI, 9.24-26.4), P<0.0001 (Figure 1A). Relative to the earlier era, the use of novel therapies for relapse following HCT increased markedly (44% vs 3%), while the use of traditional chemotherapy dropped (70% vs 38%), P<0.001 across therapies during the two time periods based on year of relapse (Figure 1B). Of the novel therapies administered, blin, IO, and CART were used with descending frequency (64%, 41%, 36%, respectively), and 8 patients received at least two novel therapies after relapse. The frequency of patients receiving no therapy for relapse decreased in the more recent time period (18% vs 10%). Donor lymphocyte infusion (DLI) was administered infrequently during both the early (6%) and more recent time periods (2%), and only two patients in the entire study cohort received a second HCT after relapse.

Conclusion: In this large cohort of adults transplanted for ALL over the last decade, we show that the OS of ALL patients relapsing after HCT has significantly improved, coinciding with a substantial increase in the availability and utilization of novel therapies in this setting. Additional studies are needed to understand the optimal therapeutic intervention for post-HCT relapse in adult ALL. 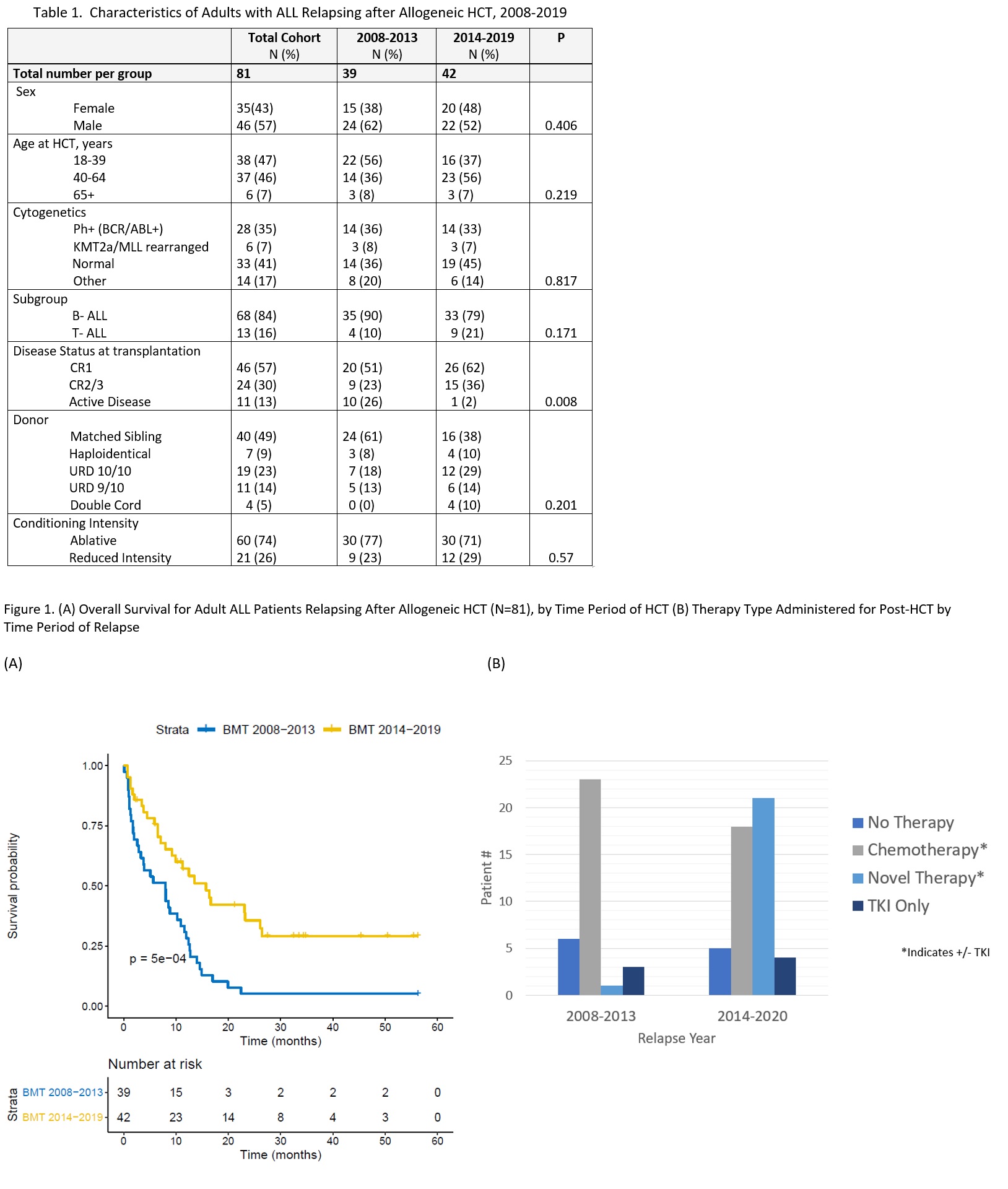