The bivalent structure of AMV564 promotes more potent binding to clustered CD33, such as that found in lipid raft regions or active signaling configurations. CD33 is an active signaling molecule on immature and immune suppressive myeloid cells such as MDSC (Chen CL et al. J Clin Invest. 2013;123:4595-611) with no apparent role on differentiated myeloid cells, but less is known about the configuration of CD33 on leukemic blasts. While CD33 is broadly expressed by leukemic blasts, the degree and homogeneity of expression can vary. The binding of AMV564 to leukemic blasts and primary human myeloid cells and impact on T cell mediated cytotoxicity was thus further explored, and novel assays for evaluation of patient samples were developed.

Results from flow cytometry assays of cell binding by AMV564 were similar whether using phycoerythrin-labeled AMV564 or a labeled anti-AMV564 antibody. AMV564 showed consistent binding characteristics for many leukemic blast lines (largely of M2 FAB subtype); however, substantial differences in binding were detected between the KG1 myeloid cell line (M2 FAB subtype) and the KG1a cell line (M0 FAB subtype) that represents a morphologically and functionally less mature state than the parental KG1. At saturating concentrations (10 nM), there was >10-fold less binding of AMV564 to KG1a vs KG1, whereas a reagent CD33 antibody (WM53) had a similar binding profile for each cell line (Figure 1). The difference in AMV564 binding between these two cell lines is reflected in the cytotoxic potency of AMV564, with a 17.6-fold difference in EC50 (0.42 pM for KG1 vs 7.39 pM for KG1a, Figure 2). AMV564 can engage CD8 and CD4 T cells to drive target-dependent killing and the difference in potency against KG1 vs KG1a was observed using both CD8 and CD4 T cells. Similarly, whereas purified naïve CD8 T cells killed KG1 effectively with AMV564, there was almost no cytotoxicity against KG1a. T cell proliferation was proportional to cytotoxicity in these assays, with much larger increases in proliferating cells apparent with KG1 target cells. There was little or no detectable AMV564 binding or killing of autologous monocytes or neutrophils. The AMV564 binding assay is compatible with primary human samples and analysis of residual samples from patients enrolled in the phase 1 AML study is underway to assess the degree of CD33 clustering on leukemic blasts and associations with response.

AMV564 demonstrated a high degree of selectivity across the myeloid lineage in a novel binding assay using labeled drug, and there was little or no evidence of cytotoxicity against differentiated myeloid cells such as neutrophils and monocytes. Furthermore, significant differences in potency across AML blasts were observed, which could be further impacted by the available T cells. While AMV564 has demonstrated anti-leukemic activity across an unselected relapsed/refractory AML population, this novel assay could be used to select patients in whom blasts are expressing CD33 in a predominantly clustered configuration, and thus identify patients most likely to experience deeper and more durable responses with AMV564 monotherapy. 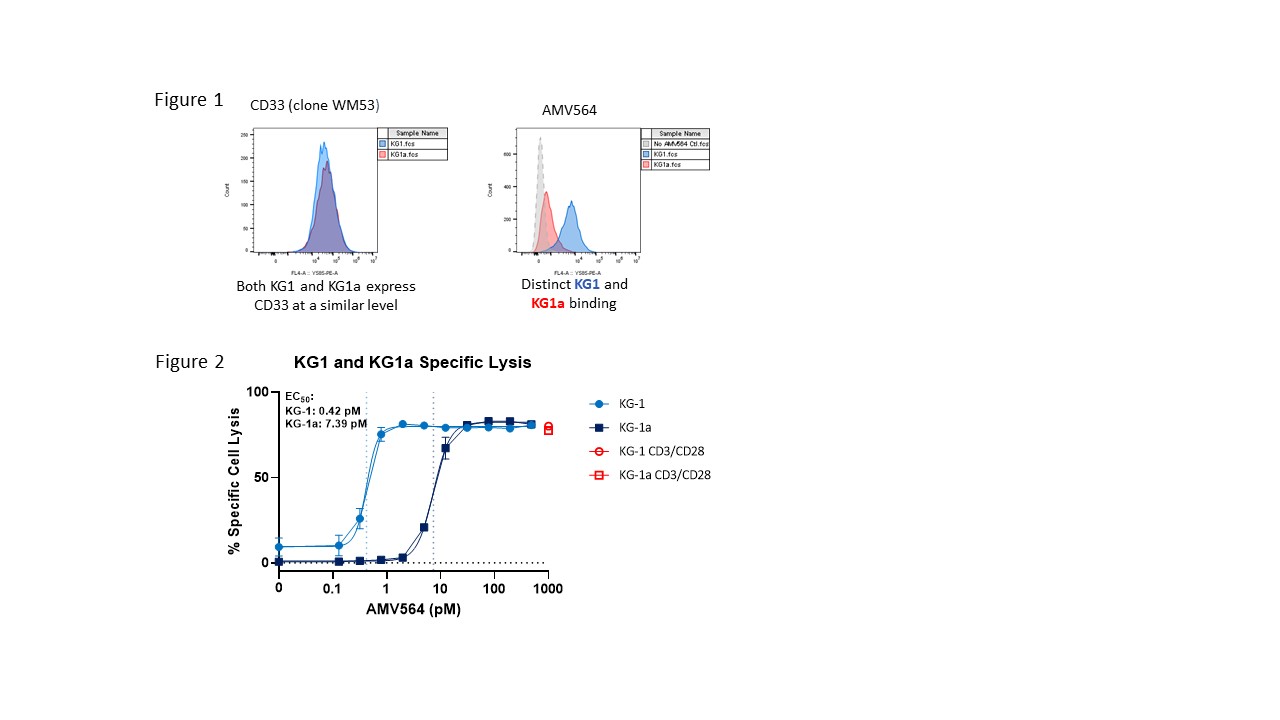