In February 2014, the Bruton tyrosine kinase inhibitor ibrutinib received FDA approval for treatment of adult Chronic Lymphocytic Leukemia (CLL) patients (pts) treated with at least one prior therapy. Subsequently, ibrutinib was approved for treatment of CLL pts with 17p deletion (July 2014) and then as initial therapy for CLL (March 2017). Although ibrutinib has been shown to have durable responses, it is associated with bleeding complications and an increased risk of atrial fibrillation (Afib) in clinical trials. We present an analysis of Afib and stroke risk associated with ibrutinib in an observational study using real-world cancer registry data.

We used the SEER-Medicare database to identify adult Medicare beneficiaries (aged 66 years or older) diagnosed with CLL between 2008-2016, who were enrolled in Medicare at least 12 months prior to CLL diagnosis, and received their care through the traditional fee-for-service system (n=4,958). Sociodemographic characteristics, as well as date and cause of death were obtained from the SEER. Comorbidities listed on the Elixhauser comorbidity index were identified from inpatient and outpatient Medicare claims in the year prior to first treatment or first Ibrutinib use. Treatment modalities, including chlorambucil, rituximab, fludarabine, cyclophosphamide, bendamustine, and prescription of ibrutinib (starting in 2014), were identified from Medicare Part B and Part D data. We categorized primary exposure as: 1) pts who did not receive any treatment for CLL; 2) those who were treated but never given ibrutinib; and, 3) those treated with ibrutinib. Our primary outcomes were Afib and stroke. We compared demographic, clinical characteristics and comorbidities, and calculated incidence rates (IR, per 1,000 person-years) across the three treatment groups. Among those who were treated (n=2,789), we used Cox proportional hazards regression with inverse probability weighting (IPW) to estimate hazard ratios (HR) and 95% confidence intervals (95% CI) for the association between ibrutinib and other treatment with stroke and Afib, adjusted for age at treatment, sex, race, and Elixhauser comorbidity index.

Among CLL pts who received treatment, after adjusting for potential confounding variables, the risk of Afib for pts treated with ibrutinib was 3-fold times the risk of pts whose treatment did not include ibrutinib (HR: 3.0; 95% CI: 2.1, 4.4). The association between ibrutinib versus other treatment with stroke was not statistically significant (HR: 1.1; 95% CI: 0.48, 2.3).

Our analysis included data of CLL treatment patterns and therapy related toxicities from the initial years after ibrutinib regulatory approval. In alignment with clinical trial results, these early real – world data show ibrutinib pts have a statistically significant risk of Afib. Our analyses did not demonstrate an association between ibrutinib treatment and risk of stroke. We also found that pts prescribed therapy for CLL, including non – ibrutinib treatments, had a higher crude incidence of stroke and Afib than pts who had not initiated treatment. Future analyses will evaluate the risk of these complications in comparison with non CLL pts as well as their correlation with treatment in the setting of widespread use of BTK inhibitors and other targeted agents for treatment of CLL. 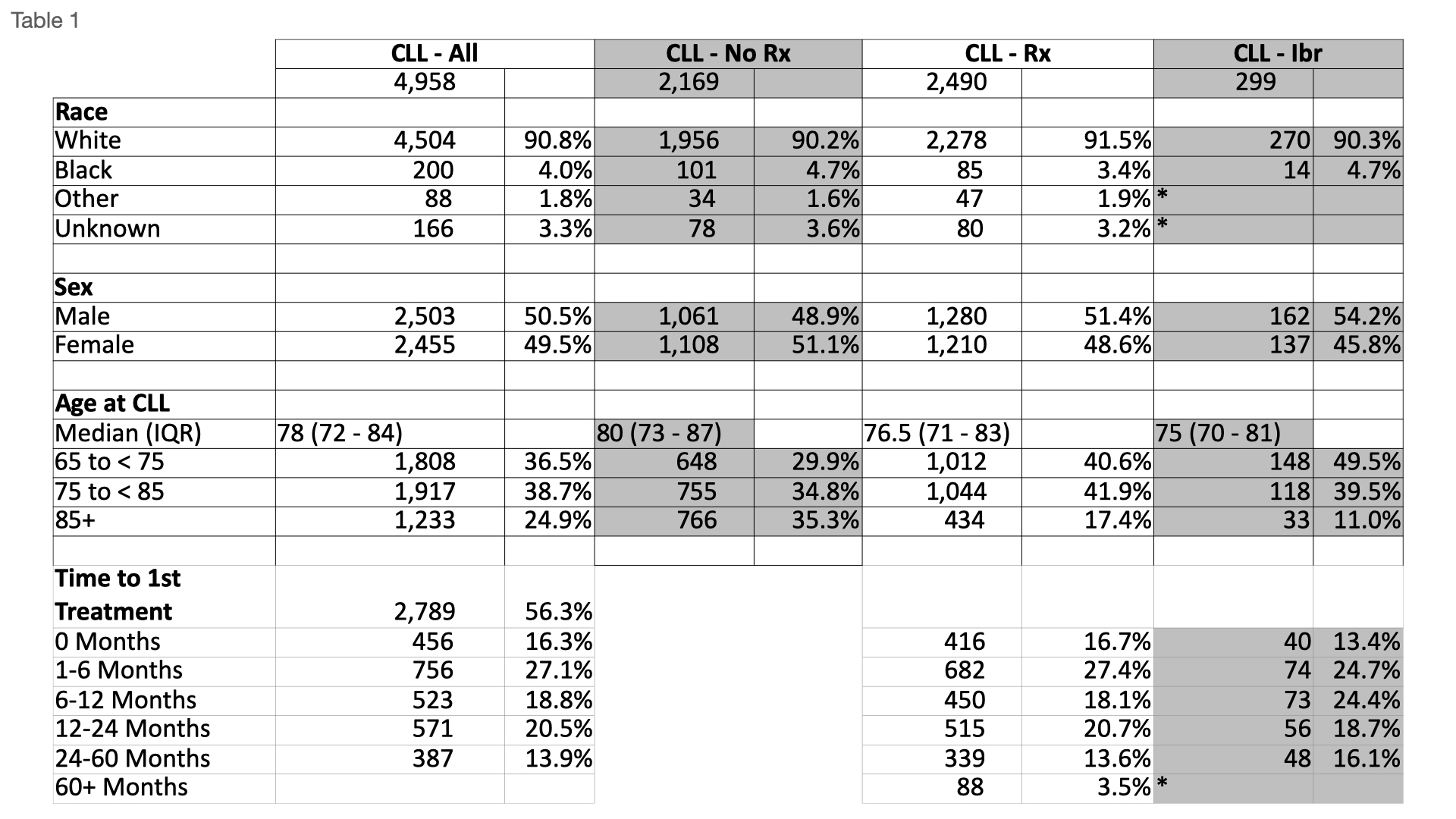