Approximately 20% of Myelodysplastic Syndromes (MDS) and Chronic Myelomonocytic Leukemia (CMML) are associated with SIAD, but pathophysiological mechanisms underlying this association remain largely unknown and data on somatic mutations are very scarce. Autoreactive T lymphocytes play a major role in SIAD development. The main objective of this study was to investigate the mutational landscape of MDS/CMML associated with SIAD, and its impact on the immunological phenotype of T lymphocytes.

This retrospective study was conducted in the hematology department of Hôpital Saint-Louis, Paris, in all MDS/CMML patients diagnosed between 2012 and 2017, and with a molecular analysis by NGS targeting a panel of 80 genes. MDS/CMML patients with associated SIAD (n= 85, whose diagnosis was based on usual international criteria) were compared with MDS/CMML patients without SIAD (n=319) who constituted the control cohort.

Flow cytometry was performed on peripheral blood samples from 28 MDS/CMML patients (of whom 12/28 had SIAD) and 18 healthy controls, on a BD Fortessa X20 to study CD8+T lymphocytes subsets and the expression of immune checkpoints. Analysis was performed with FlowAI R v1.14.0 and Cytobank website for T cells clustering with unsupervised Citrus algorithm.

SRSF2 mutations were also more frequent in the SIAD cohort (26/85 (31%) vs 47/319 (15%), p<0.01), but they were correlated with the presence of TET2 or IDH mutations, in both SIAD (p<0.01) and control (p<0.01) cohorts, which could possibly explain the higher frequency of SRSF2 mutations in our SIAD cohort.There was no difference in the rate of mutations in other genes.

Flow cytometry analysis of CD8+ T cells from TET2/IDHmut patients (17/28, 60.7%) showed an increase of the terminally differenciated effector memory T cells (p<0.01) and a reduction of the stem memory (p=0.02), central (p<0.01) and transitional (p=0.01) memory subsets. CD96 is an immune checkpoint that regulates CD8+ T-cell functions, activation and effector responses (Figure B). Interestingly, the proportion of CD8+CD96+T cells was significantly reduced in TET2/IDHmut patients (48.8% vs 71.1% respectively, p<0.05, Figure C), confirmed by unsupervised analysis using the Citrus Algorithm, and suggesting a reduced control against autoimmune reactivity. TET2/IDH mutational status had not impact on the expression of other immune checkpoints.

Our study provides an extended mutational landscape of MDS/CMML associated with SIAD, and finds a correlation between TET2/IDH mutations, T lymphocyte imbalance and association with SIAD in those diseases. This correlation could suggest common mechanisms underlying both SIAD and MDS/CMML, and reinforces our observations of a frequent positive effect of Azacytidine (a drug with better response in patients with TET2mutation) on both MDS/CMML and SIAD in patients with both disorders (Fraison, Leuk Res 2016). Further analysis of the functional role of T lymphocytes in those patients is underway. 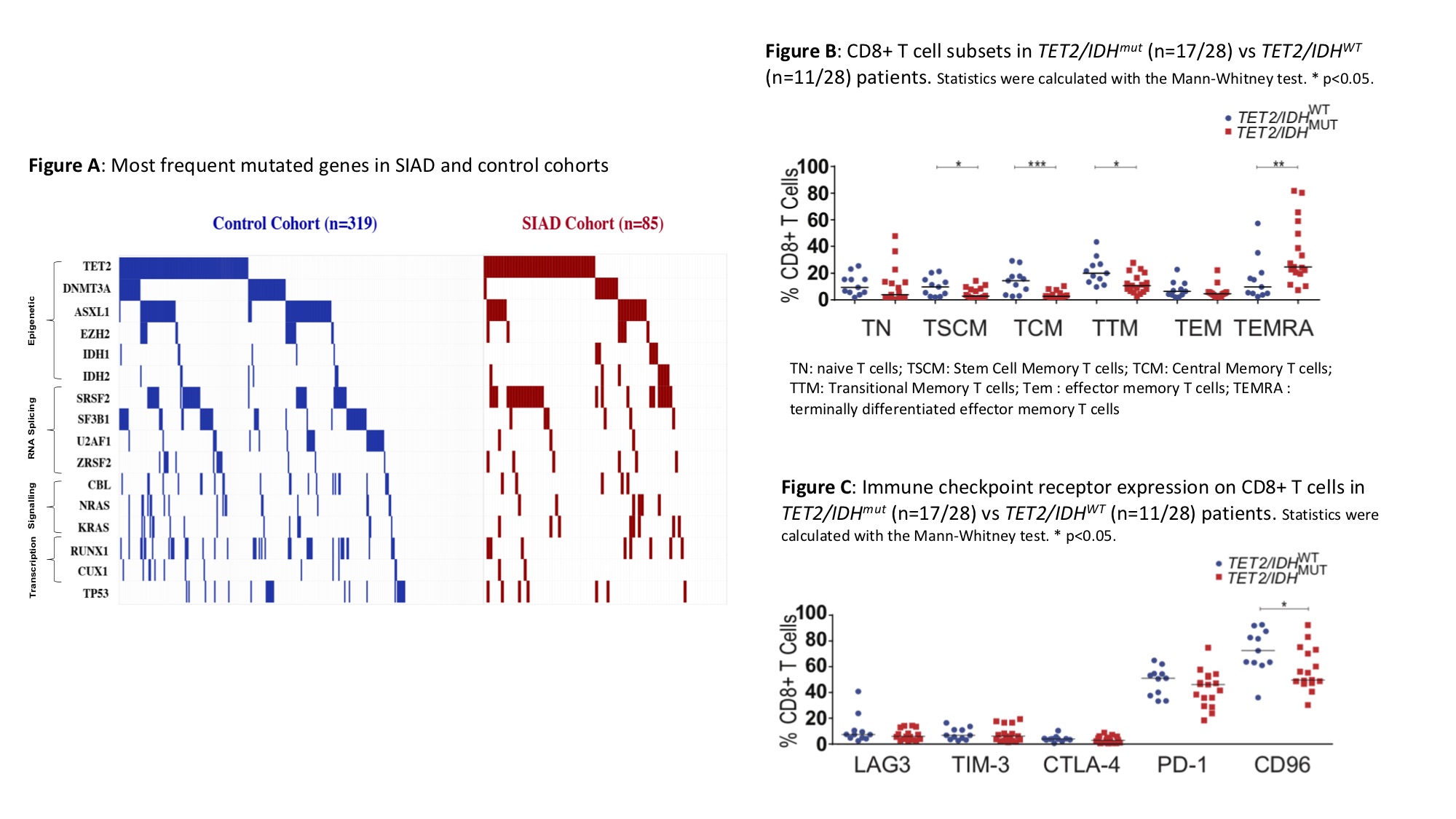