Background: Adult immune thrombocytopenia (ITP) is a rare autoimmune disease that can affect women of childbearing age. The effect of pregnancy on women with a pregestational diagnosis of ITP is still unclear and has never been prospectively studied. Objective: Investigate the effect of pregnancy on the course of ITP. Methods: We conducted a nationwide prospective multicenter observational case-control study (ClinicalTrials.gov NCT02892630). Thirty-three centers from the French ITP reference center network participated in the study. Over a two years period, we enrolled 131 pregnant women with a pregestational diagnosis of ITP and 131 non pregnant women of childbearing age with ITP who served as controls. Matching criteria included: history of splenectomy, disease status (defined as non-responder, responder or complete responder depending on platelet count and the need of treatment modification in the last 2 months) and ITP duration (i.e; persistent (<1 year) or chronic). Cases and controls were followed up for 15 months and platelets counts, hemorrhagic complications and treatment initiation or intensification for ITP were recorded. We defined ITP worsening by a combined score including the occurrence of bleeding and/or occurrence of severe thrombocytopenia (i.e. < 30 G/L) and/or changes in ITP disease status. Results: ITP worsening was significantly increased in pregnant women with ITP when compared to matched controls, affecting respectively 52.7% versus 38.2% (p= 0.05) of patients (figure 1). It occurred mainly during the second and third trimesters. However, the frequency of severe thrombocytopenia (28.2% vs 25.2%, p= 0.69) and incidence of bleeding (22.9% vs 15.3%, p= 0.15) were similar in both groups, even when considering severe bleeding only (Khellaf’s bleeding score >7) (16% vs 9.2%, p= 0.11).In contrast, initiation and intensification of therapy were significantly increased in pregnant women compared to matched controls, respectively 32.1% versus 20.6% (p = 0.01) of patients. Importantly, this increased need for therapy did not lead to an increase in maternal and obstetrical complications. In particular, we found no increase of complications that could have been exacerbated by corticosteroid and intravenous immunoglobulins use such as gestational diabetes or high blood pressure. Also compared to pre-gestational period, at 6 months post-partum, only 16.8% of pregnant women showed disease worsening. This frequency was comparable in the control group after 15 months follow-up (16.8%, p = 0.57). Conclusion: The current guidelines on therapy for pregnant women with pregestational ITP are mostly based on expert opinions and retrospective studies that mainly recommend treatment for pregnant women with a platelet count < 30 x 109/L. This prospective observational study investigating ITP progression during pregnancy shows that women with ITP were more intensively treated during pregnancy compared with matched controls. Paradoxically, this does not coincide with an increased of clinical or biological worsening in pregnant womenwhich raises questions of the relevance of this therapeutic conduct although we cannot exclude that these therapies may have prevented disease progression during pregnancy. Finally in late post-partum period, disease worsening was low and seems to be link to the natural course of the disease. 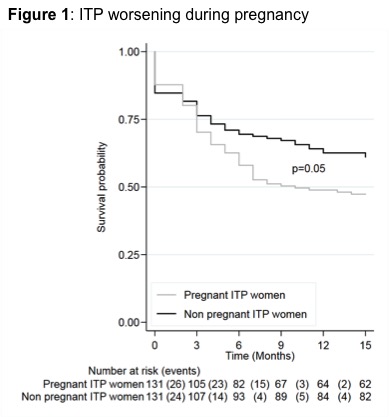