Immune thrombocytopenia (ITP) is a hematological disease associated with thrombocytopenia and bleeding diathesis. Intracranial hemorrhage (ICH) is the most devastating complication in ITP patients. Prophylaxis for ICH is indispensable due to its high mortality. However, the morbidity of ICH is quite low, which makes general prophylaxis unrealistic. A previous study demonstrated risk stratification of ICH in ITP patients before 60 years of age(Platelets, 2020). However, few studies have analyzed the risk factors and outcomes in ICH in elderly ITP patients. Thus, ascertaining the characteristics of ICH in elderly ITP patients is in urgent need to make effective assessments and provide personalized prophylaxis. Here, a retrospective study of a series of ITP patients who developed ICH ≥ 60 years of age was conducted to explore potential risk and prognostic factors, which may contributes to identifying the feasible personalized prophylaxis for ICH in elderly ITP patients.

A total of 44 patients incorporated in the study were over 60 years of age with a diagnosis of primary ITP before the onset of ICH. All measures were chronologically performed before the onset of ICH. Univariate and multivariate analyses were conducted using conditional logistic regression model. Each variables with a p-value < 0.10 in the univariate analysis and well-reported factors were included in the multivariate analysis. A stepwise approach was used to exclude variables with a p-value > 0.10.

Bleeding severity was also included in the analysis. The control group had a significantly higher probability of no bleeding(P=0.008), while the case group was more likely to suffer life-threatening bleeding(P=0.006). The anatomic sites of bleeding manifestations were then examined. There existed significant difference between cases and controls with respect to skin bleeding (P=0.002), oral cavity bleeding (P < 0.001), gastrointestinal bleeding (P=0.022) and hematuria (P < 0.001).

Univariate analysis also revealed that patients with a complication of diabetes mellitus (P=0.007) exhibited a significantly lower incidence of ICH, and fewer patients over 75 years of age developed ICH(P=0.021). Patients who had suffered head trauma before the end point of follow-up had a significantly higher probability of developing ICH (P=0.016). Moreover, patients with a duration of ITP no more than 7 days showed potential relevance (P=0.016). 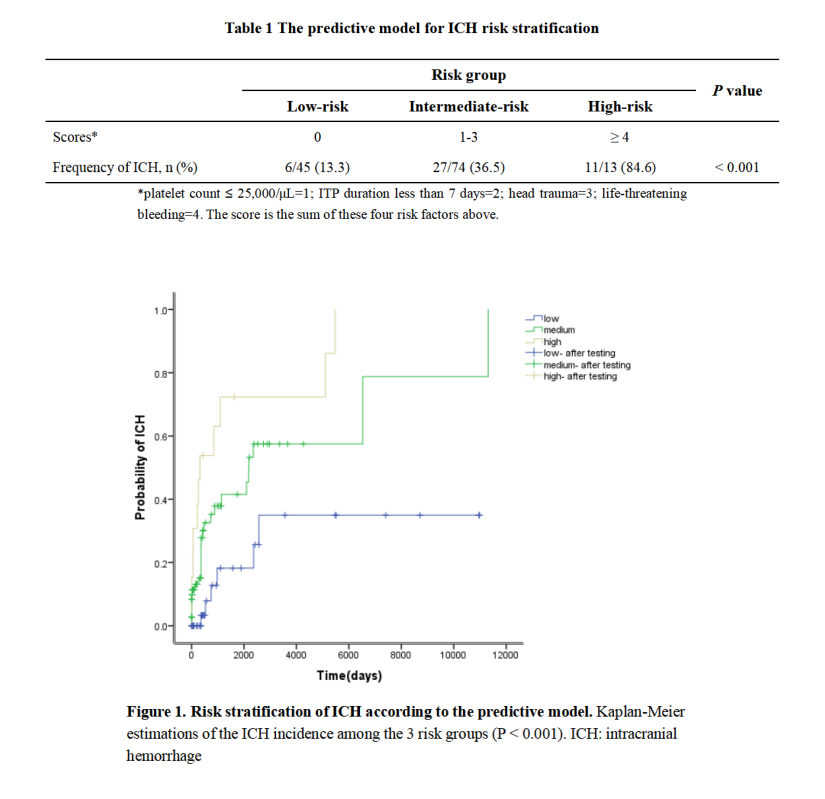