Introduction Concizumab is a high-affinity anti-tissue factor pathway inhibitor (TFPI) monoclonal antibody in clinical investigation for the subcutaneous (SC) treatment of patients with hemophilia. The data generated from phase 1 and 2 concizumab trials have been used to develop a population pharmacokinetic (PK) model with the aim of supporting dose selection for phase 3 trials.
Methods The objective of this study was to develop a model to describe the PK of concizumab across administration routes in various groups of patients with hemophilia to generate a generally applicable population PK model of concizumab. The model was developed based on available PK data from four phase 1 trials (for both intravenous [IV] and SC concizumab administration) and two phase 2 trials (for SC concizumab administration). Trial populations in the phase 1 trials included both healthy subjects and patients with hemophilia, whilst the phase 2 trials enrolled patients with hemophilia A or B with inhibitors and patients with hemophilia A without inhibitors. A structural population PK model was first developed based on phase 1 data and the final population PK model was then estimated using data from both phase 1 and phase 2 trials. Simulations were performed for phase 3 concizumab exposure using a full parametric simulation (n=10,000), including both inter‑individual and intra-individual variability for the selected population. Randomly sampled body weights from a normal distribution with mean and variance corresponding to body weight distribution from phase 2 trials were used to simulate patient profiles.
Results The population PK dataset used for the model comprised 1,504 observations from 119 subjects (89 patients and 30 healthy individuals), with a mean age of 35 years (range: 18–65 years) and mean body weight of 74.4 kg (range: 47.1–130 kg). The PK model parameters were first estimated based on phase 1 data alone, and after fixing the majority in order to ensure robustness of the model only a few parameters were re-estimated based on phase 1 and 2 data combined. The PK model (Figure 1) was evaluated by standard goodness-of-fit plots and qualification assessments. Using visual predictive checks, it was shown that the model was able to reproduce the median and the 5th and 95th percentiles of the observed concizumab concentrations from phase 1 and 2 trials, and so it was deemed suitable for simulation purposes. The PK model suggested a target‑mediated drug disposition following concizumab binding to TFPI at the endothelium, and subsequent elimination of the complex to account for the non-linear elimination.
Conclusions The developed model accurately described the PK of concizumab delivered at a wide dose range by either SC or IV administration to both healthy subjects and patients with hemophilia A or B with and without inhibitors. The model was used for simulations to select the dosing regimen for subsequent phase 3 studies. 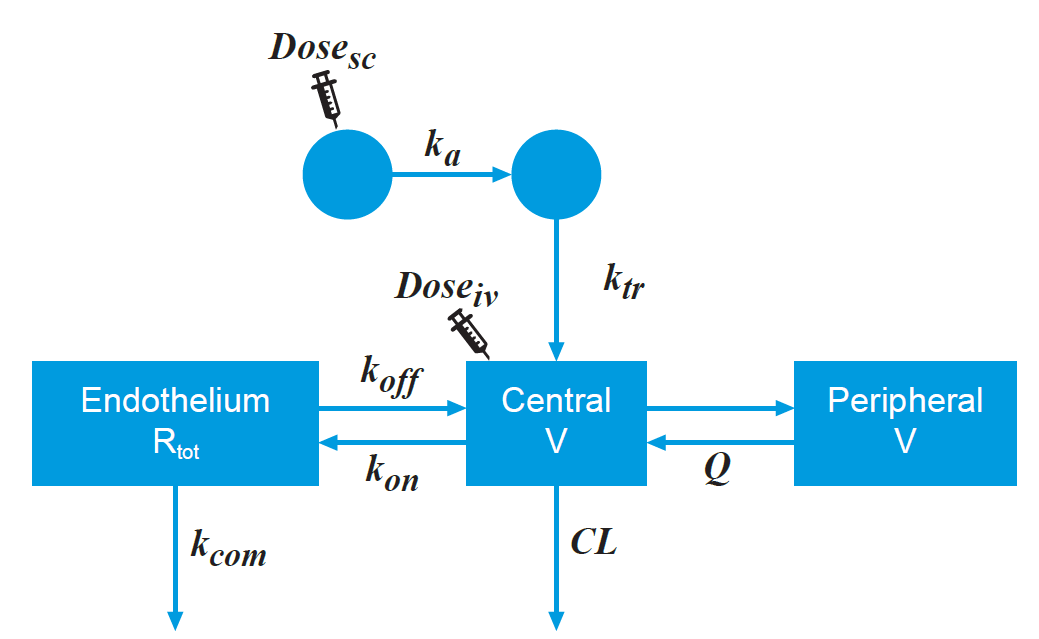