Immune thrombocytopenia (ITP) is one of the most common causes of thrombocytopenia in adults. Majority of patients are asymptomatic or might have symptoms primarily related to mucocutaneous or minor bleeding events, while severe bleeding is uncommon. ITP patients who develop severe bleeding require urgent hospitalization, but asymptomatic/minor bleeding patients might be successfully treated as outpatient. In several occasions, the latter group of patients are admitted to the hospital to initiate treatment when their platelets are very low (i.e. less than 10K). In this study we aimed to evaluate the incidence of major bleeding and medical necessity for admitting this group to the hospital.

We conducted a retrospective chart review of 559 charts with an ICD code of ITP between March 2017 to March 2020. We excluded all patients who presented with a platelet above 10K, other co-existing hematological disorders or malignancies, first presentation with platelets less than 10K with no prior known history of ITP, and charts of patients who left against medical advice prior to initiation of treatment. The definition of major bleeding included intracranial hemorrhage, or any bleeding with more than 1 gm hemoglobin drop. Minor bleeding included epistaxis, gum bleeding, hematuria, vaginal or minor GI bleeding that didn’t result in hemoglobin drop. We found a total of 66 ITP patients who were admitted to the hospital because of platelet count of less than 10K, of which 54 had minor or no bleeding episode, while 12 patients presented with major bleeding episode.

Major bleeding in patients with acute ITP is usually a clear indication for hospitalization, however there is lack of data to support admitting asymptomatic/minor bleeding ITP patients when platelets are less than 10K. Our data showed that no major bleeding event has developed in asymptomatic/minor bleeding patients at time of presentation, during hospitalization or after discharge. All 12 patients with major bleeding presented with a bleeding event that warranted their admission, of which 1 patient had spontaneous bleeding, while the rest had a clear medical reason for the major bleeding, which was likely exacerbated by thrombocytopenia. Since assessing the risk of bleeding is an important step in considering prophylactic platelet transfusion for those with platelets less than 10K, 42% of asymptomatic/minor bleeding patients received platelet transfusion during admission indicating that more than half didn’t have high risk features. Inpatient hospitalization carries a high financial burden on both the patient and the healthcare system, increases the risk of hospital acquired infections and in-hospital complications. Asymptomatic/Minor bleeding patients in our study had average LOS of 4.65 days, and all were treated with regimens that can be given as an outpatient including steroids, IVIG, and in some occasions Rituximab and/or thrombopoietin stimulating agents increasing the cost of their hospital stay. Based on our observation, we are able to conclude that this particular group of patients would possibly benefit from close monitoring of signs and symptoms, labs, and treatment all in the outpatient setting. Further studies are needed to evaluate the cost effectiveness and long-term outcome in these patients. 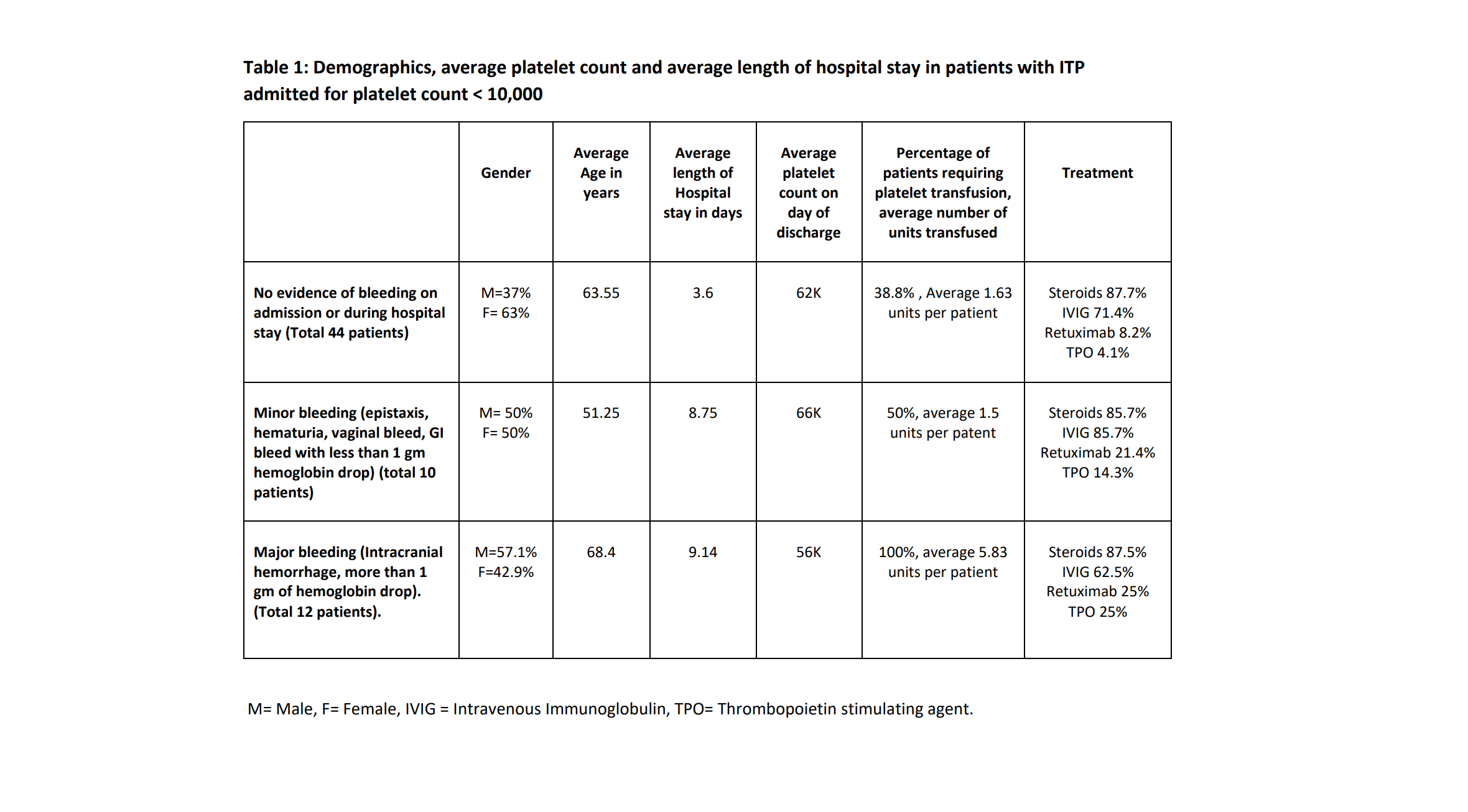