1706 Rheological Impact of GBT1118 Cessation in a Sickle Mouse Model

Background: In sickle cell disease (SCD), elevated blood viscosity is a risk factor for vaso-occlusive crisis (VOC). Blood viscosity is influenced by hemoglobin (Hb) levels, red blood cell (RBC) deformability, density, and aggregation. Voxelotor is an HbS polymerization inhibitor that increases the Hb affinity for oxygen and reduces sickling. In human subjects, voxelotor significantly increases Hb levels. A rise in Hb due to voxelotor does not increase blood viscosity the way a similar increase in unmodified HbS would. However, voxelotor transiently modifies HbS, raising concern that if voxelotor was stopped suddenly, the drug induced extra HbS would revert to its unmodified state, causing a significant rise in blood viscosity and increasing the risk of VOC. This effect could continue until the drug induced Hb is eliminated by hemolysis. To investigate this, we treated a sickle mouse model with GBT1118, a voxelotor analog. We then stopped the treatment and determined the effect on whole blood viscosity, the hematocrit-to-viscosity ratio (HVR), a measure of oxygen carrying capacity, and RBC deformability. As GBT1118 has a half-life of 14 hours in SCD mouse, we measured the post-drug effect 48 hours after drug withdrawal.

Conclusions: The GBT1118-treated sickle mouse had a significant rise in Hb and improvement in PoS and deformability. Forty-eight hours after removing the analog compound, Hb dropped markedly, and the PoS was not different from control animals, suggesting a return to native oxygen affinity and clearance of the drug. Interestingly, deformability (EImin) did not return to baseline, suggesting some residual rheological improvement occurred in the red cell population that did not dissipate when the drug was cleared. These data suggest that potential concerns regarding viscosity rising above pre-treatment levels upon sudden cessation of voxelotor are not warranted. This may be due to retained improvement in red cell rheology after voxelotor is stopped combined with rapid return to baseline Hb levels. Further study in patients treated with voxelotor may be needed to determine if voxelotor produces additional benefits, such as reduction in oxidative stress, that outlive its presence in the red cell. 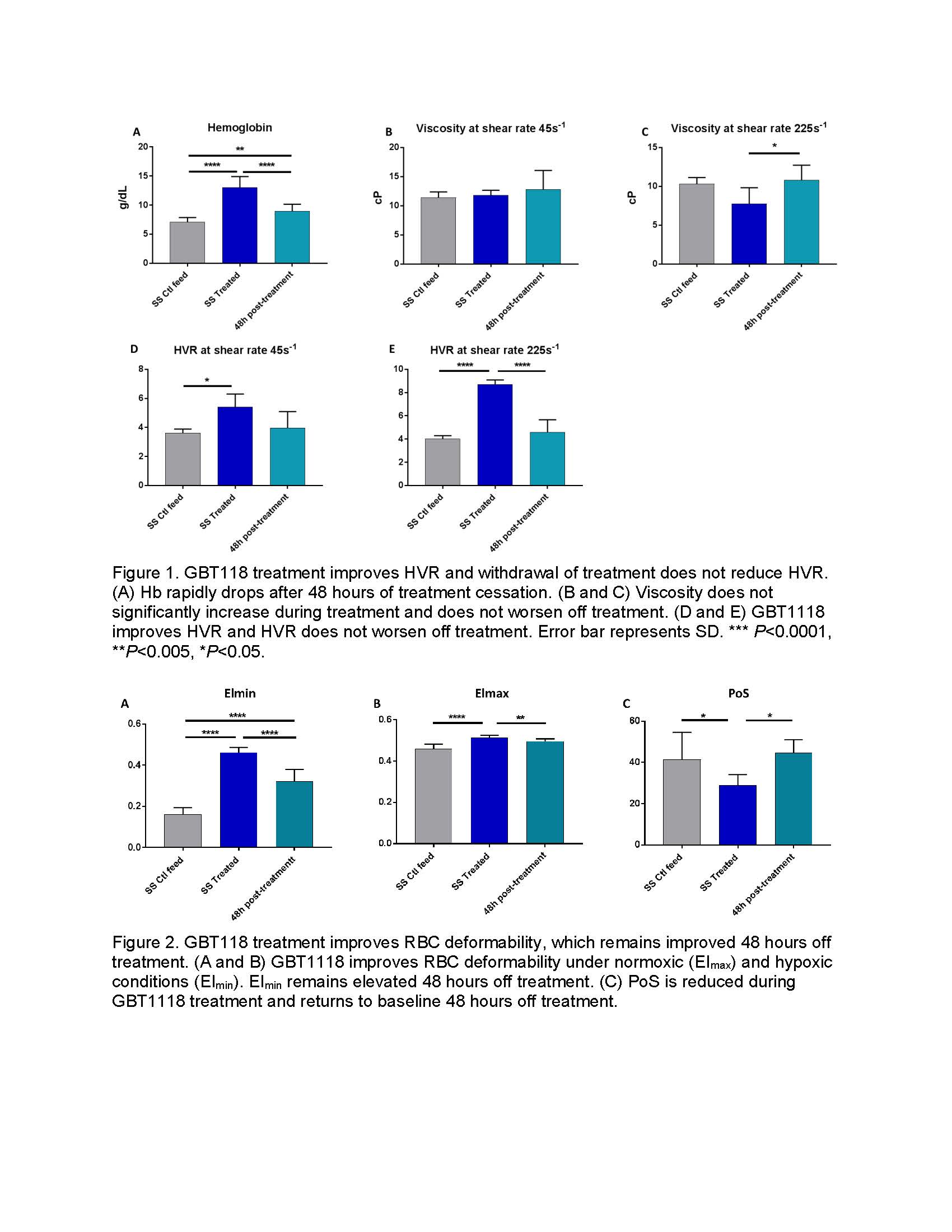