47 Do Not Miss Karyotyping at Chronic Myeloid Leukemia Diagnosis: An Italian Campus CML Study on the Role of Complex Variant Translocations

Background. The Philadelphia (Ph) chromosome (chr.) is the hallmark of chronic myeloid leukemia (CML) and typically results from the reciprocal translocation t(9;22)(q34;11.2). Complex variant translocations (CVT) involving one or more additional chr. are identified in less than 5% of newly diagnosed CML. There are conflicting reports about the prognostic impact of CVT in the achievement of optimal response to tyrosine kinase inhibitor (TKI), and very few studies addressed the role of frontline treatment with imatinib or second generation (2G)-TKI in patients with CVT.

Aims. To assess the response to imatinib or 2G-TKI in a large cohort of newly diagnosed CML with CVT, and to explore the impact of the different chr. translocations on outcome.

Methods. This observational retrospective study was conducted in 19 hematologic centers in the framework of Campus CML, a network of Italian physicians involved in the management of CML patients. All newly diagnosed CML from 2000 to 2019 were evaluated and patients with CVT were selected for the present analysis. Karyotypes were defined according to the 2016 International System for Human Cytogenetic Nomenclature. Responses to frontline treatment were retrospectively categorized according to the 2013 ELN recommendations, as they include cytogenetic milestones. Deep molecular response (DMR, i.e. MR4or better) was defined as BCR-ABLIS ratio ≤0.01% or undetectable disease with ≥10,000 ABL copies. Patients with DMR lasting ≥2 years and at least a Q-PCR test every 6 months were defined as stable DMR responders. Failure-free survival (FFS) was calculated from the start of frontline TKI treatment to progression to advanced phase, death, or switch to other treatments for resistance. For FFS calculation, patients were censored at TKI stop for treatment-free remission (TFR) or in case of switch for intolerance only. Differences between subgroups according to the partner chr. were presented for descriptive purposes.

Conclusions. Due to its retrospective nature, this study does not allow to define which is the optimal therapy for CML harboring CVT at diagnosis. However, our data reinforce the usefulness of bone marrow karyotyping in CML. The observed differences between partner chr. may also depend on the breaking points, which are variable. Further dissection of CVT will help to identify which are associated to a poor response to TKIs. 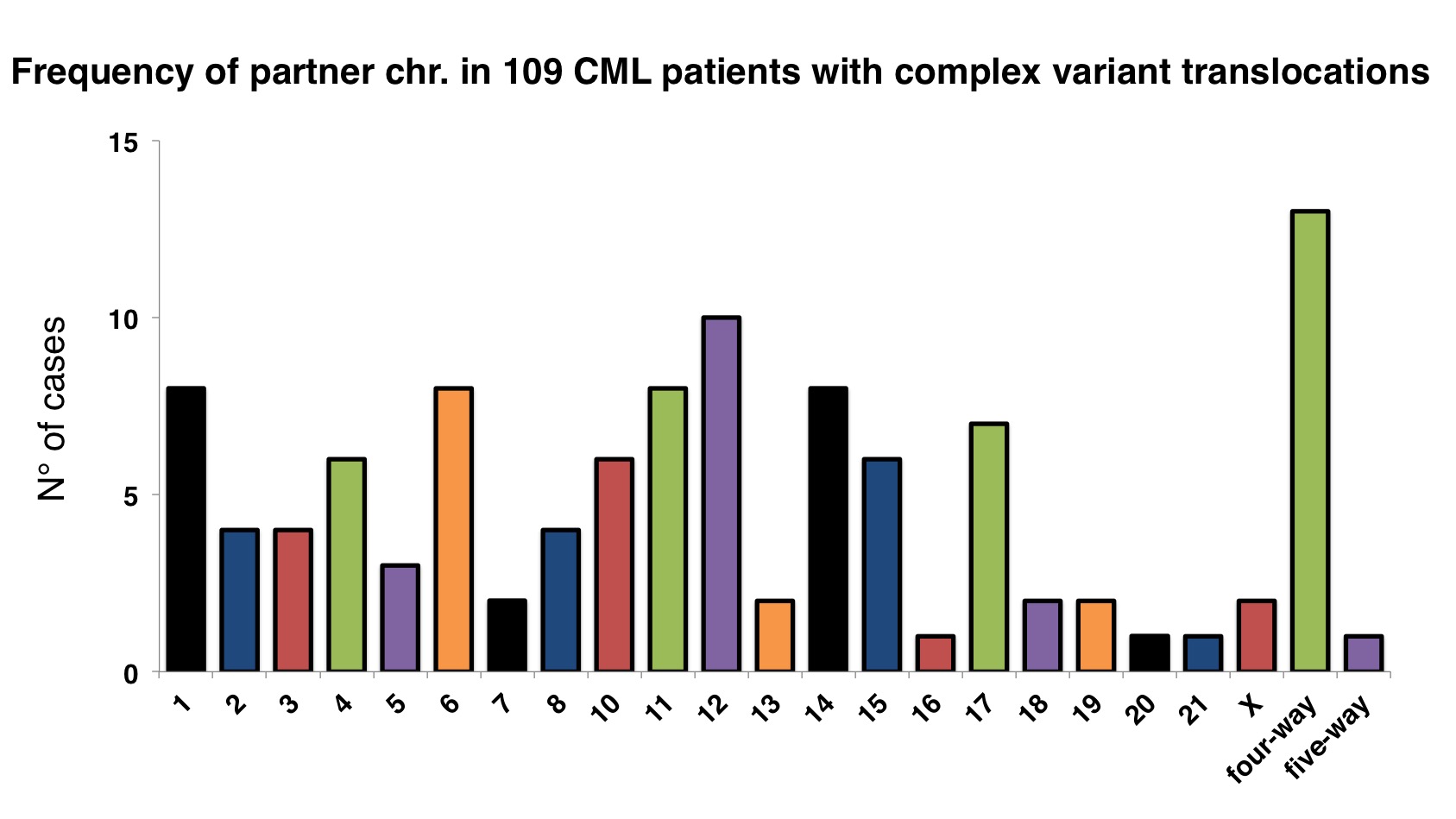