Background: The extent of cardiac involvement has a major impact on clinical outcomes in patients with newly diagnosed light chain (AL) amyloidosis. Here, we present the hematologic responses, major organ deterioration progression-free survival (MOD-PFS) and event-free survival (MOD-EFS), and organ responses by cardiac stage in patients with newly diagnosed AL amyloidosis treated with cyclophosphamide, bortezomib, and dexamethasone (VCd) with or without daratumumab subcutaneous (DARA SC) in the ANDROMEDA trial (NCT03201965).

Results: A total of 388 patients were randomized to receive DARA-VCd (n=195) or VCd alone (n=193). Baseline characteristics were well balanced between treatment groups. The median age was 64 years and the proportions of patients with cardiac stage I, II, and III were 23%, 40%, and 37%, respectively. The median duration of treatment was 9.6 months for DARA-VCd and 5.3 months for VCd. Median follow-up was 11.4 months (range, 0.03-21.3+). Baseline characteristics were generally balanced across cardiac stages, except increasing cardiac stage was associated with older age (≥65 years), worse Eastern Cooperative Oncology Group performance status, more advanced renal failure (CrCl ≤30), and functionally worse heart failure (NYHA IIIA). Hematologic CR rates were higher in the DARA-VCd group than in the VCd group in patients with cardiac stages I, II, and III at baseline (Table). Cardiac and renal response rates at 6 months were also higher in the DARA-VCd group regardless of cardiac stage at baseline (Table). The hazard ratios (HRs) for MOD-PFS were 0.33, 0.55 and 0.66 for cardiac stages I, II and III, respectively, favoring DARA-VCd. Corresponding HRs for MOD-EFS were 0.24, 0.39, and 0.48, respectively. Rates of any grade adverse events (AEs) were similar in patients with and without cardiac involvement at baseline. Across both treatment arms, rates of serious treatment-emergent AEs were higher in patients with cardiac involvement at baseline than in those without.

Conclusions: The benefit of DARA-VCd was retained over VCd alone across cardiac stages for hematologic CR, MOD-PFS, MOD-EFS, and organ responses. 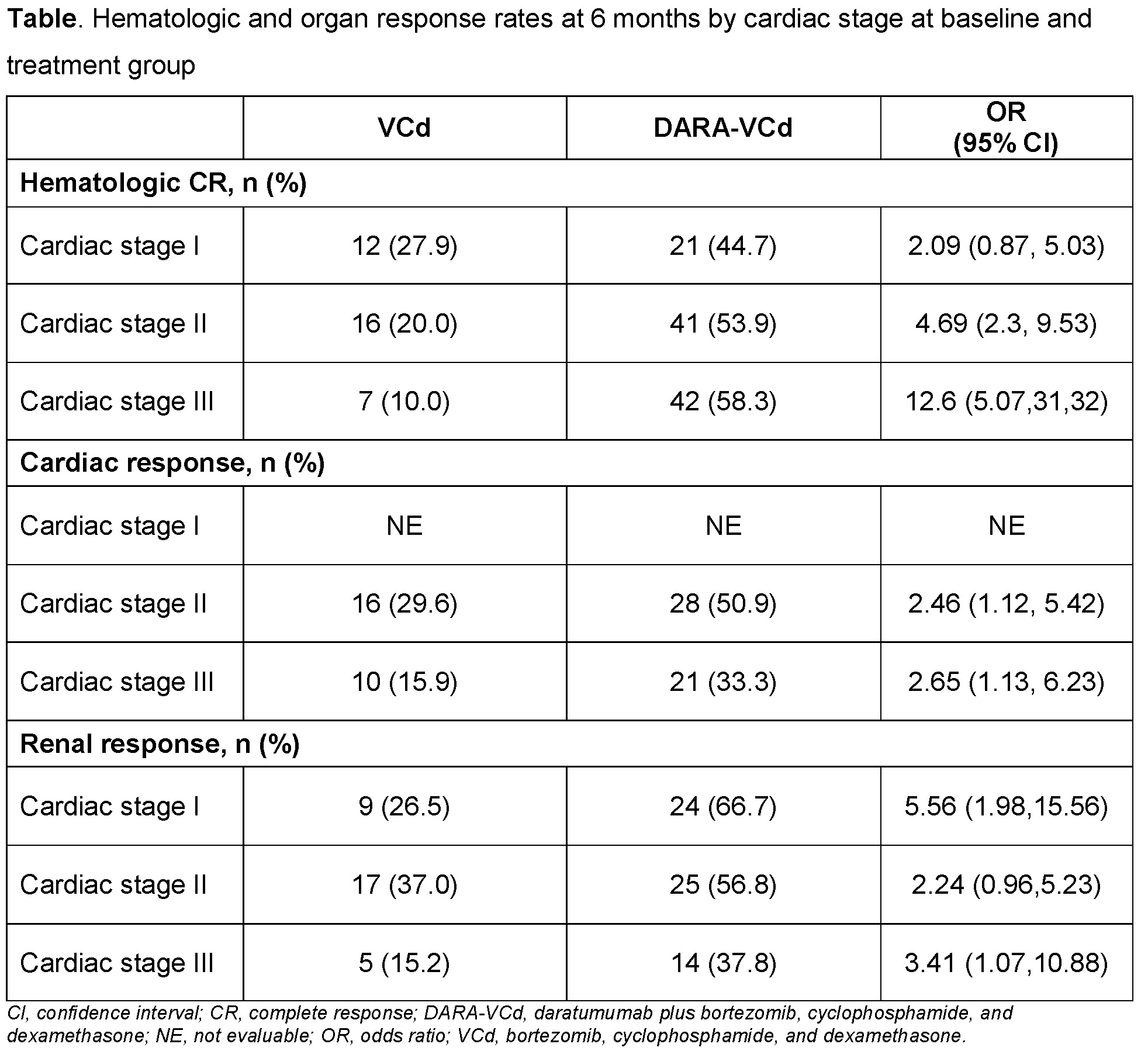