Proliferative glomerulonephritis with monoclonal immune deposits (PGNMID) and C3 glomerulopathy (C3G) with monoclonal gammopathy (MG) are kidney diseases related to monoclonal gammopathy of renal significance (MGRS). Rituximab or combination of cyclophosphamide, bortezomib and dexamethasone have been used with variable success but no clinical trial has been performed up to now. In this phase 2 trial, we evaluated the safety and efficacy of daratumumab (an anti-CD38 plasma therapy) in patients with PGNMID and C3G with MG. The primary objective was safety and tolerability of daratumumab. The secondary objective was the response rate to daratumumab. Response was defined by complete remission (CR) (proteinuria <500 mg/d and no more than 10% drop in eGFR) or partial remission (PR) (50% reduction in proteinuria with no more than 30% drop in eGFR) at 6 and 12 months. Daratumumab was administered intravenously at a dose of 16mg/kg once weekly for 8 weeks followed by once every other week for an additional 8 doses. Twelve patients were recruited. There was only one patient with C3G with MG recruited and one patient with PGNMID did not finish the first infusion of daratumumab. Both were excluded from evaluation of the secondary objective. The patient with C3G was excluded as later it was noted that the disease was not triggered by the MG but rather due to activation of her alternative complement pathway due to high-risk allele for complement Factor H (CFH) and C3. Mean age was 51.2 ± 22.6 (18-87) years. All patients were White and 5 were male. For the primary objective, there were five serious adverse events (SAE). Two were serious infections that occurred in the patient with C3G with MG. At the time of these infections, patient was receiving additional immunosuppression with tacrolimus, mycophenolate mofetil and prednisone. One was a febrile episode attributed to a virus that resolved with stopping additional immunosuppression, and another was an episode of C. difficile colitis that resolved following treatment. There were 3 episodes of uncomplicated UTI that resolved following antibiotic therapy and one episode of URI that required no treatment. The other two SAE were eye chemosis and headache in the same patient that resolved. Last SAE was an episode of acute closed angle glaucoma that occurred 45 min into the 1st infusion. This patient was withdrawn from the study. The most common side effect was infusion related reaction (with first infusion) that included cough, congestion, and throat irritation that resolved by the end of the infusion. There were no grade 3 or 4 anemia, thrombocytopenia or leukopenia. At 6 months, 2 patients achieved CR, 6 achieved PR and 2 had no response (NR). At 12 months, the 2 patients who had NR had entered PR and 2 additional patients that had achieved PR entered CR, but 3 patients relapsed (1 from CR and 2 from PR group). Overall, at 12 months, 3 patients achieved CR, 5 achieved PR and 2 had NR (due to relapse). The median 24hr baseline urinary protein declined from 4346 mg (3245 – 7943) to 702 mg (435 – 3057), at 6 months (p=0.001) and 1264 mg (463 – 3645) at 12 months (p = 0.004). There was also significant improvement in serum albumin, hemoglobin, total and LDL cholesterol, and complement 3 levels from baseline to 12 months follow-up (Table 1). Estimated GFR remained unchanged from 61.1 ± 31.9 to 65.0 ± 31.7 at 12 months (p=0.4). In this trial, daratumumab has shown to be safe and well tolerated. Daratumumab was also shown to be effective in reducing the proteinuria dramatically in patients with PGNMID secondary to MGRS along with stabilization of renal function. In conclusion, this is the first clinical trial of daratumumab in patients with MGRS and the promising results deserves further study. 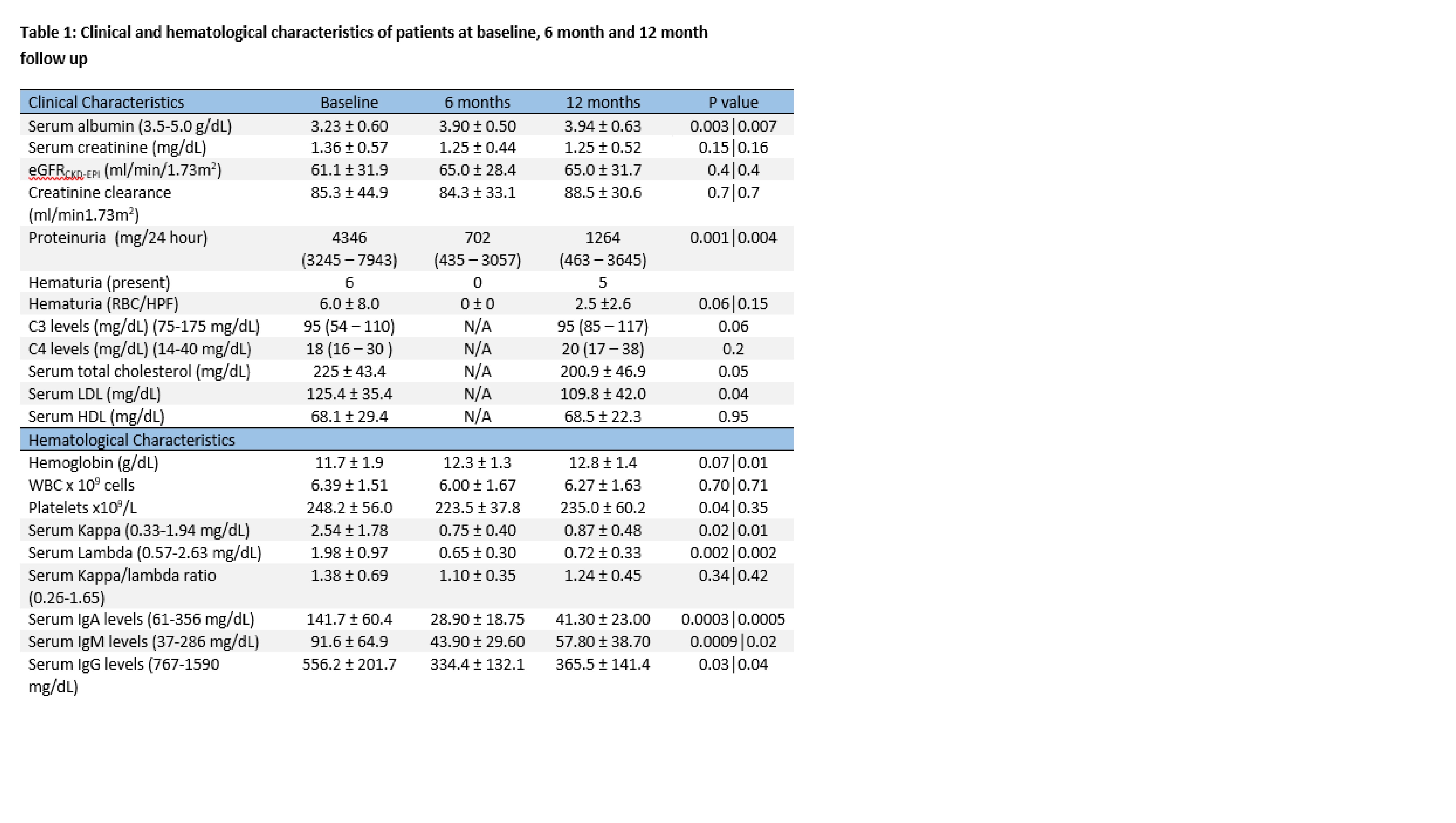 OffLabel Disclosure: Daratumumab - off label use for treatment of PGNMID