Immune thrombocytopenia (ITP) is an autoimmune disorder characterized by platelet (plt) destruction and/or impaired production. Some patients with ITP are refractory or have inadequate responses to existing therapy. In vitro data have demonstrated that the sera of ~50% of patients with ITP can activate the classical complement pathway (CP) and/or fix complement on plt surfaces. We hypothesized that a primary mechanism of thrombocytopenia in a subset of patients with ITP is CP-dependent, and that CP inhibition with sutimlimab (formerly BIVV009), a humanized monoclonal antibody that selectively inhibits activation of the CP by binding to C1s, should improve thrombocytopenia. Interim results on sutimlimab use in patients with chronic ITP were previously reported. Here we present long-term data from a larger group of patients.

Adults with chronic (duration >1 year) severe ITP (plt count ≤30×109/L at screening) with an inadequate response to ≥2 prior therapies were enrolled in an open-label Phase 1 trial. Concomitant ITP medications were allowed if the patient was receiving a stable dose for the last month and unable to sustain plts ≥30×109/L without bleeds. In Part A, patients received sutimlimab on Days 0 and 7, then biweekly for up to 21 weeks, followed by a scheduled 9-week washout to evaluate relapse and eligibility to be re-treated in a long-term extension phase (Part B). Eligibility for Part B included a clinically meaningful response to sutimlimab and no rescue ITP therapy after Dose 2.

Interim results are as of April 9, 2020. Twelve patients (mean [range] age, 45 [27–66] years; 75% [n=9] female) received ≥1 dose of sutimlimab. Median (range) disease duration at screening was 5 (2–36) years and 4 patients had prior splenectomy. Median (range) prior ITP medications was 4 (2–10). Eight patients had insufficient response to rituximab and 9 had insufficient response to thrombopoietin receptor agonists. Seven patients completed Part A including protocol washout (mean [range] washout time, 3 [0–7] weeks) and 4 were removed early due to the need for rescue therapy or unresponsiveness. Six patients enrolled in Part B (mean [range] duration, 55 [8–83] weeks). In Part A, mean (standard deviation [SD]) plt count increased from 25×109/L (16.9) at baseline to 54×109/L (60.2) 24 hours after sutimlimab initiation and to 139×109/L (157.3) at Day 7 (Figure 1). Mean plt count was maintained at >50×109/L in Part A and 5 (42%) patients achieved overall response (plt count ≥50×109/L and >2-fold increase from baseline on 2 consecutive occasions >7 days apart). Median time to first plt count ≥50×109/L was 2 days. Four (33%) patients achieved complete response (plt count ≥100×109/L on 2 consecutive occasions >7 days apart). Five (42%) patients achieved durable response (plt count ≥50×109/L in ≥50% of visits from Week 5 to 21 and did not use rescue ITP therapy after the second dose until Week 21). Plt responses correlated with changes in CP activity (Figure 1), consistent with CP inhibition. Seven patients fulfilled criteria for Part B. In Part B, mean (SD) baseline plt count before re-treatment was 22×109/L (19.2) and increased to 65×109/L (56.6) at Day 4 and to 126×109/L (155.5) at Day 7 (Figure 1). As of April 9, 2020, in Part A, 9 patients experienced a total of 62 treatment-emergent adverse events (TEAE) and 2 patients experienced a total of 3 treatment-emergent serious adverse events (TESAE), of which 1 TESAE (migraine) was assessed as possibly related to sutimlimab by the investigator. In Part B, 6 patients experienced a total of 51 TEAEs and 1 patient with a history of diverticulitis experienced 1 TESAE of diverticulitis assessed as not related to sutimlimab by the investigator. There were no deaths or thromboembolic events during the study, and no discontinuation of study drug due to an AE.

Sutimlimab therapy results in a rapid and durable response in plt count in a subset of patients with chronic ITP who had inadequate responses to multiple prior therapies. The response is sustained after more than 1 year of therapy with an acceptable safety profile. This is continued clinical evidence that the complement pathway plays a role in thrombocytopenia in a subset of patients with ITP. These sustained responses suggest ≥1 additional pathophysiologic explanation for the clinical heterogeneity of ITP and provide a strong platform for continued evaluation of CP inhibition in ITP treatment. 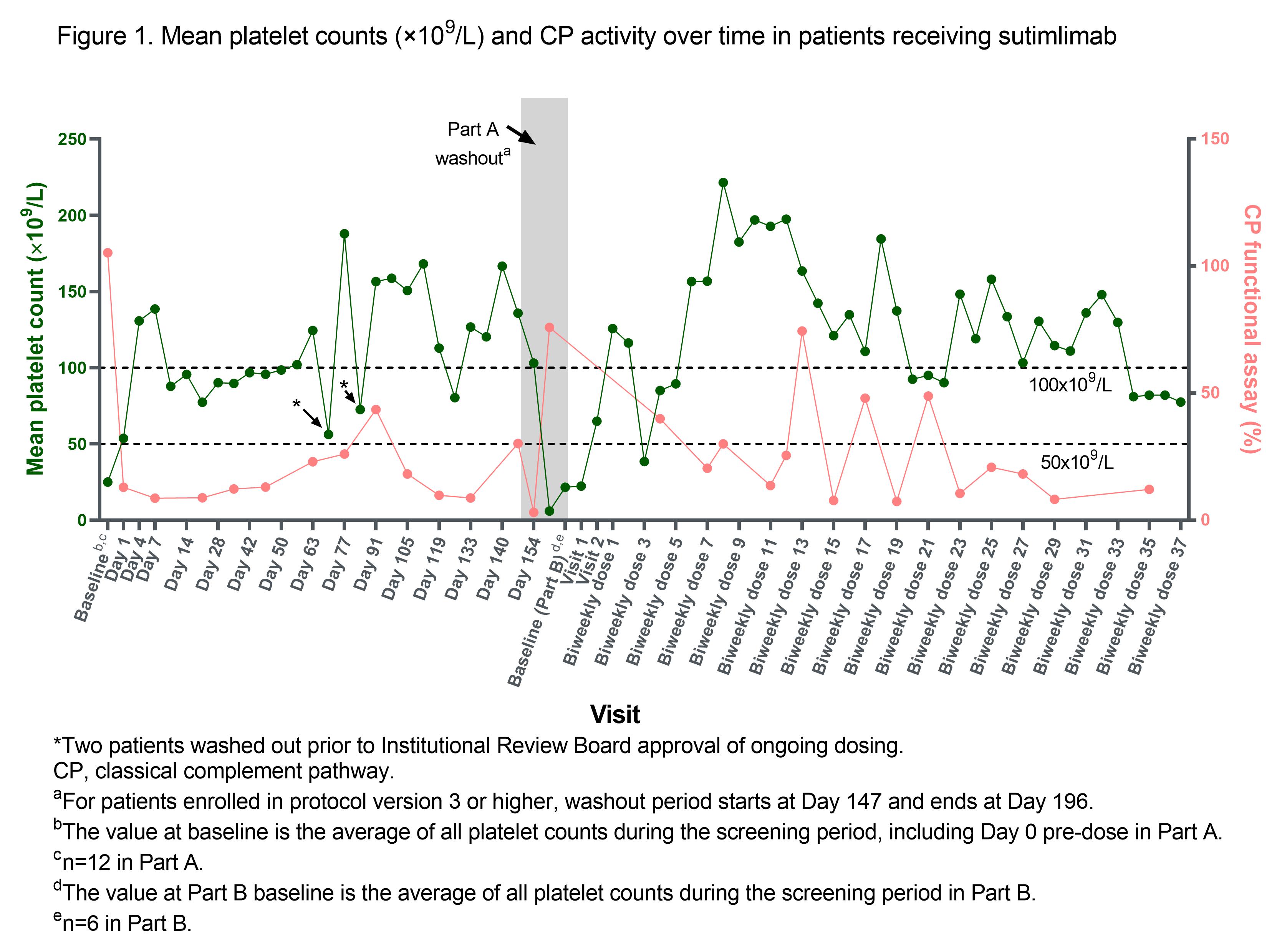