Methods: This open-label phase I/II study evaluated rilzabrutinib in adults with relapsed ITP who had at least two platelet counts <30×109/L in the 14 days prior to the first dose of rilzabrutinib, and included patients who had inadequate response to prior corticosteroids (CS)/thrombopoietin receptor agonists (TPO-RA) but were allowed to continue receiving stable doses of these medications. The primary endpoint was ≥2 consecutive platelet counts of ≥50×109/L and an increase of ≥20×109/L from baseline without requiring rescue medication. Subgroup analyses included assessing the impact of select prior therapies on reaching the primary endpoint, as well as the ability of rilzabrutinib to maintain durable responses and safety in the long-term extension (LTE) period.

Results: As of May 5, 2020, 32 patients initiated treatment with rilzabrutinib 400 mg BID. The median baseline age was 50 years (range, 21-74) and 97% were classified as having primary ITP. Patients had a median baseline platelet count of 13×109/L, had ITP for a median duration of 7.3 y (range, 0.4-52.5), and were heavily pretreated with a median of 6 prior therapies (range, 1-53; 28% prior splenectomy). Median duration of rilzabrutinib 400 mg BID treatment was 18.0 wk (range, 1.4-24.6). Overall, 14/32 patients (44%) achieved the primary endpoint, and responders maintained platelet counts ≥50×109/L for a median of 71% (range, 33%-100%) of weekly counts. Primary endpoint responses were achieved despite prior splenectomy or lack of response to prior ITP therapies (Table). Independent of the primary response, 67% of all patients were able to achieve clinically meaningful benefit of platelet counts ≥30×109/L. Nine patients continued rilzabrutinib 400 mg BID into the LTE period for an additional median of 20 wk (range, 4-36) of treatment. Four of these LTE patients were on rilzabrutinib monotherapy and 5 on rilzabrutinib with concomitant ITP therapy (n=3 corticosteroids, n=2 romiplostim). Baseline characteristics for the 9 LTE patients were a median duration of ITP of 2.6 y (1.2-14.3) and a median of 5 prior therapies (range, 1-8; 1 patient had a prior splenectomy). Platelet counts of ≥50×109/L in the LTE period were maintained for a median of 100% (range, 36%-100%) of weekly counts (Figure). Treatment-related, treatment-emergent adverse events (TEAEs) were all grade 1/2 in patients initiating rilzabrutinib 400 mg BID; 1 patient each experienced grade 1 diarrhea and grade 1 hypophosphatemia in the LTE period.

Conclusions: Oral rilzabrutinib treatment achieved clinically significant platelet responses (≥50×109/L) in patients with heavily pretreated ITP irrespective of splenectomy or lack of response to prior ITP therapy, and maintained responses for the majority of time. In addition, most patients (67%) achieved a clinically meaningful response (platelet counts ≥30×109/L). In patients treated beyond 6 months in the LTE, responses remained consistently reliable (median 100% of weeks). Rilzabrutinib was well tolerated with only grade 1/2 treatment-related TEAEs overall, with only 2 related grade 1 events observed in the LTE period. Continued study is warranted to further demonstrate the magnitude and durability of rilzabrutinib’s clinical benefit. 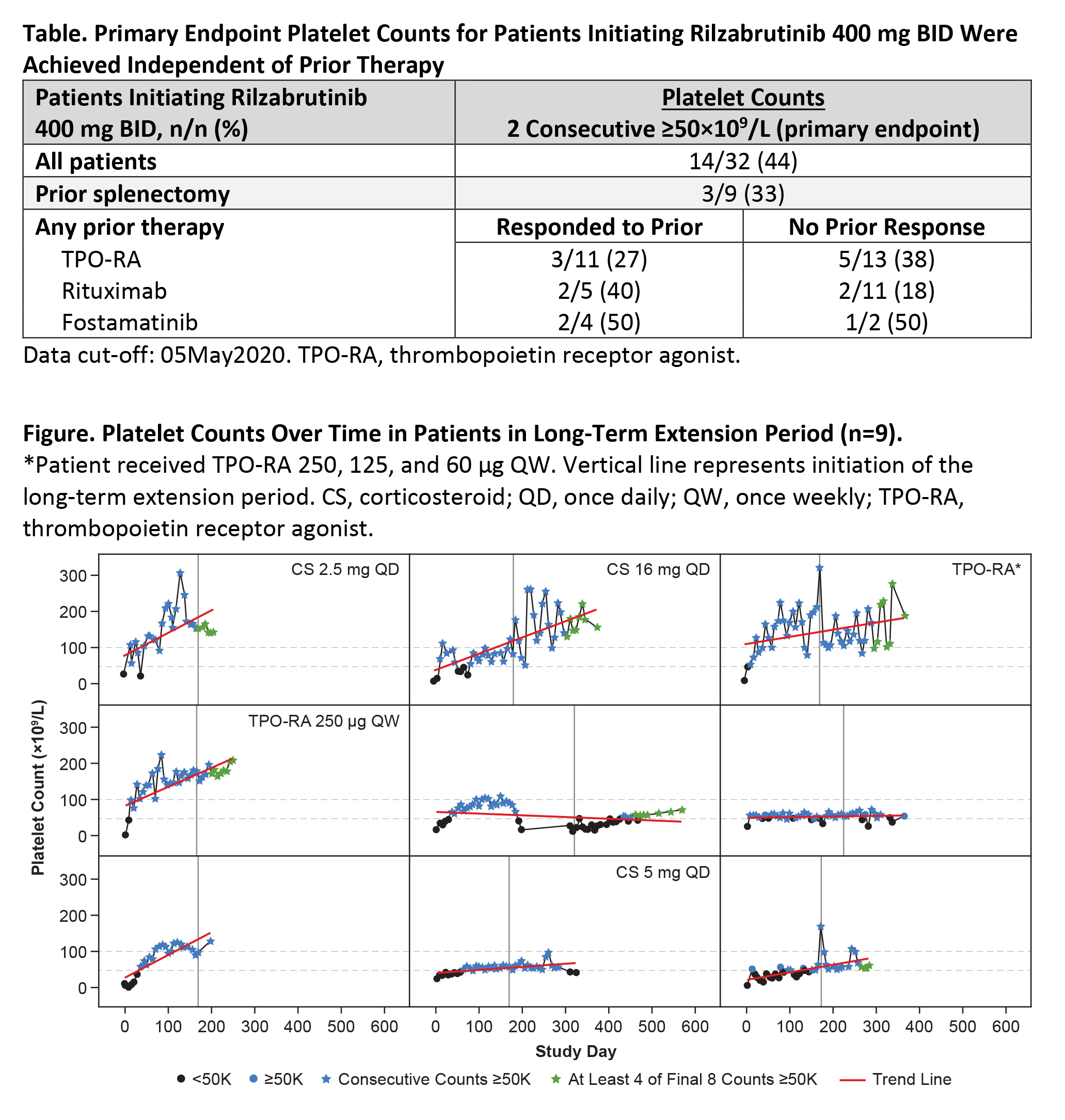 OffLabel Disclosure: Rilzabrutinib is an investigational therapy being evaluated in a clinical study for the treatment of patients with immune thrombocytopenia.