Introduction: BCR-ABL1-directed tyrosine kinase inhibitor (TKI) therapy is the standard of care for patients (pts) with chronic-phase chronic myeloid leukemia (CML). Several TKI agents are available and approved for use in the frontline (1L) setting, specifically imatinib and the second-generation TKIs dasatinib, nilotinib, bosutinib. No prospective study has compared the efficacy of the second-generation TKIs, so the choice of 1L TKI may be tailored to disease risk as well as patient characteristics such as age and comorbidity. As many CML pts are older, they have a greater burden of comorbidities that may be relevant to the initial TKI choice and sequence of additional TKI lines of therapy (LOT). We sought to describe the patterns of TKI use in older CML pts in the United States. We expected imatinib to be the most common 1L TKI for older pts, but that switching to another TKI within 12 months of diagnosis would be common.

Methods: We assembled a population-based cohort of older CML pts diagnosed during 2007-15 and included in the Surveillance, Epidemiology, and End Results (SEER) database who: 1) were age 66-99 years at diagnosis, 2) had continuous Medicare Parts A/B and D coverage from 1 year and 3 months, respectively, before diagnosis to end of follow-up and 3) did not receive a TKI within 3 months before diagnosis. Pts were followed from diagnosis to change in Medicare status, death, or 12/31/2016, whichever came first. We identified 5 available TKIs (imbatinib, bosutinib, dasatinib, nilotinib, and ponatinib) for the treatment of CML from diagnosis to the end of follow-up. A switch from one TKI to another was defined as a new TKI LOT.

Conclusions: We report a large, contemporary analysis of TKI use in older CML pts which showed imatinib to be the preferred 1L TKI with a majority of patients remianing on it after 1 year of treatment. Despite the associated pulmonary toxicity and vaso-occlusive complications of dasatinib and nilotinib, respetively, these TKIs were used in a substantial proportion of older pts with the number of users increasing over time. One-third of 1L TKI users switched to another TKI LOT with one-quarter of pts switching from 1L imatinib eventually returning to imatinib, suggesting that the toxicity of imatinib is likely tolerable among those older CML pts. This work was supported by the Frederick A. DeLuca Foundation. 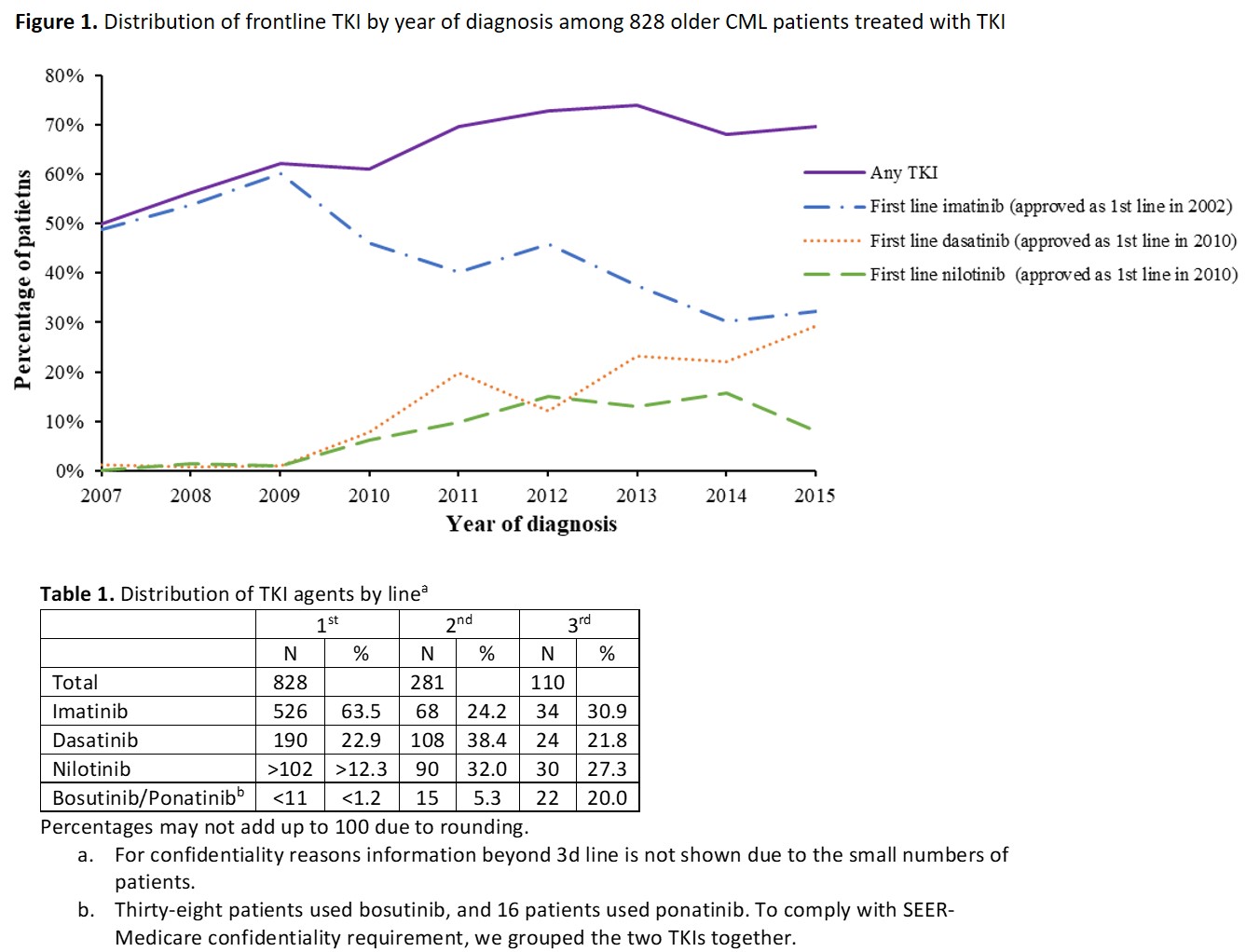