Methods: A retrospective analysis was conducted using the Surveillance, Epidemiology, and End Results (SEER)-Medicare database, comprising Medicare claims (parts A, B, and D from 2007 to 2016) and the US National Cancer Institute’s SEER database (cancer diagnoses from 2007 to 2015). Identified patients had a diagnosis of AML in the SEER registry, were ≥ 65 years at the AML diagnosis date, initiated chemotherapy post-AML diagnosis (i.e. induction), and had an International Classification of Diseases, Ninth/Tenth Revision (ICD-9/10) diagnosis code for AML remission following the start of therapy. Patients were excluded if they had another blood malignancy, had received a prior hematopoietic stem cell transplant, or were enrolled in a clinical trial.

Induction was defined as any therapy received from the date of first post-diagnosis chemotherapy initiation (index date) to the end of the cycle during which a patient had an ICD-9/10 code for AML remission. The 6 months prior to the index date was defined as the baseline period. Post-remission therapy was divided into an early post-remission period, which included any therapy initiated within the first 60 days (≤ 60 d) after end of induction, and a late post-remission period, which included therapy initiated more than 60 days (> 60 d) after end of induction. If specific treatment information was available, late post-remission therapy was defined by a treatment switch occurring > 60 d after end of induction. Post-remission therapy ended at the earliest of relapse or end of follow-up (i.e., death, end of eligibility, or end of available data [December 31, 2016]). The post-relapse period was from the date of first AML relapse ICD-9/10 code after remission to the end of follow-up.

Baseline patient characteristics, as well as HCRU and costs (adjusted to 2019 US dollars) during the baseline, induction, post-remission, and post-relapse periods, were summarized descriptively. HCRU and costs associated with induction and post-remission therapy periods were assessed during days that were part of a treatment cycle. The average per patient per month (PPPM) HCRU and costs were reported. Duration of response (DoR) from the first remission to the earliest of relapse or death was estimated using Kaplan–Meier analysis.

Results: A total of 530 patients were identified. The median age at AML diagnosis was 73 years, 53.6% of patients were male, and 80.6% were white. The median time from index date to the end of follow-up was 13.5 months. Most patients received therapy with hypomethylating agents during the AML treatment. 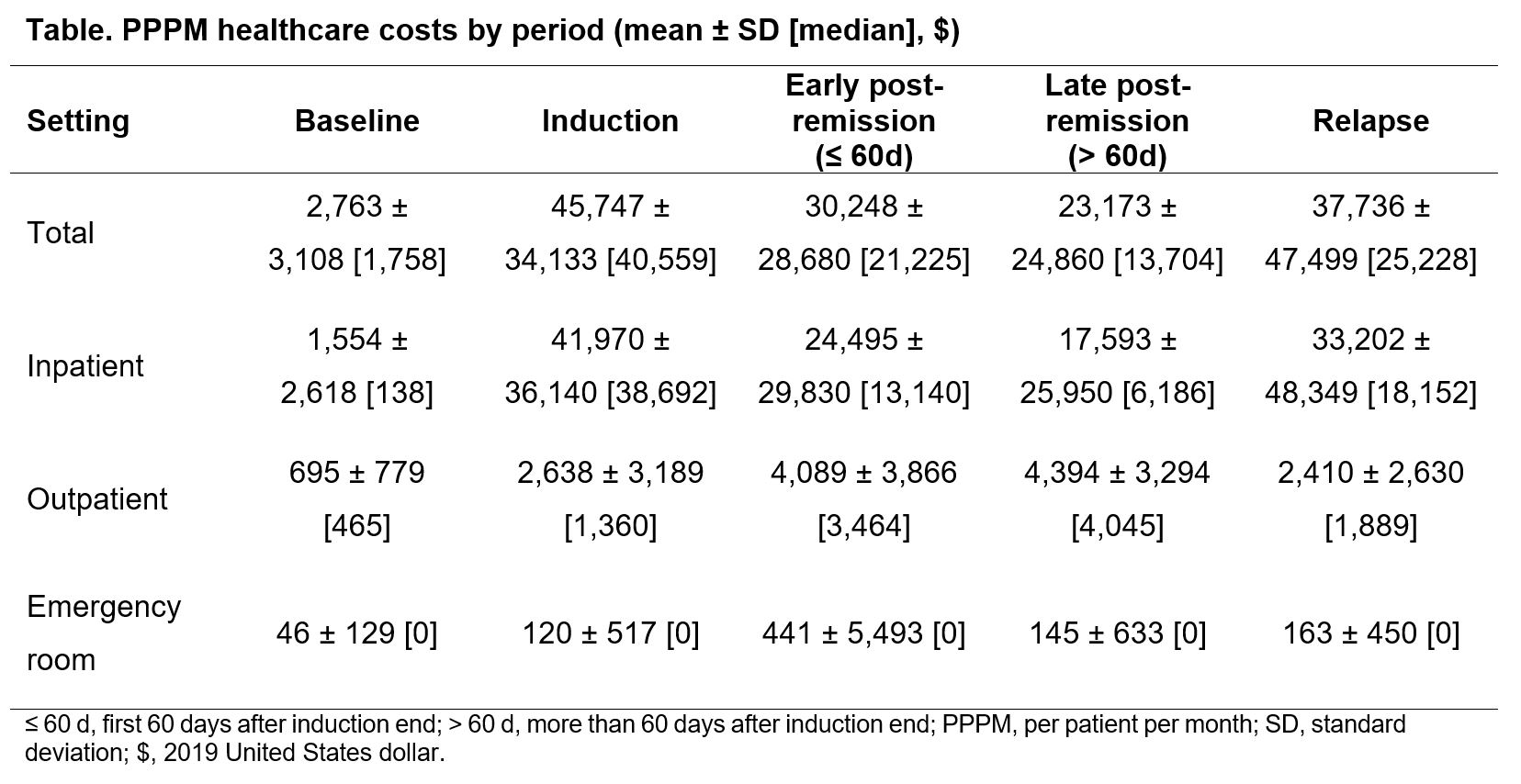