Introduction: Both CD19 CAR T-cells (CD19 CAR) and blinatumomab (blina) effectively induce remission in patients with relapsed/refractory B-cell acute lymphoblastic leukemia (r/r ALL). However, blina use prior to CD19 CAR has raised concerns for increased relapse risk and/or CAR non-response due to selective pressure on CD19. The tisagenlecleucel registration trial in pediatric ALL excluded patients who had received prior blina. Thus, there is limited data regarding the impact of blina on long-term outcomes in patients receiving subsequent CD19 CAR.

Methods: This retrospective, multicenter study was performed to evaluate the impact of pre-CAR blina on subsequent CD19 CAR outcomes in pediatric and young adult patients with r/r ALL < 25 years at diagnosis. The primary objective was to evaluate relapse (RFS) and event free survival (EFS) at 6 months following CD19 CAR stratified by blina use. Secondary objectives included: evaluation of RFS at 12 months and response to CD19 CAR. All patients had their first CAR T-cell infusion between the years 2012-2019 and had at least 30 days of follow-up (or an event prior to 30 days). Descriptive statistics were used for baseline demographics and comparison between cohorts. Kaplan-Meier estimates were used to evaluate survival.

Conclusions: This large, multicenter analysis demonstrate an association with blina use and 1) increased risk of CAR non-response; 2) worse RFS and EFS and 3) a trend towards a higher incidence of pre-CAR CD19 dim disease. While blina non-response did not preclude CD19 CAR response, blina non-responders had lower remission rates to CD19 CAR and a cohort of patients were refractory to both, potentially suggesting resistance to immunotherapeutic CD19 targeting. Additionally, we found that blina may impact CD19 expression, which could subsequently affect response and relapse. Mechanisms of resistance to CD19 CAR include antigen escape or an inherent resistance to T-cell mediated killing. Our data suggest that 1) patients relapsing after or refractory to blina who proceed to CD19 CAR may have an inherent resistance and 2) blina may impact CD19 expression. Ongoing analysis includes detailed analysis of low/dim/partial CD19 expression to delineate the potential impact of blina exposure on leukemic blasts and evaluation of the role of HSCT. 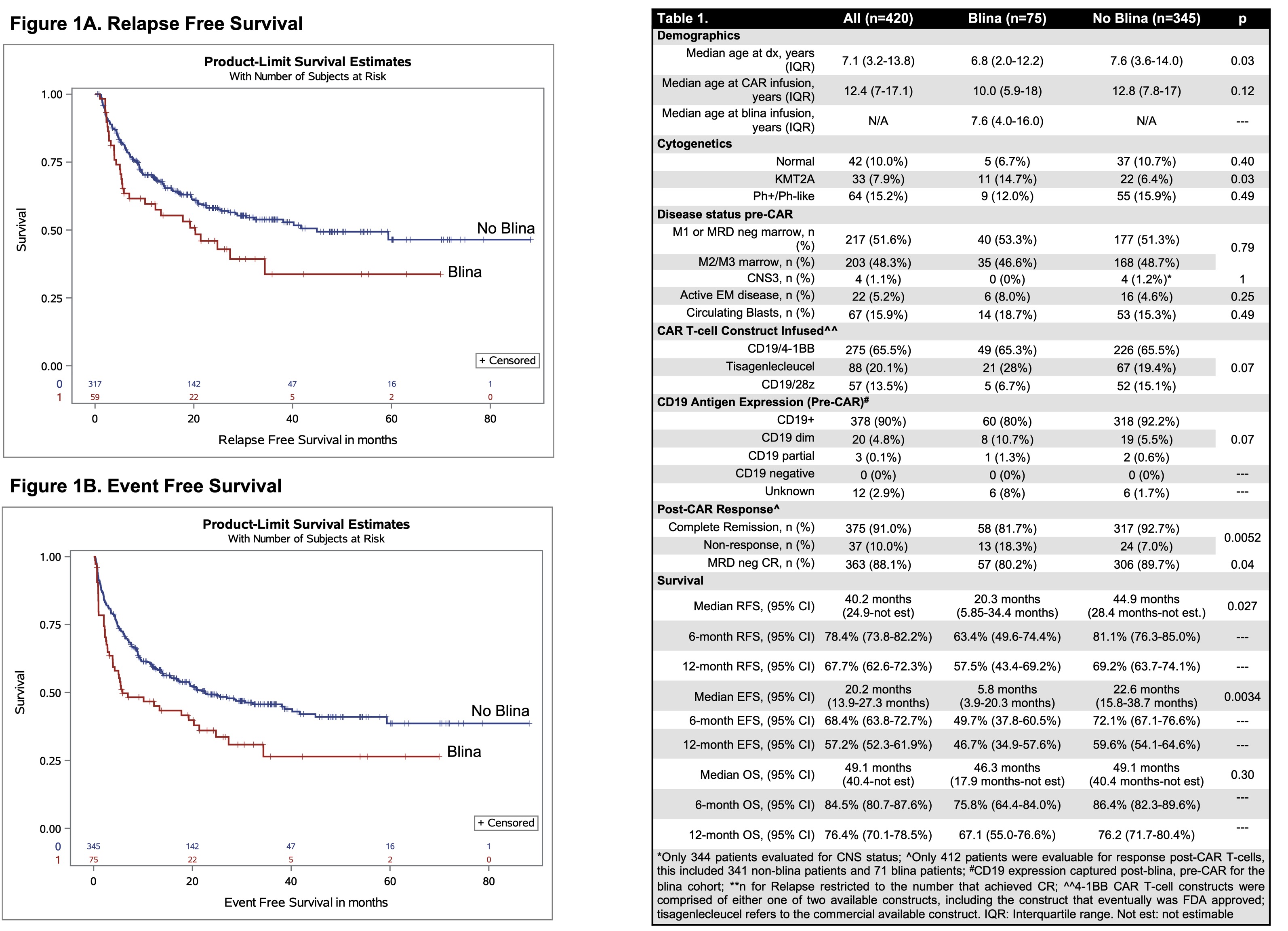