204 Incidence of and Risk Factors for Venous Thromboembolism Among Hospitalized Patients with Cancer and COVID-19: Report from the COVID-19 and Cancer Consortium (CCC19) Registry

Introduction: Hospitalized patients with COVID-19 may have increased risk of venous thromboembolism (VTE) and pulmonary embolism (PE). Cancer and anti-cancer therapies are well-known additional risk factors for VTE. Nonetheless, the VTE risk in patients with both cancer and COVID-19 infection remains unknown as recent studies have not found an association due to sample size limitations. We report the incidence of and risk factors for VTE and PE among hospitalized patients with cancer and COVID-19.

Results: From March 17, 2020 to July 31, 2020, 3914 patients were enrolled in the CCC19 registry. For the present analysis, patients were excluded if they had inadequate follow-up <4 weeks (n=950), were not admitted to the hospital (n=1008), or had unknown VTE outcomes (n=327). Among the 1629 hospitalized patients, the median follow-up was 35 days. Patients were comprised from 3 countries (92% US, 6% Canada, 2% Spain), with a median age of 70, 45% female, and a median comorbidity score of 3. Racial/ethnic breakdown included 44% White, 26% Black, 14% Hispanic, and 13% Other. A past history of VTE was reported in 9% of patients; pre-admission anticoagulant use and antiplatelet use were reported in 25% and 35% of patients, respectively. The most common cancer types included prostate (18%), breast (15%), and lymphoma (14%). Based on the VTE risk grouping adapted from the original Khorana Score, 34% were low-risk, 29% were high-risk, and 6% were very high-risk. The receipt of anti-cancer therapy within 3 months of diagnosis was observed in 39% of patients (17% cytotoxic chemotherapy, 11% targeted therapy, 7% endocrine therapy, and 5% immunotherapy).

The overall incidence of inhospital VTE and PE was 9.3% and 5.2%, respectively. The corresponding estimates were 13.4% and 7.9% among the ICU subgroup. On bivariable analysis, significant predictors of VTE included ICU admission, recent anti-cancer therapy, active cancer status, cancer subtype VTE risk grouping, and pre-admission antiplatelet use (Table 1). Pre-admission anticoagulant use had significant associations with PE but not VTE. Multivariable adjustment is ongoing to identify independent risk factor for VTE and clarify the impact of pre-admission anticoagulant/antiplatelet use controlled for other potential confounders.

Conclusion: In this cohort study of hospitalized patients with cancer and COVID-19, recent anti-cancer therapy, active disease, high-risk VTE cancer subtypes, and ICU admission have increased risk of VTE and PE, while pre-admission anticoagulant/antiplatelet therapy may reduce the risk. This information will aid in developing a risk prediction tool for VTE in hospitalized patients with cancer and COVID-19. 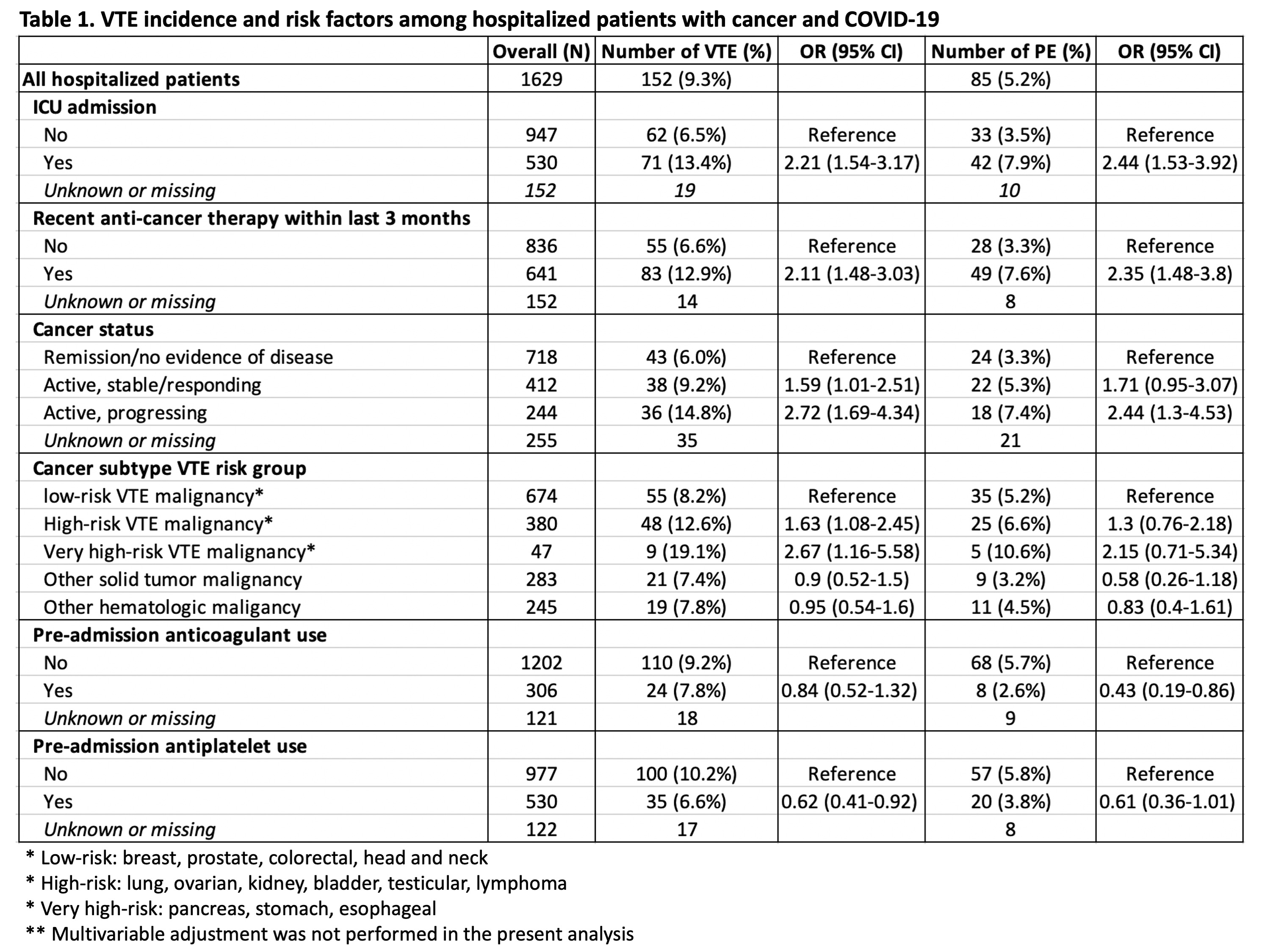