Introduction Despite recent therapeutic progress in this field, the prognosis of elderly patients with Primary (PCNSL) and Secondary Central Nervous System Lymphoma (SCNSL) remains poor, with a median OS of less than two years in most prospective studies. Patients with chemo refractory relapsed PCNSL within the first year from diagnosis have a median OS of 2-4 months. Activated B cell like subtype of Diffuse Large B Cell Lymphoma (DLBCL) and PCNSL relies on a chronically active B-cell receptor (BCR) signaling. Ibrutinib achieves CNS penetrance and has a high overall response rate in CNS lymphomas, but duration of response is short and curative potential is limited. A novel regimen that combines ibrutinib with temozolomide, etoposide, liposomal doxycycline, dexamethasone, and rituximab (Teddi-R) seems to be promising for this population but its tolerance is an issue in patients with advanced age and poor general condition, common features of many PCNSL patients., calling for an alleviated regimen of broader use.

Patients and methods We evaluated a combination of temozolomide and ibrutinib in immunocompetent adult with recurrent/refractory (PCNSL) and (SCNSL) treated in five French centers between June 2015 and January 2020. The treatment consisted of 560 mg ibrutinib orally once daily (28-day cycles) and temozolomide 100 mg/m2 or 150 mg/m2 orally day 1 to 5 for cycle 1, increased to 200mg/m2 day 1 to 5 from cycle 2, until disease progression or unacceptable toxicity occurred. The evaluations were performed using Magnetic resonance imaging (MRI) and the responses were assessed according to the International PCNSL Collaborative Group Response Criteria. The lymphoma diagnoses were all confirmed by expert pathologists in the framework of the national program “lymphopath”, based on the criteria of the World Health Organization 2008 classification.

Results 22 immunocompetent adults with recurrent/refractory (PCNSL n=13) and (SCNSL n=9) were evaluable for safety and efficacy.

Median age was 71 years (range, 44 - 89 years). All patients had relapsed (n=6) or refractory (n=16) disease, after a median of two lines of therapy (range, 1-3). Overall, 18 patients (82%) and 14 (64%) patients had previously received high dose methotrexate or both high dose methotrexate with high dose cytarabine, respectively. Among the four patients who did not receive Methotrexate, one had a chronic kidney disease secondary to diabetic nephropathy and experienced major toxicity after cytarabine infusion. The three others (72, 79 and 89 years old) were SCNSL experiencing comorbidities and toxicities from their previous treatment lines. Ten patients had a poor performance status according to Eastern Cooperative Oncology Group [ECOG] ⩾ 2.

Twelve patients (55%) stopped treatment due to progressive disease. Three (14%) patients stopped treatment for toxicity: Two (9%) due to grade 2 atrial fibrillation and one patient after 18 months in RC due to grade 1 muscle cramps, which did not stop after treatment discontinuation. three (14%) patients stopped temozolomide only due to recurrent grade 2 microcrystalline arthritis, grade 3 fall and one patient after 15 months in RC due to recurrent grade 2 bronchial infection, asthenia and nausea. Two patients temporary stopped treatment for grade 1 tumor hemorrhage and grade 3 tumor hemorrhage with grade 3 seizure. Micro-bleedings were seen at the MRI in four patients. Four patients (18%) experienced serious infectious complications including: two grade 3 febrile neutropenia, one grade 3 urinary tract infection and one grade 3 sepsis. None of the patients developed aspergillosis during the follow-up. 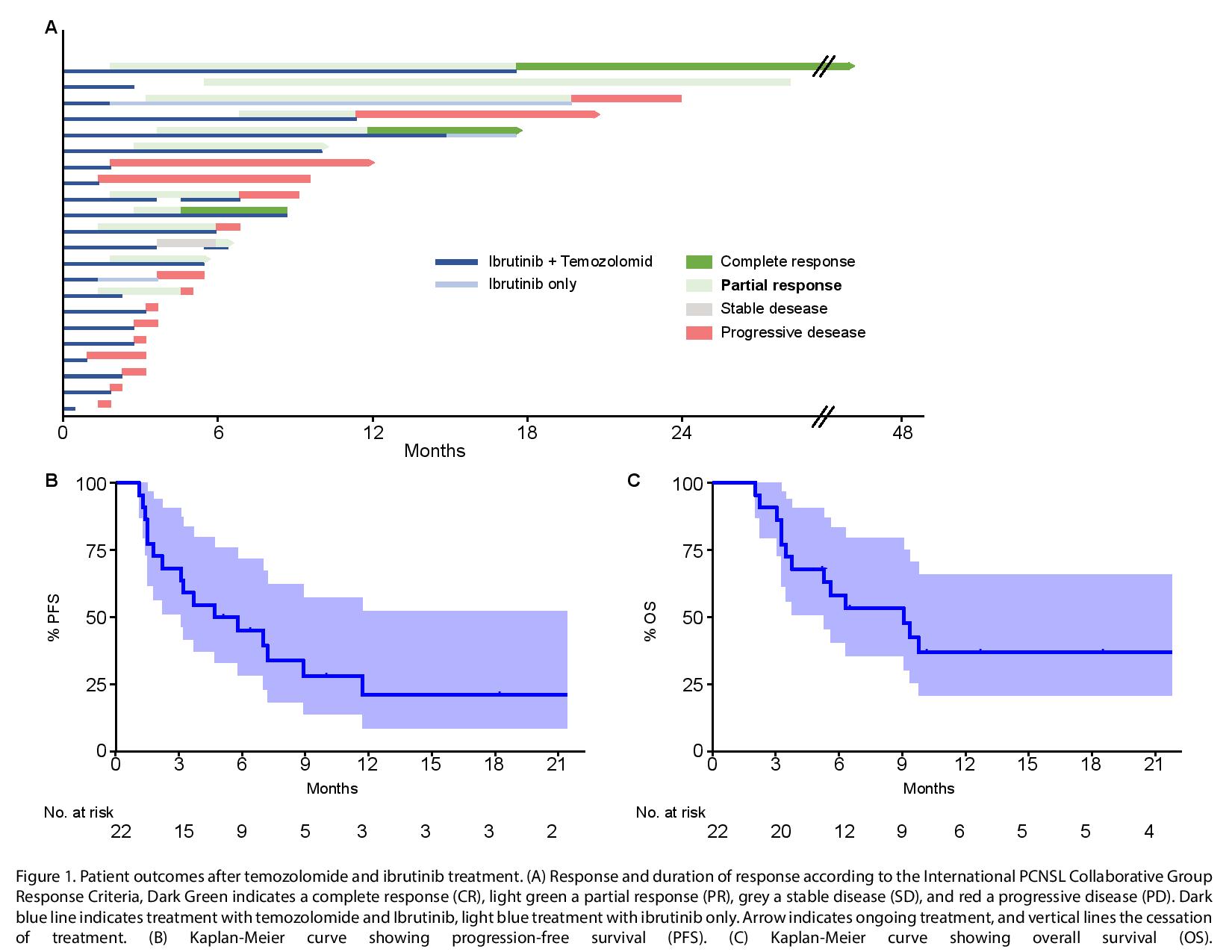