Chimeric antigen receptor T-cell (CAR-T) therapy has emerged as a powerful therapy for relapsed and refractory (R/R) B-cell malignancies. A growing body of research suggests that CAR-T therapy can be safe and effective in patients who have previously received allogeneic hematopoietic stem cell transplantation (alloHSCT). “Pseudo-allogeneic” CAR-T therapy refers to manufacture of engineered T-cells collected from an alloHSCT recipient exhibiting 100% donor chimerism. This CAR-T approach poses theoretical risks due to alloreactivity and increased CAR-T toxicity. Most studies to date in this area have enrolled patients with leukemia. We present here a single-center experience with pseudo-allogeneic CAR-T following alloHSCT in 6 patients with large B-cell lymphoma (LBCL).

Patients with R/R LBCL who underwent treatment with axicabtagene ciloleucel (axi-cel) CAR-T after prior alloHSCT were identified. All patients underwent lymphodepletion with cyclophosphamide and fludarabine prior to CAR-T infusion. CAR-T toxicities, namely cytokine release syndrome (CRS) and immune effector-cell associated neurotoxicity syndrome (ICANS) were graded in accordance with the 2019 American Society for Transplantation and Cellular Therapy (ASTCT) consensus grading.

Six patients who underwent axi-cel CAR-T due to post-alloHSCT R/R LBCL were identified. All patients had stage ≥II disease. At the time of CAR-T apheresis, all patients had ≥95% donor chimerism and were off immunosuppression, without evidence of GVHD. Manufacturing failure occurred in only one patient (case 2) due to low viability and upon second apheresis, manufacture was successful. All 6 pseudo-allogeneic CAR-T therapy patients tolerated infusion and did not show increased incidence or severity of CRS or ICANS compared to our center’s experience with standard CAR-T patients, with only one patient experiencing greater than grade 2 toxicity. Three of six patients developed graft-versus-host disease (GVHD); however, one case was in the setting of PD-1 blockade and two were isolated cutaneous manifestations. There was no incidence of severe GVHD. All three cases of GVHD underwent CAR-T within ten months after alloHSCT, whereas the three patients without GVHD were >1 year post-HSCT at time of CAR-T. Two cases who had donor lymphocyte infusions prior to CAR-T did not develop GVHD. In terms of efficacy, three patients achieved a complete remission. There was no perceptible relationship between the development of GVHD and the response to CAR-T. Four of six had cytopenias at day 30 after CAR-T, with only two exhibiting persistent cytopenias at day 90. Lastly, in this small sample size, no differences were seen in incidence of GVHD or treatment response between haploidentical, matched-related, and matched-unrelated alloHSCT donors.

In our experience, pseudo-allogeneic CAR-T therapy following alloHSCT appears to be a safe and well-tolerated treatment modality for R/R B-cell lymphoma. The efficacy of this modality will need to be borne out in further studies. 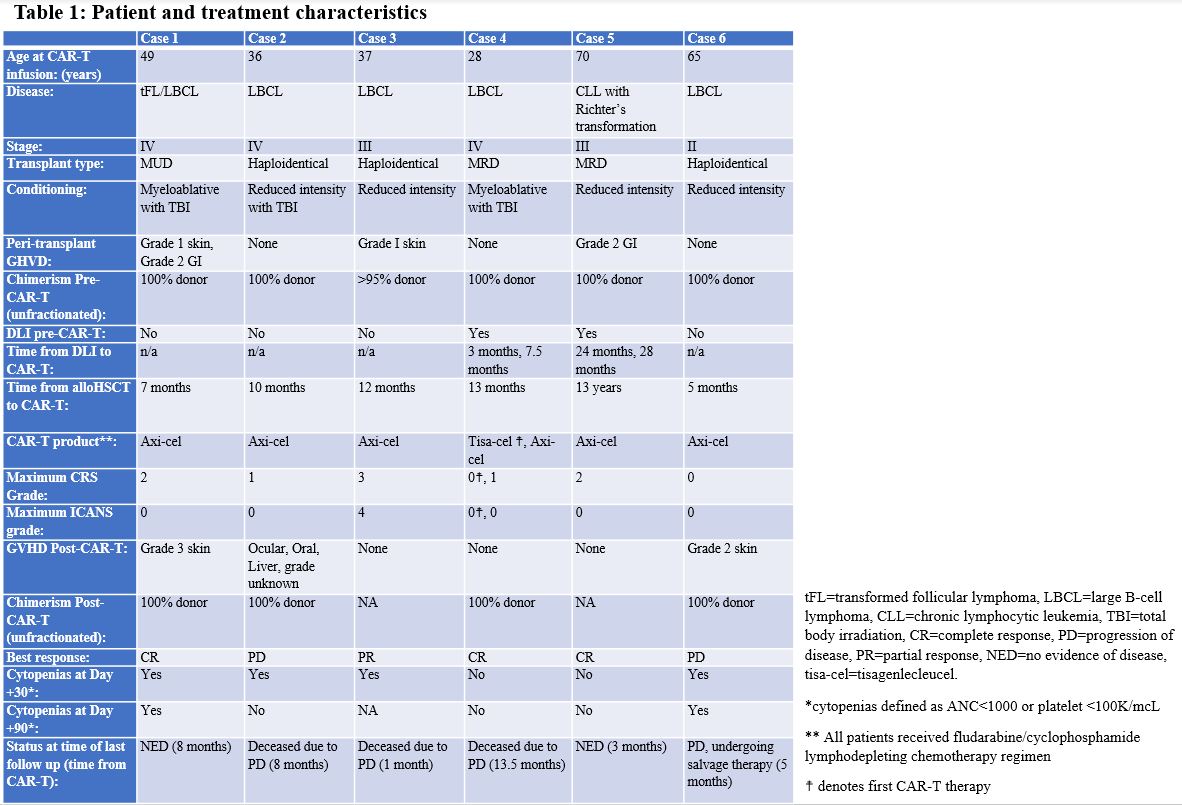