Immune thrombotic thrombocytopenic purpura (iTTP) is a potentially lethal thrombotic microangiopathy; however, prompt therapy with plasma exchange and immunosuppression leads to survival in over 90% of patients. Though TTP survivors were previously thought to return to baseline levels of health, recent reports suggest that TTP survivors have high rates of adverse health sequelae including hypertension, stroke, cognitive impairment, and poor quality of life as well as higher mortality rates compared with an age, race, and sex matched controls population. We conducted this multi-center cohort study to evaluate long term mortality and causes of death in patients that survived their first TTP episode.

All available patients in The Ohio State University and Johns Hopkins Hospital Thrombotic Microangiopathy (TMA) registries were reviewed. Patients with confirmed iTTP based on ADAMTS13 activity <10% during an acute episode were included for analysis. A total of 238 patients met inclusion criteria, with 38 experiencing death during follow up. We evaluated primary and secondary cause of death where applicable. We also collected data on patient demographics, details of TTP history, and comorbidities including hypertension, diabetes, obesity, heart failure, hyperlipidemia, autoimmune conditions, chronic kidney disease, smoking, etc. Mortality was compared with an age, sex and race standardized US population using indirect standardization methods. A multivariable cox regression analysis was used to evaluate risk factors for reduced survival.

A total of 222 patients were enrolled in the Ohio State University and Johns Hopkins TTP registries between 2003 and 2020, of which 70.3% were female, and median age at enrollment was 42 (IQR [interquartile range] 29, 55) years. There were 38 deaths over a median follow up of 4 (IQR 0, 11) years (and a total of 1318 patient years of follow up). Characteristics of the study cohort are summarized in Table 1.

The mortality rate in TTP survivors was significantly higher than the expected mortality rate from an age and sex standardized reference US population (2228.3 per 100,000 person years versus 1273.8 per 100,000 person years, P = 0.007) (Figure 1). The median age at death was also lower in TTP survivors compared with the general population (49 versus 78.7 years). 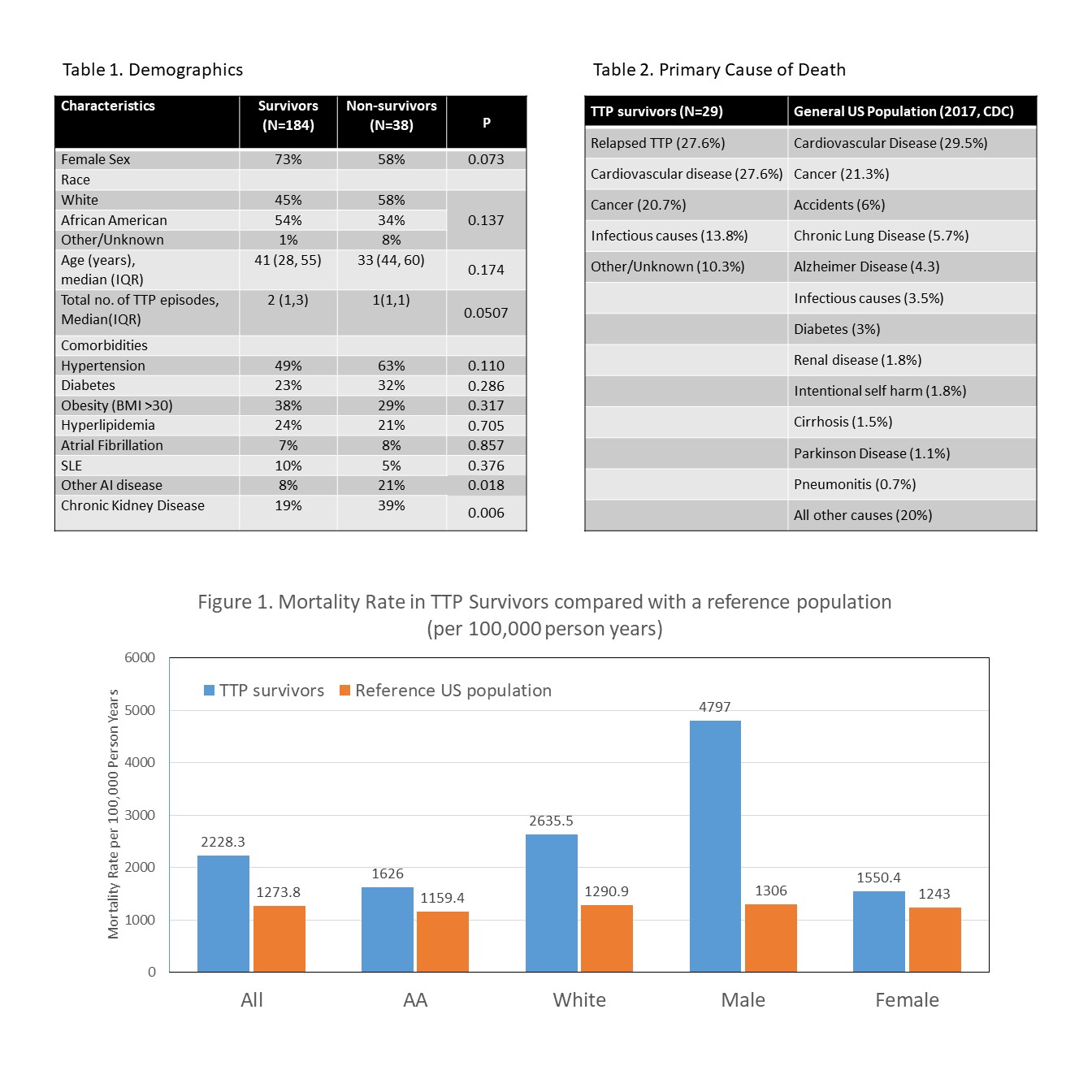