2593 Efficacy and Safety of Amlodipine in Preventing Myocardial Iron Overload in Patients with Transfusion-Dependent Thalassemia Major : A Systematic Review and Meta-Analysis

Patients diagnosed with thalassemia major who are transfusion dependant, have iron accumulation leading to iron toxicity and severe impairment in organs like heart, liver and endocrine organs which are highly sensitive to iron toxicity. This makes iron chelation therapy imperative for these patients. Half of the deaths resulting from iron toxicity related complications are attributed to cardiac complications. Iron chelation therapies have not been completely successful to prevent iron toxicity related complications like arrhythmia, cardiomyopathy and heart failure. Higher doses of iron chelation therapies have been associated with various side effects. Studies have shown L-type calcium channel blocker might be able to reduce iron uptake by myocardium. The aim of this meta-analysis is to assess the efficacy and safety of amlodipine to reduce myocardial iron concentration (MIC).

In six RCT, 96 patients were tested in experimental group and 97 in control group. In five RCT total number of male participants were 45 in experimental group and 54 in control group. 33 patients had splenectomy in experimental group and 41 in control group. The age range was 8 years to 31 years. The myocardial T2 score increased in amlodipine group compared to standard chelation group with significant mean difference estimated to be -0.62 (95% CI: -0.95—0.29, p-value: <0.001) in favor of amlodipine in meta-analysis of the four trials (Fig 1.). Statistically significant reduction in myocardial iron was seen in two trials on adding amlodipine to standard chelation therapy (N=55) (Table 1.) (Khaled et al and Fernandes et al). Significant difference was reported in liver T2 score and LIC at the end of six months between amlodipine and control group by Khaled et al. But, there was no statistically significant mean difference in serum ferritin and in liver MRI T2 between amlodipine group and control group with mean difference of -1143 (95% CI: -2410 to 124, p-value = 0.07) and -0.06 (95% CI: -0.463 to 0.338, p-value = 0.76) in meta-analysis of four and two trials respectively (Fig 2. And Fig 3.). El-Haggar et al compared amlodipine with spirulina and statistically significant improvement in myocardial T2 and NT-proBNP level was seen in both groups. Spirulina group also showed significant reduction in serum ferritin, which showed spirulina could also help reduce iron overload. Only mild adverse effects were reported by trials (Table 2.). No cases of severe hypotension, palpitation or any other serious adverse effects were seen in the amlodipine group.

This systematic review and meta-analysis suggests that addition of amlodipine 2.5-5 mg/day to standard chelation therapy with monitoring for potential adverse effects, could benefit patients with thalassemia major by reducing cardiac iron overload and thus improve survival and quality of life. Future studies are required to study the role of amlodipine in reducing iron overload in endocrine organs that also absorb iron through voltage-gated channels, particularly considering the close association of cardiac siderosis with endocrine complications and the correlation of pancreas and MICs. 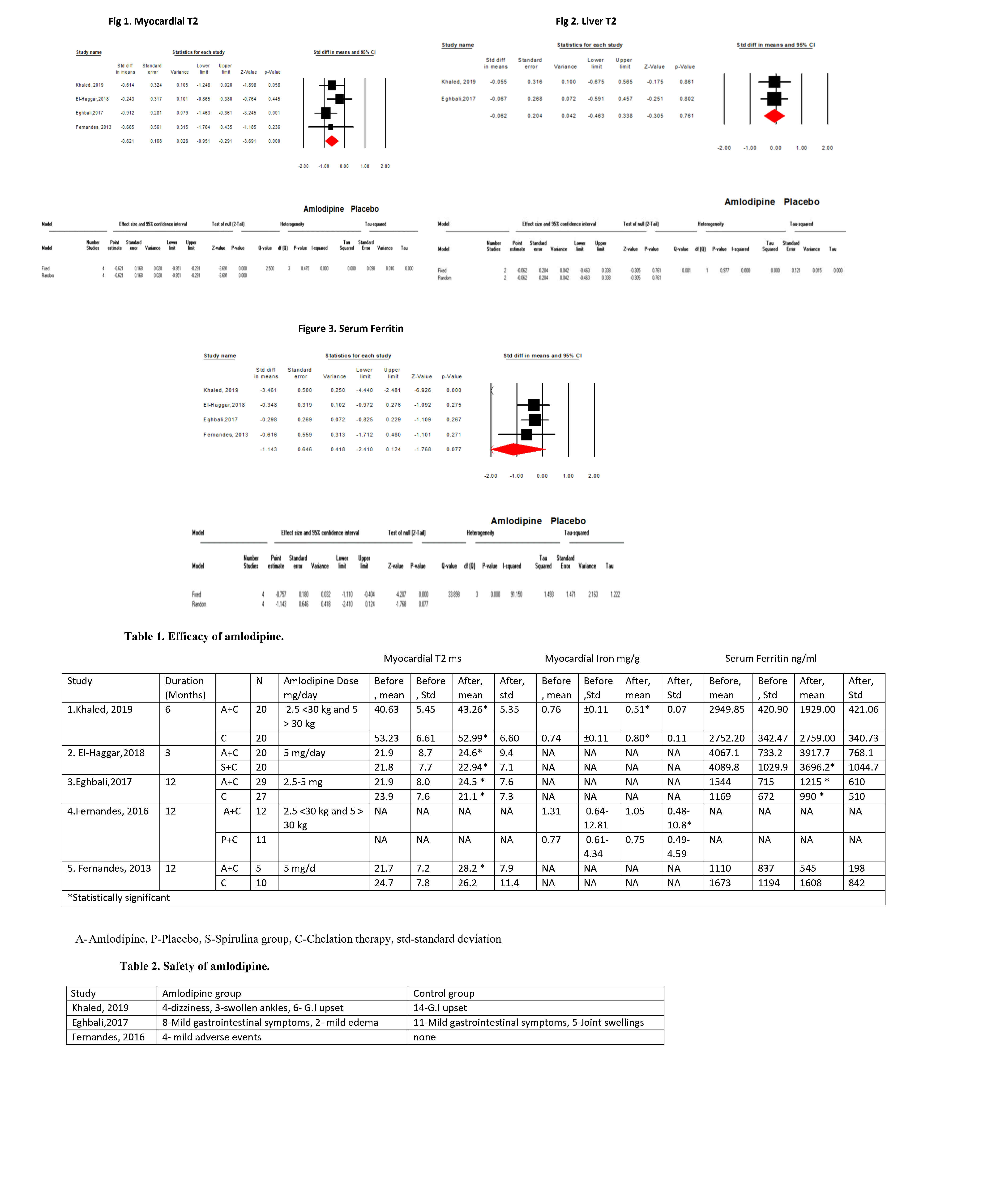