Introduction. Sickle cell disease (SCD) is caused by hemoglobin S polymerization leading to vaso-occlusion, small vessel disease, and reduced tissue oxygen saturation. Noninvasive assessments and screening of small vessel disease and decreased oxygen saturation in select organs, like the brain, are poorly developed. Cerebral autoregulation, a mechanism that ensures cerebral blood flow (CBF) remains constant with changes in mean arterial pressure, is impaired with and is a marker of small vessel disease. Frequency-domain near-infrared spectroscopy (FD-NIRS) can be used as a noninvasive technique to measure cerebral autoregulation by recording cerebral microvascular changes in hemoglobin concentration that are related to cerebral blood flow. Transfer function analysis is a method to noninvasively quantify the relationship between measured physiologic signals, and can be used to estimate cerebral autoregulation. In this study, we hypothesized patients with SCD have impaired cerebral autoregulation and reduced tissue oxygen saturation, which we evaluated via FD-NIRS with transfer function analysis, as compared to healthy controls.

Methods. All patients provided informed consent under an IRB protocol approved by the University of Pittsburgh and Carnegie Mellon University. Patients with SCD (n = 11) and healthy, race-matched controls (n =14) were enrolled. All participants sat upright in a chair with probes of a commercial multi-distance FD-NIRS apparatus applied to their forehead in a dark room (Fig. 1A). We used paced breathing to dynamically induce controlled changes in the microvascular tone at 0.1, 0.125, and 0.1667 Hz, spanning normal to more challenging breathing rates, with a visual metronome guiding each paced breathing session (Fig.1.B). To validate each breathing pace, we recorded the participants’ respiratory rate via a belt placed around their chest, and their mean arterial pressure through a finger and arm cuff attached to a beat-to-beat finger plethysmographer (Fig.1.A). We used the modified Beer-Lambert law to calculate changes in oxy-hemoglobin (O), deoxy-hemoglobin (D), and total hemoglobin (T) concentrations. Data was bandpass-filtered around the paced breathing frequencies, and the Hilbert transform was applied to calculate the amplitude ratios, |D|/|O|, and phase latency, Arg(D)−Arg(O). The tissue oxygen saturation of hemoglobin, StO2 (mean ±SD), was computed based on an average baseline of two minutes.

Results. Arg(D)−Arg(O) and |D|/|O| are shown for controls and patients at all paced breathing frequencies (Fig.1C-D) from the largest source-detector distance. A non-zero phase lag between D and O within both groups indicates influences of cerebral blood volume (CBV) and CBF changes. The phase differences of D and O are therefore related to cerebral autoregulation. We found a greater phase difference (mean range: -320° to -340°) in patients with SCD compared to controls (mean range: -200° to -240°), indicating the presence of vascular obstruction and impaired cerebral autoregulation. Higher amplitude ratios |D|/|O| may indicate slower blood transmit times. We found that patients with SCD had increased amplitude ratios for hemodynamic oscillations at lower paced breathing frequencies compared to healthy controls (Fig. 1D). Finally, we found a significantly reduced cerebral tissue oxygen saturation in patients with SCD (63.1 % ± 7.8 %) in comparison with controls (65.9 % ± 4.9 %, p<0.05, Fig.1E).

Discussion. We provide preliminary evidence that FD-NIRS can be used to assess cerebral autoregulation in SCD. Our results confirm and extend those of a prior study by Reinhard et al, 2003, by using the phase latency, Arg(D)−Arg(O), and the amplitude ratios, |D|/|O|, to assess autoregulation. In addition, we detected a noticeable reduction in oxygen saturation in patients with SCD as compared to healthy controls. Further studies may extend our findings to additional frequencies in a larger sample size to more comprehensively assess the impact of mean arterial pressure on autoregulation. Noninvasive measurement of cerebral autoregulation and brain oxygenation in SCD by FD-NIRS may represent a novel biomarker of cerebral vasculopathy in SCD and may help monitor changes in cerebral oxygenation, particularly during treatment with drugs that modulate the hemoglobin oxygen affinity, such as the recently FDA-approved voxelotor. 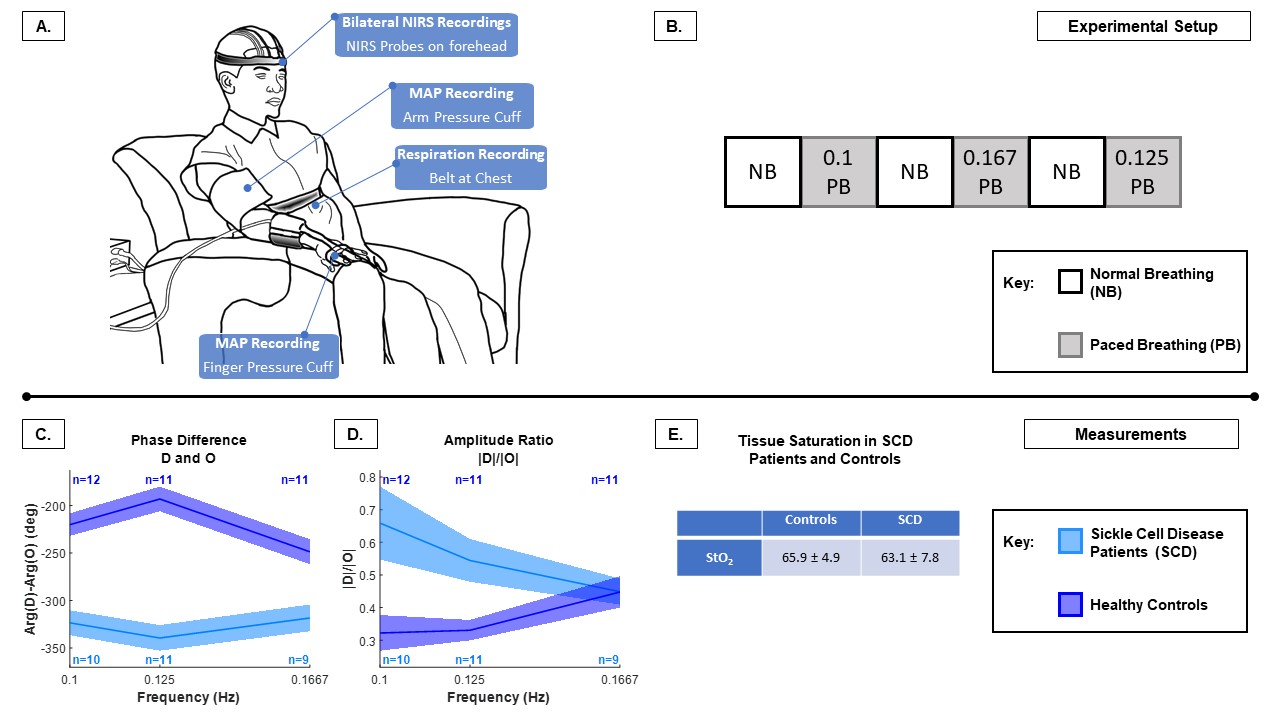