Background: Adolescent and young adult (AYA) patients (pts) with acute lymphoblastic leukemia (ALL) have superior outcomes when treated on pediatric regimens. These regimens, which rely heavily on corticosteroids and asparaginase (asp), are known to increase the risk of osteonecrosis (ON). In children older than 10 years (yrs), reported rates of symptomatic ON range from 5-25% (Mattano JCO 2000, Mattano Lancet Onc 2012, Toft Eur J Haematol 2016, Larsen JCO 2016). In adults, the frequency of ON and fractures (fx) are not well described including among those treated on pediatric regimens. In the recently reported C10403 trial (Stock Blood 2019), a 4% rate of ON was reported among patients aged 17-39 yrs. Here, we describe the orthopedic toxicities of AYA pts treated on sequential Dana-Farber Cancer Institute (DFCI) ALL Consortium protocols.

Methods: Pts aged 1-50 yrs were treated on four sequential multi-center DFCI ALL Consortium protocols between 2000 and 2018. Additional pts treated as per these protocols at DFCI, Massachusetts General Hospital (MGH), and Boston Children’s Hospital (BCH) were identified by chart review. Earlier pts were enrolled on parallel Pediatric 00-001 (2000-2004) and Adult 01-175 (2002-2008) trials while later pts were enrolled on parallel Pediatric 05-001 (2005-2011) and Adult 06-254 (2007-2011) trials. Protocol 00-001 randomized pts between dexamethasone (dex) and prednisone (pred) during consolidation, while the other three trials used dex (all trials used pred during induction). Both 00-001 and 01-175 used native E.Coli asp, while later protocols (05-001, 06-254) used PEG asp for some (05-001, randomized) or all (06-254) pts. All pts were intended to receive 30 weeks of asp during consolidation. Pts aged 15-50 yrs were included in this study. Orthopedic toxicities were extracted from case report forms for trial pts and by chart review for those not on trial. Additional chart review was performed on all pts treated at DFCI, MGH, and BCH to identify surgical events. All pts were combined in the modeling based on the treatment backbone. The 5-yr cumulative incidences (CIs) of ON and fx were estimated and compared using the Gray test. Univariate and multivariable competing risk regression models were constructed with death as a competing risk.

Conclusions: In a large cohort of AYA ALL pts aged 15-50 yrs treated on a pediatric regimen, orthopedic toxicities were common (17% for ON, 12% for fx at 5 yrs). Younger pts (< 30 yrs) experienced higher rates of ON, as well as pts treated on later-generation PEG-asp protocols which combined dex and PEG asp. Increased rates of orthopedic toxicity in later generation protocols may be driven by the pharmacokinetic drug interaction between PEG asp and dex, leading to higher dex exposure (Yan JCO 2008, Panetta Clin Pharmacol Ther 2009). Increased awareness may be useful in early identification of orthopedic toxicities. Future efforts should focus on further understanding the pathophysiology and risk factors for orthopedic toxicity in ALL AYA regimens and developing prophylactic interventions. 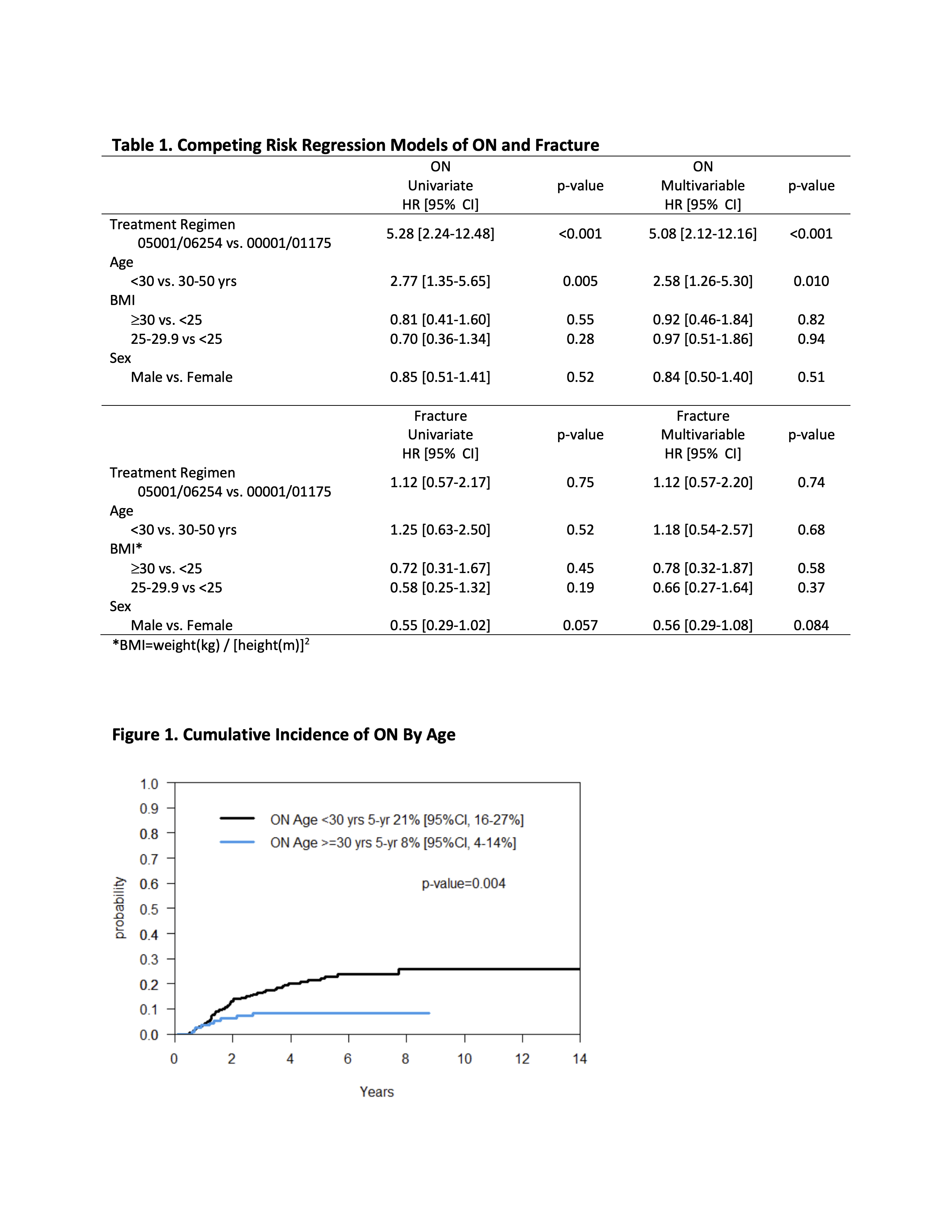