Acute myeloid leukemia is caused by the accumulation of mutations in hematopoietic stem and myeloid progenitor cells, resulting in increased self-renewal, inhibition of differentiation, and aberrant proliferation. Although genomic studies have comprehensively identified genes that are mutated in acute leukemias, the functional roles of many of them, and the consequences of their mutations, remain poorly understood. PHF6 (PHD-finger protein 6) is an X-linked gene that is mutated in 3.2% of de novo AML, 4.7% CMML, 3% MDS, and 1.6% CML patients. Two-thirds of somatic mutations in PHF6 are frameshift and nonsense mutations distributed throughout the gene body, resulting in loss of PHF6 protein. One-third of the mutations are point mutations clustered in the ePHD2 (extended PHD) domain, and the consequence of these mutations on PHF6 function is unknown. The functional role of PHF6 and the mechanism by which PHF6 mutations accelerate AML has not yet been determined. In this study, we delineate the cellular and molecular function of PHF6 in AML using in vitro and in vivo models.

In agreement with recently published reports, we found that pan-hematopoietic deletion of Phf6 using the Vav-Cre recombinase system gave competitive transplantation advantage to HSCs, with sustained multi-lineage reconstitution without exhaustion over three rounds of serial transplantations, demonstrating that Phf6 represses HSC self-renewal. However, loss of Phf6 alone was insufficient to cause hematopoietic malignancy in the mouse model when monitored for one year. To determine the function of PHF6 in AML progression, we transduced cKO (Vav-Cre; Phf6 flox) or WT (Vav-Cre only) bone marrow cells with MSCV retrovirus expressing HOXA9 (WT+HOXA9 and cKO+HOXA9), and transplanted into irradiated recipient mice. The resulting HOXA9-driven AML was greatly accelerated in the Phf6 cKO background, with recipient mice succumbing faster (median survival 119 days) as compared to recipients transduced with HOXA9-transduced WT cells (median survival >180 days, p=0.003) (Fig 1A). This was also reflected by an increase in the number of circulating immature leukemic cells in peripheral blood at earlier timepoints. HOXA9-transduced cKO cells showed higher serial replating ability in an in vitro colony forming assay as compared with HOXA9-transduced WT cells (Fig 1B).

We further investigated the molecular function of PHF6 using the THP-1 human AML cell line. PHF6 is a chromatin-binding protein with two ePHD domains, and its binding partners and pattern of chromatin occupancy are unclear. Using ChIP-Seq, we identified that PHF6 occupies enhancers, and its peaks show striking alignment with the peaks of the key myeloid transcription factors (TFs) RUNX1, PU.1, and IRF8 (Fig 1C). To assess the effect of the clinically relevant point mutation R274Q (in the ePHD2 domain) on the transcriptional effects produced by PHF6, we first generated a PHF6 KO clone from the THP-1 cell line, and then re-expressed either WT PHF6 or R274Q-mutant PHF6 in this KO line. Re-expression of WT PHF6 rescued the extensive gene expression changes produced by its knockout, but R274Q-mutant PHF6 was unable to produce any gene expression changes, indicating that it is a "transcriptionally dead" mutant (Fig 1D). Gene Ontology analysis of transcriptome changes induced by WT PHF6 showed that PHF6 promotes the expression of myeloid differentiation gene sets.

In summary, PHF6 restricts AML progression by binding enhancers with key myeloid TFs, and promoting the expression of myeloid differentiation genes. R274Q mutation renders PHF6 unable to exert any downstream expression changes, indicating that the ePHD2 domain (where R274 is located, clustered with other amino acids showing point mutations in hematopoietic malignancies) is critical for PHF6 function, and likely mediates important functional interactions with chromatin partners. Our future work will involve dissection of the sequence of molecular events governed by PHF6 following enhancer occupancy, and the role of PHF6 in repressing AML self-renewal and promoting differentiation. 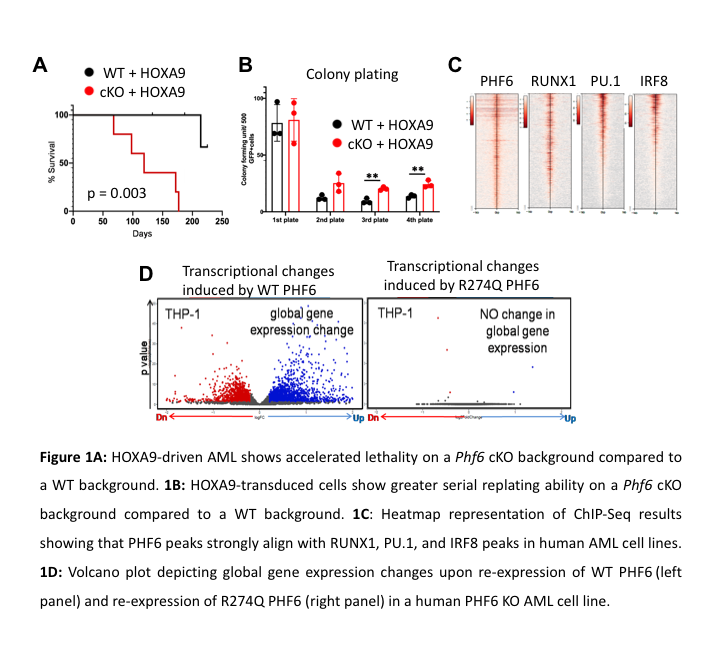