Aims: To provide long term follow up data for the combination of IBR and VEN for R/R CLL patients. IWCLL response status and MRD responses status at the 38 month time point are now presented in this abstract.

Methods: CLARITY is a Phase II trial combining IBR with VEN in 50 patients with R/R CLL. After 2 months of IBR, VEN was added initially at a daily dose of 10mg or 20mg/day escalating weekly to a final daily dose of 400mg/day. CLL MRD was quantified using >6 colour ERIC-standard flow cytometry (detection limit 10-5/0.001%). Paired PB & BM samples were assessed at months 8, 14, 26 and longitudinal PB samples were taken at multiple time points. Fifty-four patients were recruited from May 2016 to November 2017. The median number of prior therapies was 1 (range: 1-6). 20% patients had del(17p); 25% del(11q); 75% had unmutated IGVH. Four patients that discontinued treatment due to ibrutinib-related adverse events in the first 8 weeks before starting VEN were replaced so that, in total, 50 patients received the combination of IBR and VEN. The interruption of therapy was indicated following confirmation of a CR according to the iwCLL2008 criteria and MRD reduction <10-4 CLL cells in PB and BM (MRD4). MRD4 at month 8 indicated to stop IBR and VEN at month 14, MRD4 in PB and BM at month 14 and/or at month 26 indicated to stop IBR and VEN at month 26, while MRD detectable at month 26 indicated to stop VEN only and to continue IBR until progression or toxicity. The trial protocol was amended later in Jan 2019 to allow patients, who had not obtained an MRD4 at month 26, to have an extra 12 months of VEN in addition to IBR.

Of the 50 evaluable patients recruited to the study, 23 patients stopped both treatments at or before M38; the majority due to achieving MRD4 (17/23). 27/50 patients were still receiving at least one trial treatment at this time point, with M38 response data pending for 11 patients. Of the 27 evaluable patients on treatment, the overall response rate (ORR), comprising of 10 patients with CR and 3 with CRi, was 81% compared to an ORR of 91% in the 36 patients receiving at least one trial treatment at M26 respectively. One additional patient discontinued treatment due to MRD negativity after M38. Of the 18 patients stopping due to MRD negativity, 14/18 continue to have <0.01% MRD.

Summary/Conclusion: After 38 months, the response to IBR+VEN is sustained despite planned discontinuation of therapy in MRD negative patients. The initial rate of disease depletion (during the first two months of combined IBR+VEN exposure) is highly predictive of longer-term response to combination IBR+VEN treatment in relapsed/refractory CLL. Patients who do not show rapid disease clearance and have persistent MRD after 12 months of combination IBR+VEN usually have stable or slowly decreasing disease levels akin to that seen in IBR monotherapy. These data will be updated at ASH 2020. 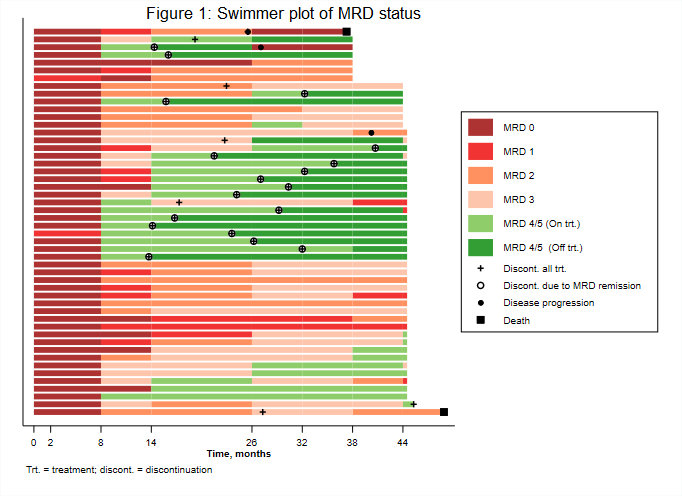